Traversing Chapters > Blog > TBR: 12 books on my “to be read” shelf 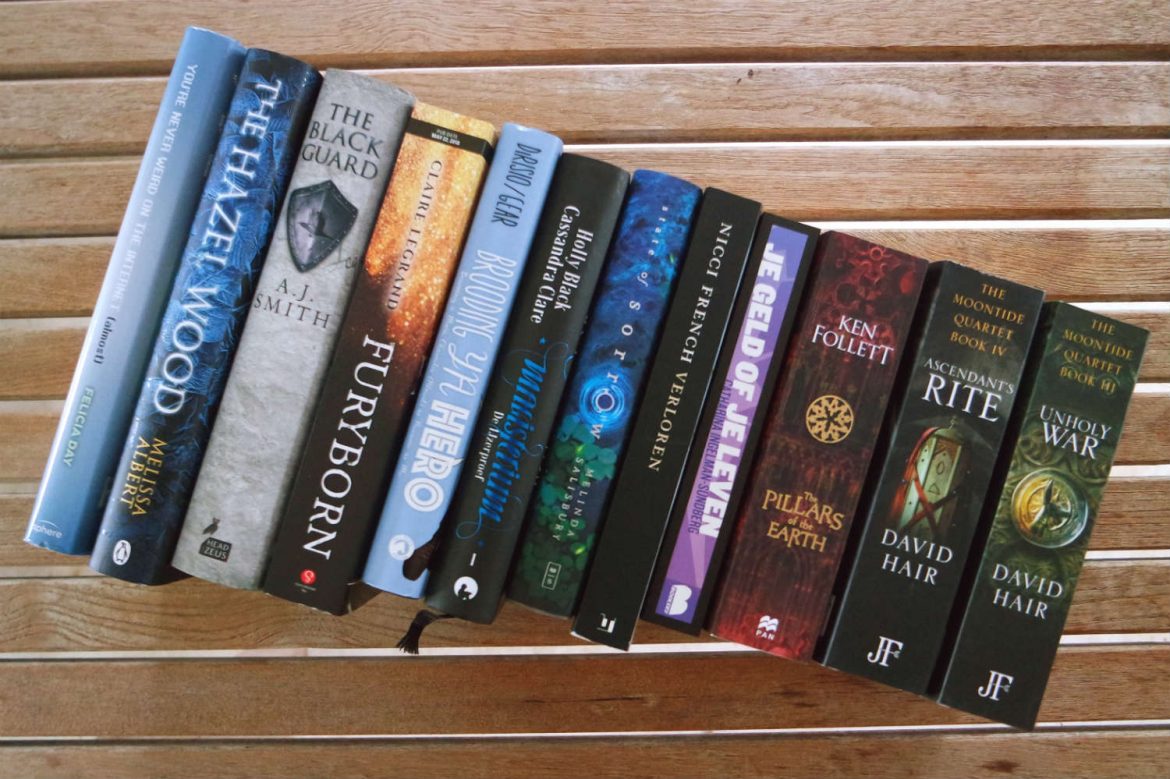 If you are anything like me, you probably have a huge pile of books that you still need to read. My “To Be Read” list (aka TBR shelf) on Goodreads currently includes a staggering 174 books, many of which I will probably never get around to. You see, I keep adding new books to this list. Interesting synopsis? Add! Book by an author I like? Add! Book that is everywhere on Instagram? Add!

So let’s take a closer look at my TBR list. In particular, let’s start with some books I already own that are currently on a designated TBR shelf.

This YA fantasy was the featured book in Fairyloot’s February box. It’s about a girl named Alice whose grandmother, an author of dark fairy tales, dies. When her mother is kidnapped by a figure who claims to come from the world where those fairy tales are set, Alice has to investigate. Her only clue: “Stay away from the Hazel Wood”.

This YA fantasy was the featured book in Fairyloot’s March box. Sorrow governs the Court of Tears, standing in for her father who is overcome by grief. But one ghost won’t stop haunting her, and enemies are moving against her. So Sorrow has to decide how far she is willing to go to win this fight.

Another book I got from a Fairyloot box. In this case we received an ARC (Advance Readers Copy) in November, while the release of this book is next month. So my copy doesn’t have the final cover yet. It’s about Rielle Dardenne, who has the ability to perform all seven kinds of elemental magic. She has to prove that she is the Sun Queen, the queen of light and salvation. If she doesn’t succeed, she will be executed. Parallel with this we follow Eliana, a bounty hunter living 1000 years after Rielle, and who joins a rebel captain.

Becoming a Main Character (Almost) As Awesome As Me – Carrie DiRisio

If you’re on Twitter, go follow Brooding YA Hero! It’s a hilarious account that pokes fun at YA tropes. By doing this, “Broody” offers writing advice for aspiring (YA) authors to avoid pitfalls of stereotypes. I’ve already read the first few pages and it made me laugh out loud a few times, which doesn’t happen often. This book also features illustrations by Linnea Gear.

These are parts 3 and 4 respectively of the Moontide Quartet series. If you love Game of Thrones (A Song of Ice and Fire), you might be interested in this epic fantasy story. Once every 12 years the tides sink and the Moontide Bridge is revealed. This leads to a crusade of conquest between the two continents. In the series, we follow a few key players (or people who will become key players) in this conflict.

Another epic fantasy series. It’s set in a world that is somewhat similar to medieval Europe, but – as with all fantasy – features magic. Powerful houses fight for power, and those that oppose the King and his advisors meet a cruel fate. But the struggles of the mortal are not the only threat to the world, because the children of a dead god are waking. The tag line of the series is “All that was dead will rise, all that now lives will fall”. If that doesn’t sound interesting, I don’t know what does!

Holly Black (The Cruel Prince) and Cassandra Clare (The Mortal Instruments) are two established names in YA fantasy. Magisterium is the result of their collaboration. It’s about a boy whose father has always warned him about the dangers of magic. Callum tries his best to fail the Iron Trial that would allow him to enter the Magisterium, that trains children to become powerful wizard. But the Magisterium appears to have a connection to Callum’s past and future…

The Pillars of the Earth – Ken Follett

If ever a book deserved the word “tome”, it’s this one. Ken Follett takes 1091 pages to tell the story of a monk who wants to build the greatest Gothic cathedral the world has known. We also follow other characters in twelfth-century England, in what becomes a struggle between good and evil that turns church against state and brother against brother. This book was made into a television series, a board game, and a video game.

This one has been on my shelves for a while now. It’s the biography of Felicia Day, who you might know from her work as an actress, screenwriter, songwriter, producer or director. She is also the unchallenged Queen of the Geek Girls, and the voice actress for one of my favourite characters in the game Guild Wars 2. I don’t usually read biographies, but for Felicia I want to make an exception.

I picked this one up at a book fair. Every once in a while I like to read something that is completely different from my usual YA fantasy. And this one is about as different as they come. A group of 5 elderly people are dissatisfied with their lives in a care home. Not only do they rebel against the rules, they also come up with a plan to rob a hotel. And then they get involved in the criminal underworld of Sweden. I can’t wait to read this one, it sounds absolutely hilarious!

And finally we have a book by writing duo Nicci French. I have never read anything by them and their thriller books aren’t really up my alley. But at a quiz I got to choose between this book and 50 Shades of Grey, so that was an easy one! It’s about a woman whose teenage daughter goes missing. Not only that, but no one seems to believe Nina. I have to confess this one will probably remain unread for quite a while, but you never know when I might be in the mood for a contemporary thriller…