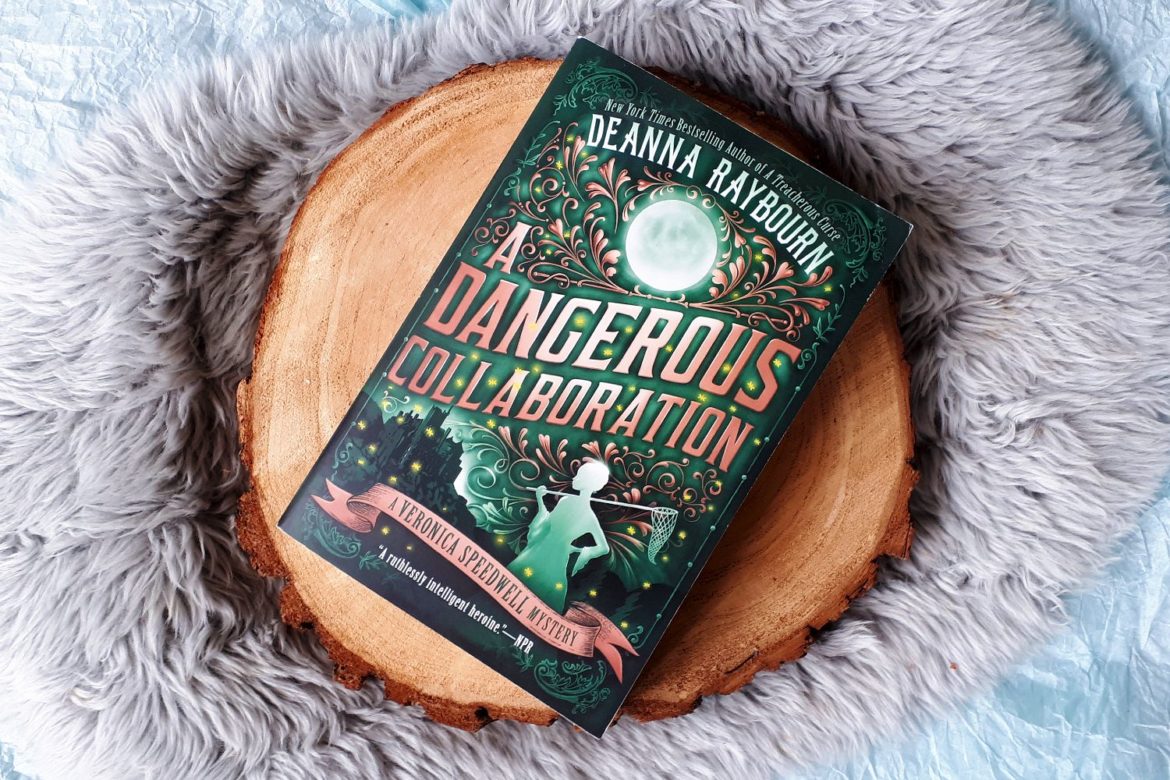 Hi everyone! I hope you are all safe and healthy. Don’t forget to be kind to yourselves, that’s even more important these days! I feel super stressed out currently, so I like to escape into the pages of a book. Fantasy novels that are set in a totally different world/universe are a great way to do that. And from time to time, I like to dive into a cozy mystery. Today’s review fits the latter category: it’s A Dangerous Collaboration by Deanna Raybourn, the fourth installment in the Veronica Speedwell series!

Warning: this review doesn’t contain spoilers for A Dangerous Collaboration, but there might be some (very mild!) ones for the previous books in the series!

After her previous adventure/investigation with Stoker, Veronica now travels to an island off the coast of Cornwall. Stoker’s brother Tiberius has called in a favor and persuades her to pose as his fiancé at Lord Malcolm’s house party. But upon their arrival, it immediately becomes clear this party isn’t as innocent as they’d thought. Every guest has a connection to Lord Malcolm’s wife Rosamund, who disappeared on her wedding day three years ago. Veronica enlists Stoker’s help to discover the host’s true motivations and solve this mystery.

This is the fourth book in the Veronica Speedwell series, which is one of my personal favourite series at the moment. Veronica is such a great and feisty heroine, while Stoker is the perfect brooding sidekick. I adore their interactions, their banter and their chemistry which is through the roof. Those elements, more than the actual mysteries, are what drew me to these books.

Unfortunately, there wasn’t a lot of their typical banter this time around.

Where did the banter go?

The first part of the book seemed to mainly be about Veronica and Stoker, but at the same time not much happened between them. You see, they avoided one another A LOT, and instead we got tons of angsty conflicted feelings. I know it would be weird for the author to keep their obvious mutual attraction going for book after book without progressing their relationship. But this drama didn’t do it for me. There were flickers of the interactions I adored in the previous books, but they were pretty short.

In the previous books, there were also several moments that made me laugh out loud. I will forever remember the scene in the Victorian sex cave with Veronica being fascinated by all the… uhm… props, while Stoker was horrified.

But in this book, there weren’t that many funny moments. And that was a bit of a bummer. It all felt pretty serious instead of lighthearted, while the latter is the reason I love these books so much.

With the first part of A Dangerous Collaboration focusing on Veronica and Stoker’s feelings, it took some time for the actual mystery to truly get going. This mystery was pretty gothic: a manor on a remote island, a missing bride, a seance, ghostly music and the sighting of a spirit. Don’t expect anything too gruesome or scary though, these are still rather cozy mysteries!

That being said, the set-up for the next installment combined with its title – A Murderous Relation – and Veronica’s lineage have me so freaking excited for that one! (It’s already available, but I want to wait for the paperback edition that matches the rest of the series on my bookshelf.)

A bride mysteriously disappears on her wedding day in the newest Veronica Speedwell adventure by the New York Times bestselling author of the Lady Julia Grey series. Lured by the promise of a rare and elusive butterfly, the intrepid Veronica Speedwell is persuaded by Lord Templeton-Vane, the brother of her colleague Stoker, to pose as his fiancée at a house party on a Cornish isle owned by his oldest friend, Malcolm Romilly. But Veronica soon learns that one question hangs over the party: What happened to Rosamund? Three years ago, Malcolm Romilly’s bride vanished on their wedding day, and no trace of her has ever been found. Now those who were closest to her have gathered, each a possible suspect in her disappearance. From the poison garden kept by Malcolm’s sister to the high towers of the family castle, the island’s atmosphere is full of shadows, and danger lurks around every corner. Determined to discover Rosamund’s fate, Veronica and Stoker match wits with a murderer who has already struck once and will not hesitate to kill again.…