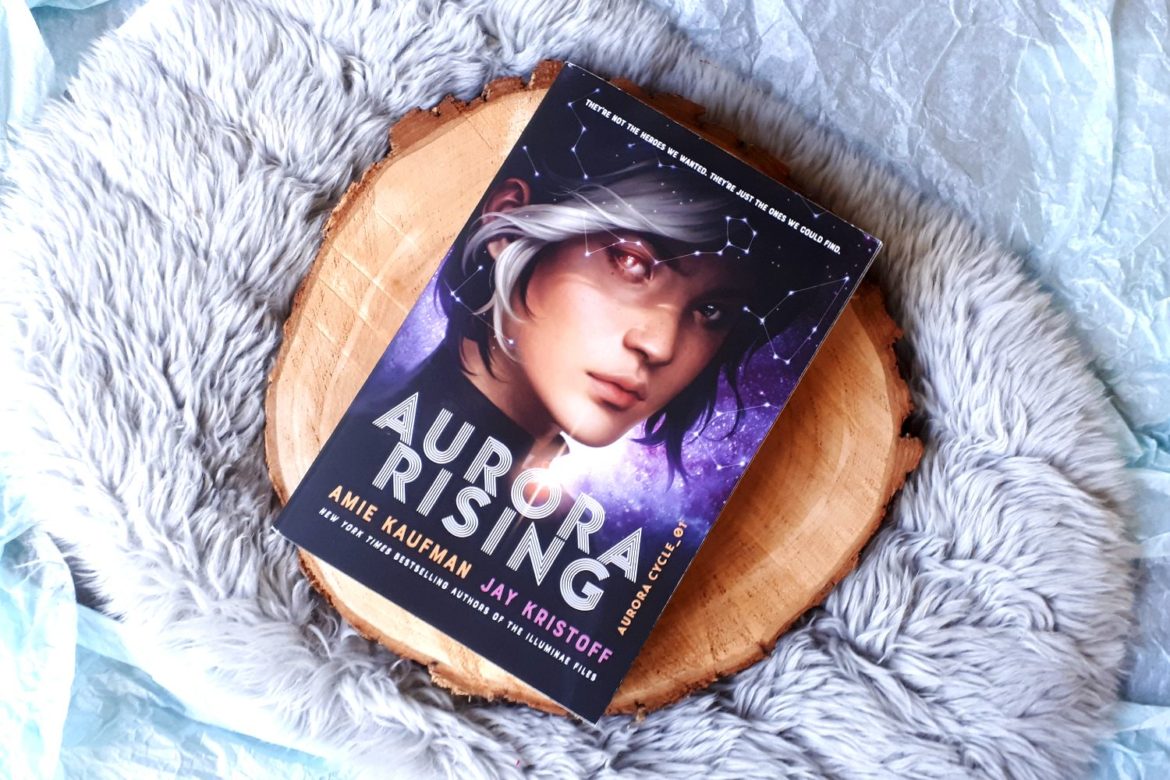 Hi everyone! I hope you’re all safe and healthy, let me know how you’re doing in the comments! I had hoped to (finally!) be able to unbox my March Fairyloot box, but it’s still on its way… So fingers crossed it gets here by next week! In the meantime, let’s do a book review. Here’s what I thought of Aurora Rising, by Amie Kaufman and Jay Kristoff!

Tyler Jones is the star pupil of Aurora Academy. He is ready to recruit the squad of his dreams, but his boneheaded heroism sees him stuck with the dregs nobody else in the Academy wants. And that’s not even his biggest problem. Oh no. There’s also Aurora Jie-Lin O’Malley, the girl he just rescued from interdimensional space. Auri has been stuck in cryo-sleep for two centuries, but could be the catalyst that starts a war millions of years in the making… And Tyler’s squad of losers might just be the last hope for the entire galaxy.

Aurora Rising is written by Amie Kaufman and Jay Kristoff, who have collaborated before with the Illuminae series. I loved Illuminae, so I was excited to read this one. And wow, what a wild ride it was!

An hour after closing the book, my heart was still racing. There was not a single dull moment to be found in these 470 pages! The squad – and therefore the reader – is thrown from one dangerous situation straight to the next threat.

Although, if I’m honest, it wouldn’t have hurt to have some space to breathe from time to time. That would also help to explore the characters’ personalities a bit more. The story is told through 7 (yes, SEVEN!) POVs and the constant hopping around from one to the other makes it so that these characters don’t get a lot of POV time.

That being said, I loved everyone in this squad! Finian was my favourite with his witty remarks. But I also adored Kal, our space Legolas with an anger management problem. And of course Tyler and Auri. And Zila, and Scarlett, and Cat. I mean, just everyone!

If you’ve read the Illuminae series (or Jay Kristoff’s Nevernight Chronicles), you are probably familiar with the authors’ sense of humour. And this book does not disappoint. There are some pretty funny moments and the writing throughout had me smiling.

And did I mention there’s a heist set on a pirate spaceship colony?! That’s right, a good old-fashioned heist!

Aurora Rising does leave us with a bunch of questions that will hopefully be answered in the sequel, Aurora Burning. Luckily, you can get your hands on a copy of that sequel since it was published this week. I know I will definitely be buying it!

The year is 2380, and the graduating cadets of Aurora Academy are being assigned their first missions. Star pupil Tyler Jones is ready to recruit the squad of his dreams, but his own boneheaded heroism sees him stuck with the dregs nobody else in the Academy would touch…

A cocky diplomat with a black belt in sarcasm
A sociopath scientist with a fondness for shooting her bunkmates
A smart-ass techwiz with the galaxy’s biggest chip on his shoulder
An alien warrior with anger management issues
A tomboy pilot who’s totally not into him, in case you were wondering

And Ty’s squad isn’t even his biggest problem—that’d be Aurora Jie-Lin O’Malley, the girl he’s just rescued from interdimensional space. Trapped in cryo-sleep for two centuries, Auri is a girl out of time and out of her depth. But she could be the catalyst that starts a war millions of years in the making, and Tyler’s squad of losers, discipline-cases and misfits might just be the last hope for the entire galaxy.

They're not the heroes we deserve. They're just the ones we could find. Nobody panic.