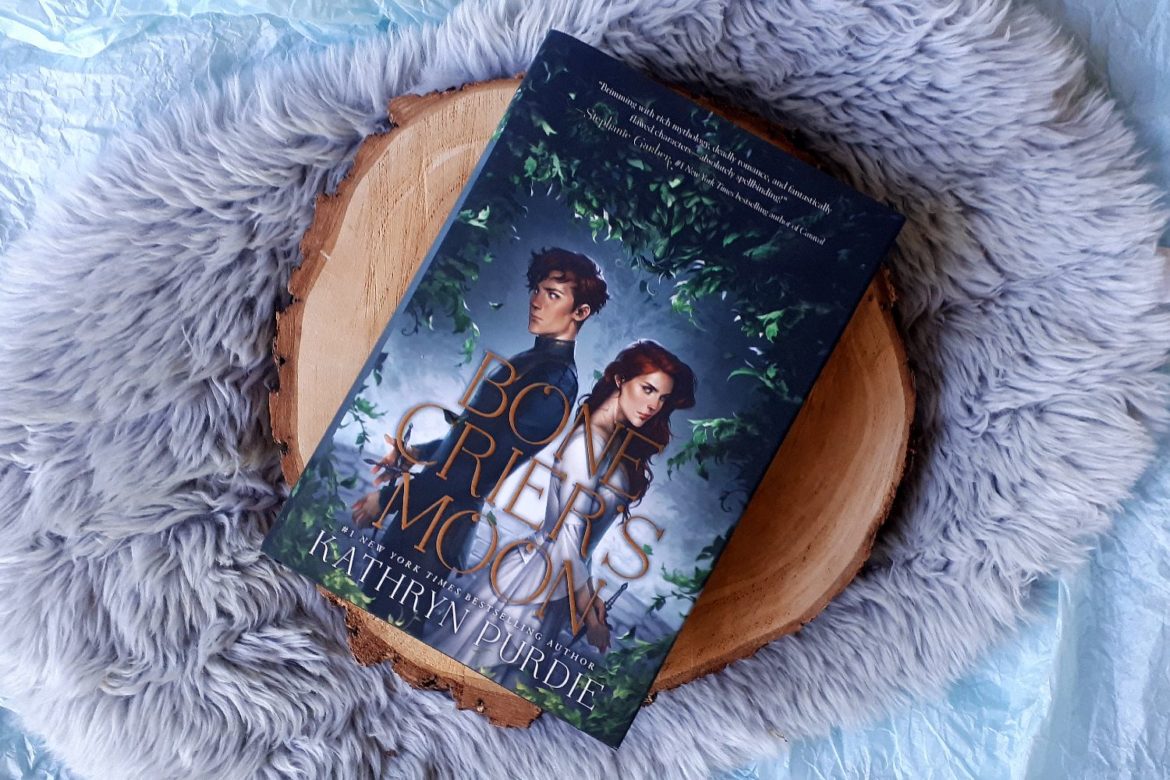 Hi everyone! What’s the weather like where you live? Hopefully you can enjoy it a bit despite *waves hand*. Here it’s been hot – and I mean like, really hot, it might be the first official heat wave of the year. Aaaaaand I hate it. I can’t stand this heat, it makes me want to go nocturnal. Speaking of nights… today it’s time for my review of Bone Crier’s Moon by Kathryn Purdie!

Bone Criers are women who ferry the spirits of the dead into either the Night Heavens or the Underworld. But their power to do so comes from sacrifice. For they have to kill their one true love as a promise of dedication. Ailesse has been prepared since birth to become the matriarch of the Bone Criers, but first she must kill the boy she is destined to love. Bastien’s father was slain by a Bone Crier and he has been seeking revenge ever since. But when he finally captures one – Ailesse – instead of getting his revenge, his faith is now entwined with hers. Meanwhile, Ailesse’s best friend, Sabine, is doing everything she can to save her friend.

No time to rest

Bone Crier’s Moon (which was in the March Fairyloot box) was highly enjoyable, but not without its flaws. There was So. Much. Action. So many fight scenes. You barely get the chance to catch your breath. Which means the story doesn’t get dull, but also that there’s not an awful lot of time for the characters to sift through their emotions.

And despite this book being 460 pages long, that made the characters feel a bit underdeveloped. Sabine, for instance, did a whiplash-inducing U-turn after discovering a secret. This was very jarring, especially since there was barely any concrete evidence. It was basically just another character telling her something.

The story is told through the POVs of Ailesse, Bastien and Sabine. Of these, Sabine was arguably my favourite. Especially early on in the book. Her reluctance to kill animals for their bones and her personality appealed to me a lot!

Because this story is mainly about Ailesse and Bastien and their doomed love, I would have liked to see more attention paid to them falling in love. Now it all felt very sudden (and off-the-page, due to the time-skips).

I know this is the first book in a duology, so it makes sense that we don’t have *all* the answers yet. But I am left with quite a few questions. For instance, can the amouré (the one true love the Bone Crier has to kill) be female? But I’m also not sure I understand the mythology with the gods and the realms of the afterlife. At times, I wondered if I had missed some explanation about them. But hopefully we’ll get that in the sequel!

The sequel – Bone Crier’s Dawn, expected in March 2021 – was set up with a new (and possibly very important) character being introduced quite late in this book, which felt a bit forced. But I do like the setup and I can’t wait to find out what happens next!

All in all, Bone Crier’s Moon gets a solid 4 out of 5 stars from me. It had its flaws, but overall it was a great book!

Bone ​Criers have a sacred duty. They alone can keep the dead from preying on the living. But their power to ferry the spirits of the dead into goddess Elara’s Night Heavens or Tyrus’s Underworld comes from sacrifice. The gods demand a promise of dedication. And that promise comes at the cost of the Bone Criers’ one true love.

Ailesse has been prepared since birth to become the matriarch of the Bone Criers, a mysterious famille of women who use strengths drawn from animal bones to ferry dead souls. But first she must complete her rite of passage and kill the boy she’s also destined to love.

Bastien’s father was slain by a Bone Crier and he’s been seeking revenge ever since. Yet when he finally captures one, his vengeance will have to wait. Ailesse’s ritual has begun and now their fates are entwined—in life and in death.

Sabine has never had the stomach for the Bone Criers’ work. But when her best friend Ailesse is taken captive, Sabine will do whatever it takes to save her, even if it means defying their traditions—and their matriarch—to break the bond between Ailesse and Bastien. Before they all die.