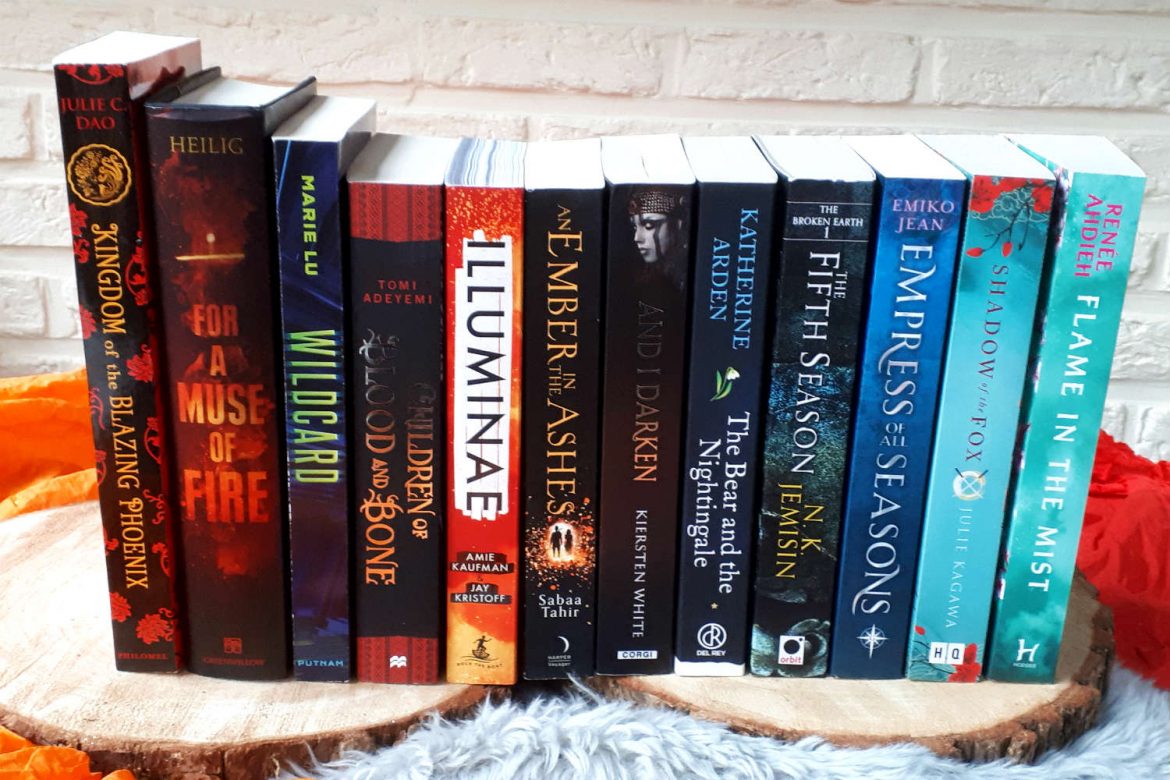 You know what I haven’t done in a long time? A massive book haul! I tend to buy my books in sets of 2 or 3 at a time. But back in March, when I quit my old job, my dear colleagues got me a pretty impressive gift card for a bookstore close to where I live. So this post was made possible by them and that deserves a big thank you! Anyway, it took me forever to decide which books to get, but a few weeks ago, I finally did that. One email and a bit of waiting later, I went to pick up my order. Luckily, I took some extra bags with me, because that was a lot to carry! So what did I get in my latest book haul? Let me show you!

I started with a few sequels to books I love. Kingdom of the Blazing Phoenix is the sequel to Forest of a Thousand Lanterns. It’s set in an east Asia-inspired fantasy world. While the first part was about the rise to power of Xifeng, a servant turned concubine turned empress, the second novel focuses on Xifeng’s stepdaughter and rightful heir to the throne, Jade. This duology is a retelling of the Evil Queen and Snow White, and I’m a sucker for retellings, which is why I also put it on my list of recommendations in November. One concern I have, is that this book has “snow white” Jade as the protagonist and she’s probably going to be a nice character, while Xifeng will likely 1) get less screen time, and 2) be labelled the villain.

This is another sequel, this time to Warcross by Marie Lu. In that first book, we meet Emika, who hacks her way into the biggest virtual reality sensation in the world, the game Warcross. She thinks she’s going to get in trouble when a glitch makes her appear in the middle of a widely-broadcasted competition, but instead receives an offer from the game’s creator to go undercover in the tournament as a spy. Needless to say, in this VR world not everything and everyone is what they seem. I love playing these online videogames myself and I had so much fun with the first book! There were fast-paced action scenes and a few funny references to actual games (and memes like Leroy Jenkins)! You might also remember this from my recommendations in September.

And I Darken – Kiersten White

In this first book of the trilogy, we meet Lada and Radu, the daughter and son of Vlad Dragwlya. They are taken from their father’s court in Wallachia (in what is now Romania) and brought to the Ottoman courts to be raised. While Radu is a gentle boy, Lada is cruel and ambitious. And when they strike up a tentative friendship with Mehmed, the son of the sultan (who is essentially their captor), it creates a toxic triangle. Flawed characters and a historic background? I’m in!

Reading about this book has made me curious about the actual history of the region, but I’m not going to look it up until I’ve read this book. Gotta avoid those spoilers, right? Side note: the third and final book of this trilogy was released in July. So I just might have to order the rest of the series straight after finishing this one.

Shadow of the Fox – Julie Kagawa

Lately, it seems there are plenty of Asian-inspired fantasy stories. One of the latest ones is Shadow of the Fox by Julie Kagawa. Yumeko was raised in an isolated temple, where she has learned to hide her yokai nature, which gives her a talent for illusion. But when the temple is attacked and burned to the ground, she has to flee, carrying with her one part of an ancient scroll that grants a wish to whoever holds it.

Yumeko soon meets Kage, a young samourai, who is hunting for that very scroll. They form an uneasy alliance, but what will happen if he finds out that she holds the artifact he is looking for? As if that isn’t enough trouble, there is also an army of demons chasing them. Sounds fun, right? You might remember this from my recommendations for October!

Empress of all Seasons – Emiko Jean

This is another Asian-inspired novel. In Honoku, a competition is held to choose the new empress. If you survive the enchanted seasonal rooms, you get to marry the prince. That is, if you’re not yokai, supernatural monsters that the emperor has sworn to destroy. Mari has trained all her life for this competition, but – you guessed it – she’s yokai and can transform into a terrifying monster.

Her fate collides with Taro, the prince who has no desire to inherit the throne, and Akira, a half-human, half-yokai outcast. This was on my list of exciting new releases in November, as you might recall, and I can’t to dive in! Subterfuge, hidden abilities and challenges that might kill you? Count me in!

Flame in the Mist – Renée Ahdieh

Mariko is the daughter of a prominent samurai, which means her fate is clear: to marry a political ally. In her case, this is the second son of the emperor. But on her way to the capital, her convoy is attacked by the Black Clan, a mysterious group of bandits. Mariko is the sole survivor and decided to infiltrate this Black Clan dressed a boy, to uncover the reason for the attack.

But during her mission, she finds herself valued for her intellect for the first time in her life, and she starts questioning everything she always thought she knew. Part two of this duology was released in June, by the way!

For a Muse of Fire – Heidi Heilig

Jetta’s family is a famous troupe of shadow players. Their puppets seem to move without strings or sticks. How is that possible? Because Jetta can bind the souls of the recently departed to these puppets. But ever since the colonial army conquered their country, Jetta must hide this secret. Her skill earns Jetta and her family a spot on the royal ship to Aquitan, where – according to rumours – the king has a spring to cure his ills.

But there is a rebellion brewing, and when Jetta meets a young smuggler, she soon faces truths and decisions she never imagined. This book is inspired by Asian culture and French colonialism, and features a main character with bipolar disorder. I’ve been wanting to read this one since its release in September!

An Ember in the Ashes – Sabaa Tahir

Not an Asian-inspired world this time, but one based on the Roman empire. Laia lives with her grandparents and brother in the impoverished backstreets of the Empire. When her brother is arrested for treason, Laia makes a deal with the rebels: they promise to help her brother and in return she will spy for them from without the Empire’s military academy.

There, she meets Elias, the school’s finest soldier, who secretly wants to be freed from the tyranny he is being trained to enforce. This one has actually been on my TBR for two years, but now I’m going for it! It has rebels, spies, a possible enemies-to-lovers romance (I think? Not sure…) and from what I hear, it’s going to rip my heart out. That’s how I like my books! Part 3 of this series was published in June and the author is working on part 4!

This was in March of this year and I have seen nothing but raving reviews! Zélie Adebola’s life is turned upside down when the ruthless king orders the murder of all maji, wiping magic all but out of existence. Now Zélie has one chance to bring magic back, with the help of a rogue princess. Together, they must outrun and outwit the crown prince, who wants to eradicate magic for good. And as if the world wasn’t dangerous enough on its own, Zélie has to fight to control her powers and her growing feelings for an enemy. Hello, enemies-to-lovers trope!

I have to confess that while I’ve read a number of Asian-inspired novels before (and as you notice, will read many more soon), I haven’t read that many stories inspired by African cultures and societies. I definitely want to change that, and I hope this is a good book to start with!

The Bear and the Nightingale – Katherine Arden

Vasilisa lives with her family on the edge of the Russian wilderness. They spend the endless winter nights by the fire, listening to old folk tales about demons, spirits and the importance of rituals to guard their lives from evil. But then Vasilisa’s mother dies and his father brings home a new bride. This devout woman forbids Vasilisa’s family from honoring the spirits.

Soon misfortunes start to happen in the village, crops fail and evil creatures creep nearer. Vasilisa has to call on dangerous gifts she has long concealed and defy the people she loves, in order to save them. If this doesn’t scream “perfect for winter”, I’m not sure what does! Oh, and part 3 is coming to your local bookstore in January.

One day, Essun – living an ordinary life in a small town – comes home to find that her husband has murdered their son and kidnapped their daughter. Meanwhile, the empire collapses as most of its citizens are killed for the vengeance of a madman. And a giant red rift has opened up in the world, spewing ash to darken the sky for years.

Now Essun sets out on a journey to save her daughter, while all around her, the world is dying and war breaks out, not over power, but over basic resources to survive. This is the first part in a trilogy that’s been bombarded with awards. Author N.K. Jemisin has won the prestigious Hugo Award for Best Novel in 2016 for this book. AND in 2017 and 2018 she also received that award for the other books in this series. Which is insane, if you ask me. So expectations are high!

From the blurb: “This morning, Kady thought breaking up with Ezra was the hardest thing she would have to do. This afternoon, her planet was invaded.” In the year 2575, two megacorporations fight a war over a little ice-covered planet at the edge of the universe. Kady and Ezra, who have just broken up, are forced to fight their way onto an evacuating fleet.

And that’s not all. An deadly plague has broken out; the ship’s AI that’s supposed to protect them might actually be their enemy; and nobody wants to explain what is going on. So Kady starts looking for the truth, but soon realises the only person who can help her… is her ex-boyfriend. This book isn’t your typical novel. Instead, the story is told through a dossier of documents: emails, schematics, interviews, and so on. It sounds fascinating and unlike anything I’ve ever read before!

And that’s it! Those are all the books I got in my latest book haul! I am super excited about all of these (duh, it would be weird if I wasn’t, right?) and you can expect reviews for them in the near future.

Have you read any of these? What did you think? And what did you get in your latest book haul? Let me know in the comments! (No spoilers please)