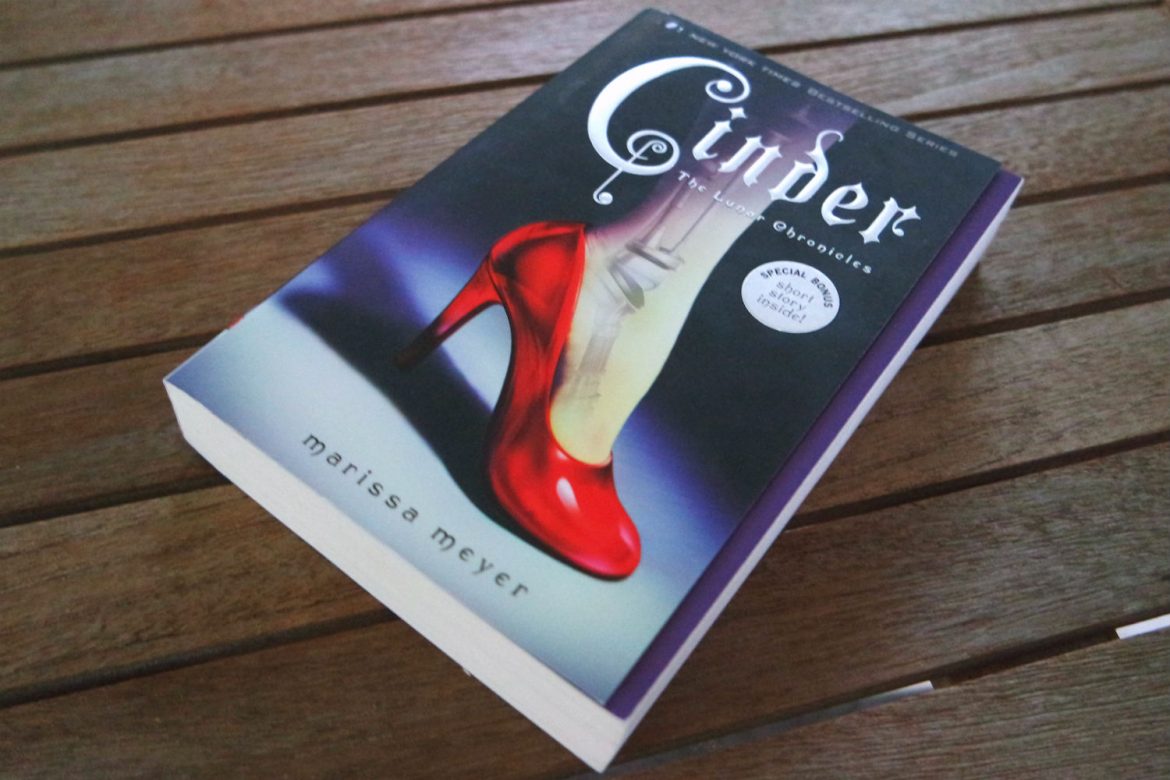 Actual conversation with a colleague:

Colleague: “So, which book are you reading at the moment?”

Me: “Cinder by Marissa Meyer. It’s a Cinderella retelling, but it’s set in the future, in a rebuilt Beijing. Oh, and it has cyborgs.”

The idea of Cinder sounds weird, I admit it. But if you give it a chance, you’ll discover a fun Young Adult book. Not perfect, but definitely entertaining. And if you’re like me, you’ll be hooked and wanting to read the rest of the series.

Meet Cinder, a young girl working as a mechanic in New Beijing. She has a difficult relationship with her stepmother and one of her stepsisters. The other stepsister, Peony, is actually a very nice girl. Oh, and one small thing: Cinder is a cyborg. The accident that killed her parents also left her with serious injuries, so part of her limbs are replaced with cyborg parts.

Cinder’s life is pretty quiet, until one day everything changes. First, she meets Prince Kaito, the emperor’s handsome son. Unfortunately, after that her day and life quickly take a turn for the bad when there’s an outbreak of the plague. Cinder finds herself not only desperately seeking for a cure, but she also ends up in the middle of palace intrigue and diplomacy, that could seal the fate of the entire world.

Entertaining, but not flawless

Like I said in the introduction, it’s an entertaining story. It’s fast-paced, there are plot twists and I really liked the main characters and their interactions. Every YA book needs a great heroine and a cute hero, am I right? Cinder and Kai are perfect together. And every YA book needs a villain as well. Queen Levana is still shrouded in mystery in this book, but I already love to hate her. Hopefully we’ll learn more about her in the next books.

Unfortunately, this book has its flaws as well. The main one being that the big plot twist is quite predictable if you’ve ever read a YA book before. Another issue I had, was that author Marissa Meyer missed an opportunity to explore what makes a person human. Not that I wanted a deeply philosophical novel, but it would have been nice to see Cinder reflect on that.

The ending was quite abrupt, which feels like Meyer is trying to lure readers into buying the sequel, Scarlet. But she didn’t have to worry, I was hooked long before that.

When Cinder, a gifted cyborg with a mysterious past, becomes entangled with the handsome Prince Kai, she finds herself at the center of an intergalactic struggle to save humankind from a deadly plague and ruthless lunar beings.