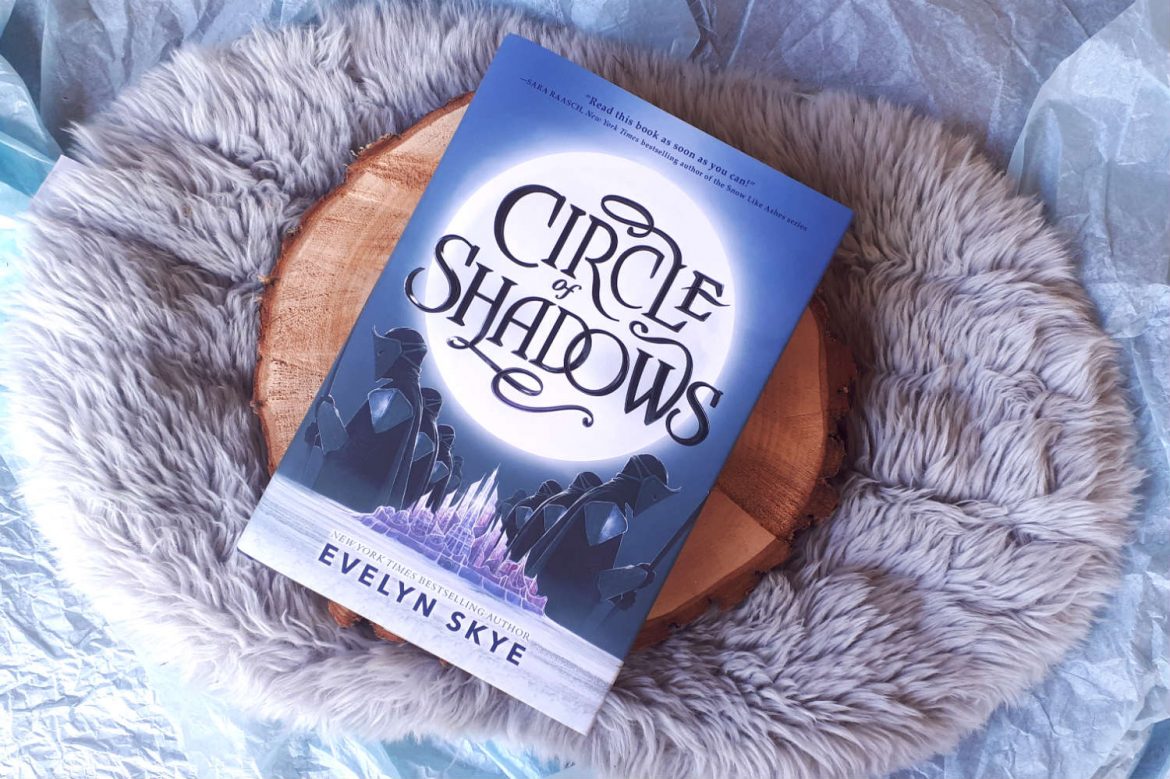 One of the books I was most excited about in January, was Circle of Shadows by Evelyn Skye. I mean, ninja-style warriors, a mysterious group of soldiers and magic? Who wouldn’t be excited?! But did this book live up to my expectations?

Sora and Daemon are apprentice warriors of the society of the Taigas, marked by the gods to protect the kingdom. They aren’t just friends but gemina, bound by magic. Their graduation approaches and they are anxious to prove themselves. So when they discover a camp of mysterious soldiers, they decide to infiltrate the group. Their mission will change their lives forever while the kingdom is under siege.

So, where do I start with this one? It pains me to say this, but this just wasn’t for me. Maybe my expectations were simply too high? The story started great, but then it soon fell flat. Circle of Shadows has so much potential for plot twists and people not being who you think they are, but it never really delivers.

Let me give you an example. The story is told from several different perspectives, Sora and Daemon being the main ones. But early on, there’s a chapter from the point of view of a specific character, who expresses doubt and moral objections. So you would think there is going to be more to it, right? Wrong. This character doesn’t get any POV chapters later on in the story and their conscience seems to have taken a trip to a farm upstate, judging by their actions. Maybe we will get an explanation in the sequels? I don’t know, but if we do, it will feel weird after the events in this book.

That being said, I did love the characters! Especially Daemon was my favourite, together with Fairy. I hope the latter gets more time in the spotlight in the sequel. However, there was some romance and the way it was done bothered me. One character expresses feelings for another character early on (in their internal monologue), but this second character never shows any feelings for the first one… until [specific scene in the final chapters of the book] happens and now we have the perfect set-up for silly drama.

Magic plays an important part in this story, but unfortunately the whole system isn’t well developed. I have no idea how the taigas’ magic works, other than saying things like “I am a spider, I am a spider, I am a spider” to be able to climb trees. That’s just… odd… Do they have a limited set of spells and matching skills, or can you pick any animal you want? I need more explanation for this… I am also not sure how the gemina bond works. How are taigas bonded? I feel like this should have been explained better.

All in all, Circle of Shadows wasn’t a bad book. It just wasn’t a very good one either. It felt a bit too simple, while I love complex stories and layered characters. There is still potential for the sequels to deliver the goods, but this one was a bit of a disappointment.

A thrilling new fantasy series full of magic and betrayal—from Evelyn Skye, New York Times bestselling author of the Crown’s Game series. Sora can move as silently as a ghost and hurl throwing stars with lethal accuracy. Her gemina, Daemon, can win any physical fight blindfolded and with an arm tied around his back. They are apprentice warriors of the Society of Taigas—marked by the gods to be trained in magic and the fighting arts to protect the kingdom of Kichona. As their graduation approaches, Sora and Daemon look forward to proving themselves worthy of belonging in the elite group—but in a kingdom free of violence since the Blood Rift Rebellion many years ago, it’s been difficult to make their mark. So when Sora and Daemon encounter a strange camp of mysterious soldiers while on a standard scouting mission, they decide the only thing to do to help their kingdom is to infiltrate the group. Taking this risk will change Sora’s life forever—and lead her on a mission of deception that may fool everyone she’s ever loved. Love, spies, and adventure abound as Sora and Daemon unravel a complex web of magic and secrets that might tear them—and the entire kingdom—apart forever.