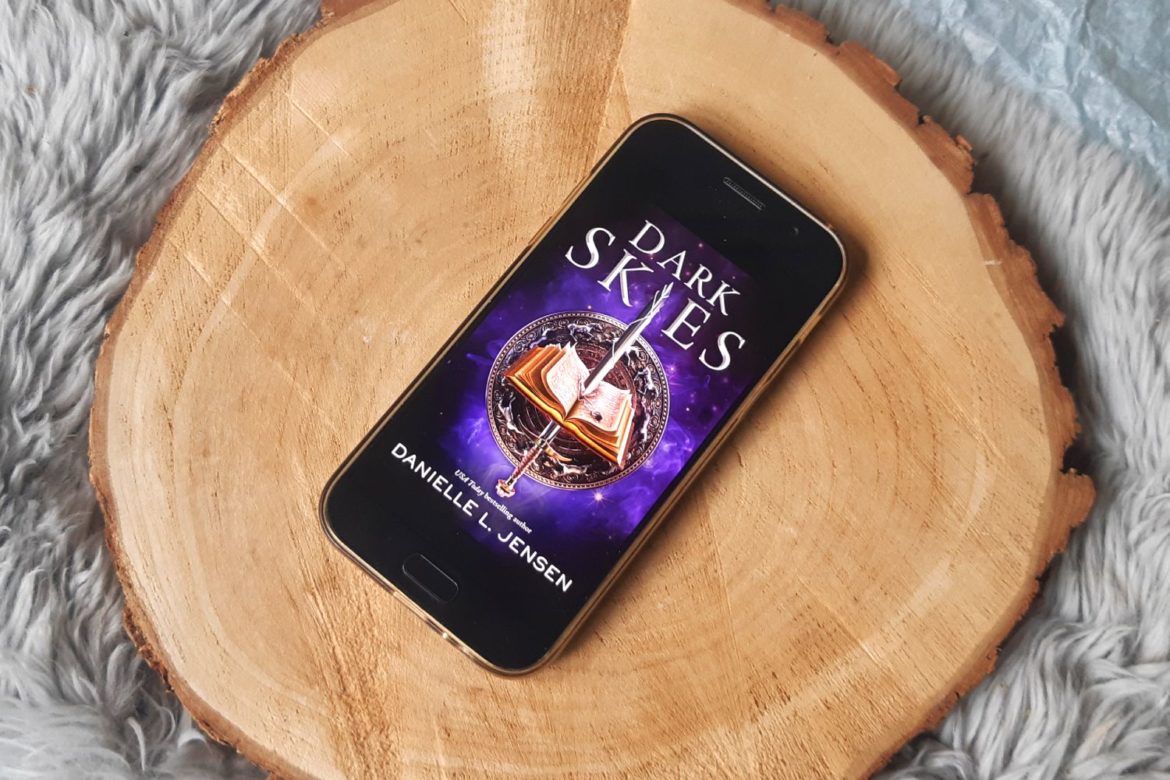 Hi everyone! What have you been reading lately? I hope you can find some distraction from the real world in a great book! I feel like it’s been a while since I did a book review here, so let’s do something about that. Here’s what I thought of Dark Skies, by Danielle L. Jensen! (If you saw my post about May 2020 books, you probably already know which direction this is going to go!)

Thank you so much to TorTeen and NetGalley for providing me with a copy of this book in return for an honest review!

Lydia is a scholar, but when she meddles in the plots of the most powerful man in the Celendor Empire, she finds herself in danger. She manages to escape west, to the far side of the Endless Seas. There, she runs into Killian, Marked by the God War, but disgraced when the Corrupter invades his country. He swears his sword to the crown princess. But this choice catapults him smack in the middle of a web of political intrigue. Lydia and Killian strike a bargain to save the people they love most. But this bargain comes with unintended and disastrous consequences.

A sequel that’s not a sequel

As you might know, Dark Skies is the second book in the series that started with Dark Shores. But what is unique about this series is that you can start either with Dark Shores or with this second book. Because – while the protagonists of that first book make an appearance in this one, Dark Skies focuses on two other characters (Lydia and Killian).

I hadn’t read the first book before picking this up and had no problems at all understanding what was going on. In fact, Dark Shores already was on my TBR list, but now I’m even more curious to read that book and find out more about Teriana and Marcus!

Dark Skies is told through both Killian and Lydia’s POV. Because they are initially on opposite sides of the world, it takes some time for the story to get going. We have to get to know both characters and their respective countries. But once they meet, the story quickly picks up speed.

There is political scheming, an army of corrupted people marching on the city, and a ton of twists. I never knew what to expect! In fact, some YA fantasy stories can get predictable, but – while this story had a familiar structure – there were many unexpected turns that kept me on edge throughout.

I also liked both protagonists. Lydia seemed a bit boring at first, but she was actually very strong and caring. She might not be a fighter in the physical sense of the word, but she stands up for the weak and helps them in her own way. And Killian is kind, yet conflicted. The poor guy carries the burden of being Marked by a god, the guilt of a military mistake, and is torn between his alliances.

Reading Dark Skies was a wild ride that made me even more curious about the first book in the series. So it’s no wonder I give it the full 5 stars! And I already can’t wait for the third book, Gilded Serpent. Even though that one won’t come out until March 2021. Ugh, THE WAIT!

Unwanted betrothals, assassination attempts, and a battle for the crown converge in Danielle L. Jensen's Dark Skies, a new series starter set in the universe of the YA fantasy Sarah J. Maas called "everything I look for in a fantasy novel." A RUNAWAY WITH A HIDDEN PAST Lydia is a scholar, but books are her downfall when she meddles in the plots of the most powerful man in the Celendor Empire. Her life in danger, she flees west to the far side of the Endless Seas and finds herself entangled in a foreign war where her burgeoning powers are sought by both sides. A COMMANDER IN DISGRACE Killian is Marked by the God of War, but his gifts fail him when the realm under the dominion of the Corrupter invades Mudamora. Disgraced, he swears his sword to the kingdom’s only hope: the crown princess. But the choice sees him caught up in a web of political intrigue that will put his oath – and his heart – to the test. A KINGDOM UNDER SIEGE With Mudamora falling beneath the armies of the Corrupter, Lydia and Killian strike a bargain to save those they love most—but it is a bargain with unintended and disastrous consequences. Truths are revealed, birthrights claimed, and loyalties questioned—all while a menace deadlier and more far-reaching than they realize sweeps across the world.