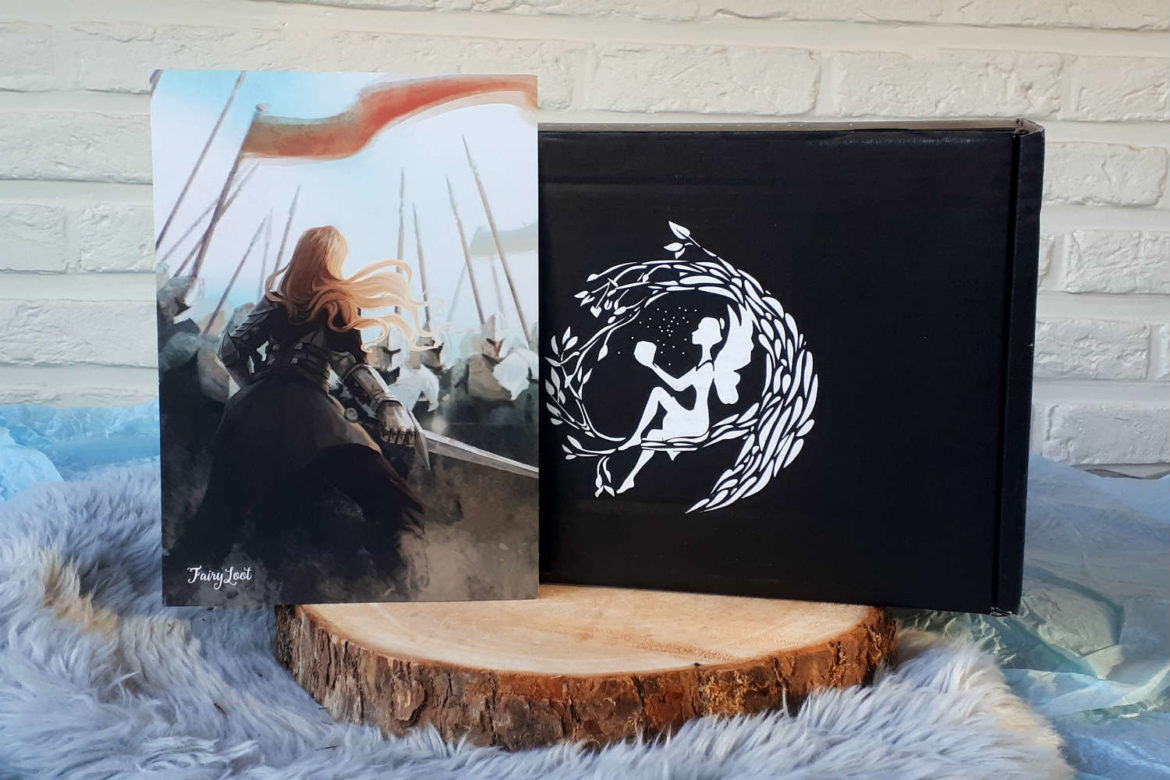 Hi everyone! How are you all doing? I celebrated my birthday earlier this week and got to add a few new books to my collection! Speaking of collecting, I always love unboxing book boxes, because they have so many great goodies. So let’s dive right into the December 2019 Fairyloot box!

The theme was Defying the Odds, and as always, we start with the spoiler card featuring artwork by Taratjah. You can see this card in the big image at the top of this post.

Do you know when you’re officially old? When you have a favourite microfiber cloth. Which I now do, thanks to this box. This cloth was designed by LiteraryLifeCo and features flowers and a quote that reads “My favourite game is called how many chapters can I read in one night”. And I mean, same!

Next up, we have a pin inspired by the YA character that keeps on defying the odds. That’s right, Aelin from Sarah J. Maas’ Throne of Glass series. The pin shows Aelin’s blond hair, with burning flames and the words “Fire breathing bitch queen”, which is her “nickname” in the books. Isn’t it gorgeous?!

As I’m writing this, I’m wearing my fluffy witch socks I got in a previous Fairyloot box. And here we have another pair of socks! Regular ones this time, instead of fluffy ones. They are inspired by Renée Ahdieh’s The Wrath and the Dawn and feature the geometric shapes from the cover of the original 2015 edition. I can’t wait to wear these, since I love red and black!

The next item in the December 2019 Fairyloot box was designed by ChattyNora. It’s a pouch inspired by the Red Rising series by Pierce Brown. I have to confess I haven’t read those books yet, so I don’t know anything about them. But I really like the design on this pouch! The quote reads “Hic sunt leones” and its translation “Here be lions”. I might have to put this series higher on my TBR list!

The following item always comes in handy. It’s a set of 4 pencils inspired by Game of Thrones! Each pencil represents one of the major houses and features their motto. We have the grey “Winter is Coming” for the Starks; the black “Fire and Blood” for the Targaryens; the red “Hear Me Roar” for the Lannisters; and the green “Growing Strong” for the Tyrells. Oh, and each pencil has a little eraser as well!

Brandon Sanderson is one of the biggest names in fantasy and so it’s no surprise that he’s featured in this box. Pigeon.Princess created a set of magnetic bookmarks inspired by the Skyward series. These bookmarks feature Spensa, Doomslug and M-Bot. Aren’t these bookmarks adorable?! I really want to read the sequel, Starsight, so I can find out what happens to these characters!

Speaking of books I am desperate to read: The Priory of the Orange Tree, by Samantha Shannon. It’s an absolute behemoth of a book, so it’ll be important to stay hydrated. Luckily, The Tea Leaf Company created this bag of tea inspired by the character of Ead. It’s black tea with orange pieces and scented with natural orange oil. That sounds perfect! And it’s a pretty big bag as well: 45 grams should last a while. Oh, and the label for this tea was designed by Noverantale!

Next up, we have the traditional tarot cards. We’ve moved on to a new series of books for these. That’s right, these characters are from Sabaa Tahir’s An Ember in the Ashes! I’ve only read the first book so far, so correct me if I’m wrong, but I’m pretty sure these cards show Helene and Elias. They were created by Gabriella Bujdoso and look amazing!

We also have the Fairyscoop newsletter and the bookmark with this month’s artwork.

This is usually the point where I reveal the featured book of the month, but not this time. No, because there is an extra book in this December 2019 Fairyloot box! It’s an ARC (advance reader’s copy) of Rin Chupeco’s Wicked As You Wish. This book will be published in March of this year, but thanks to Fairyloot, we can read it sooner!

This book is about Avalon. Years ago, the magical kingdom was left desolate and encased in ice when the evil Snow Queen waged war against it. That’s also why the crown prince and his protectors are stuck in Arizona. His friend Tala knows this secret – and has a secret of her own: she negates magic. When the powerful Firebird appears for the first time in decades, prince Alexei and Tala unity with a ragtag group of new friends to journey back to Avalon.

Wicked As You Wish comes with a signed bookplate and a letter from the author.

Book of the month

And now it’s time to reveal the featured book of the December 2019 Fairyloot box! It’s… Eight Will Fall, by Sarah Harian! Larkin is an Empath, able to sense the emotions of others and siphon them to either conjure or destroy. But magic is illegal in Demura. When Demura falls prey to an ancient evil lurking beneath the surface, Queen Melay calls on Larkin and seven other outlaws to save the kingdom. Larkin and her party must use their forbidden magic to survive what lies in wait. But when their band is pick off one by one, Larkin and one of her new companions discover they were chosen for a reason.

This sounds like it could be creepy! Oh, and this is an exclusive edition of this book: the cover is red instead of blue, there’s embossing on the hardcover, the book is signed by the author *AND* it features artwork (by CrookedYew) on the reverse of the dust jacket! It also comes with a letter from the author with character artwork on the back.

And that’s all the contents of the December 2019 Fairyloot box. What were your favourite items? Mine were the socks, the tea and the microfiber cloth!