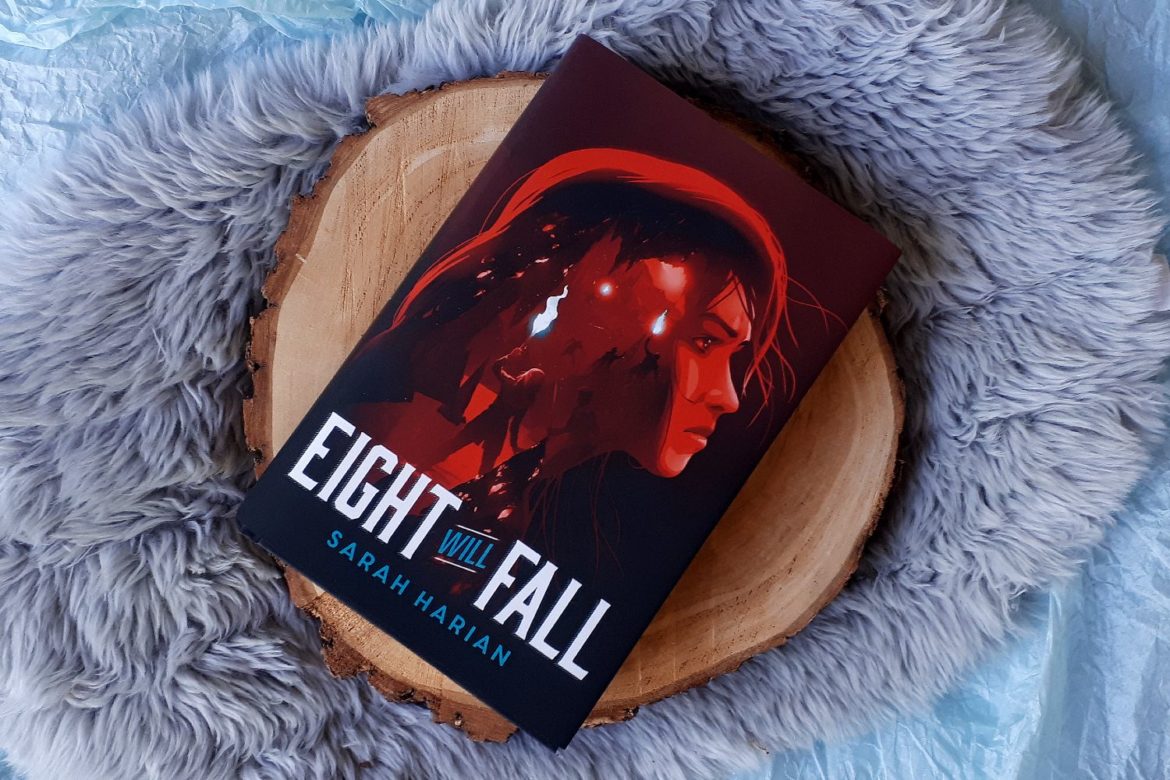 Hi everyone! I genuinely don’t know what to write in this intro today due to *gestures at world*, so let’s move on to the review. Here’s what I thought of Eight Will Fall by Sarah Harian.

Larkin is an Empath. That means she can feel other people’s emotions and use them to do magic. But this magic is outlawed and anyone who uses it, is persecuted. Then, one day, Larkin is taken to the queen, who sends her and seven other criminals to an underground realm to kill an ancient evil that plagues the kingdom. Down in those caves, the team encounters unspeakable horrors. And Larkin learns the eight of them were chosen for a reason. They were also never meant to return…

Eight Will Fall was the featured book in the December 2019 Fairyloot box and it sat on my shelves for a couple of months before I finally picked it up. But in April, I finally did. And it left me a bit conflicted…

I really liked the magic system. It was so fascinating to see how these Empaths could use emotions to either create or destroy. Larkin and the others have always been taught that this magic is forbidden, and using it could cost them their lives. But in the underground realm, they need their magic to survive. Unfortunately, because they weren’t allowed to use it before, they (and especially Larkin) are not familiar with what it can do. It was fun to read how Larking came into her own.

I also liked Amias, one of Larkin’s teammates. Because I’m a sucker for brooding guys with dark and troubled backstories. And Amias fits that description perfectly.

Unfortunately, the other characters were less fleshed out. It’s pretty clear who is going to die based on how well they are developed. So not only was it hard to connect to these characters because they didn’t feel “real” and I didn’t know much about them. It also made the story predictable. Who’s the least fleshed out character still alive? Oh, they’re next.

Speaking of predictable… The supposedly big “OMG Revelation!” might as well have used big neon signs, because I could see it coming from miles away. And it wasn’t predictable because the author threw breadcrumbs to follow. No, it was predictable because I’ve seen this particular twist before. No worries though, I won’t spoil it for you!

Apparently, Eight Will Fall was originally conceived as a duology, but reshaped into a standalone. And it shows. Not only through the superficial character development. The pacing in the final part was also off and felt terribly rushed. I wanted more time to see the events unfold in a way that felt more realistic or natural, if you get what I mean…

And while I didn’t like the way the ending unfolded (specifically the pace at which everything happened), I did enjoy the action in the first part of the story. It was filled with gore. So much gore. Seriously, don’t read this while eating, unless you have a strong stomach. It’s nowhere near the horrors of The Poppy War, where it’s humans killing one another. Here, it’s creepy creatures in the dark caves. But it’s still disgusting at times.

So all things considered, Eight Will Fall was an okay read. It wasn’t terrible and I liked Amias, the atmosphere and the magic system. But the side characters were a bit underdeveloped and the pacing was off at the end was off, making it hard to truly get into the story.

"Adventurous and imaginative, Harian imbues the world of Demura with an infectious charm and energy, and just enough danger and darkness. A gorgeous fantasy that will hook readers from page one."—Madeleine Roux, New York Times-bestselling author of the Asylum series Lovers of dark, high-octane adventure will be enthralled by Sarah Harian's Eight Will Fall, a genre-bending YA fantasy standalone, perfect for fans of Kendare Blake and Leigh Bardugo. In a world where magic is illegal, eight criminals led by rebellious Larkin are sent on a mission to rid their realm of an ancient evil lurking beneath the surface. Descending into a world full of unspeakable horrors, Larkin and her crew must use their forbidden magic to survive. As they fight in the shadows, Larkin finds a light in Amias, a fellow outlaw with a notorious past. Soon, Larkin and Amias realize that their destinies are intertwined. The eight of them were chosen for a reason. But as the beasts grow in number and her band is picked off one by one, Larkin is forced to confront a terrible truth: They were never meant to return.