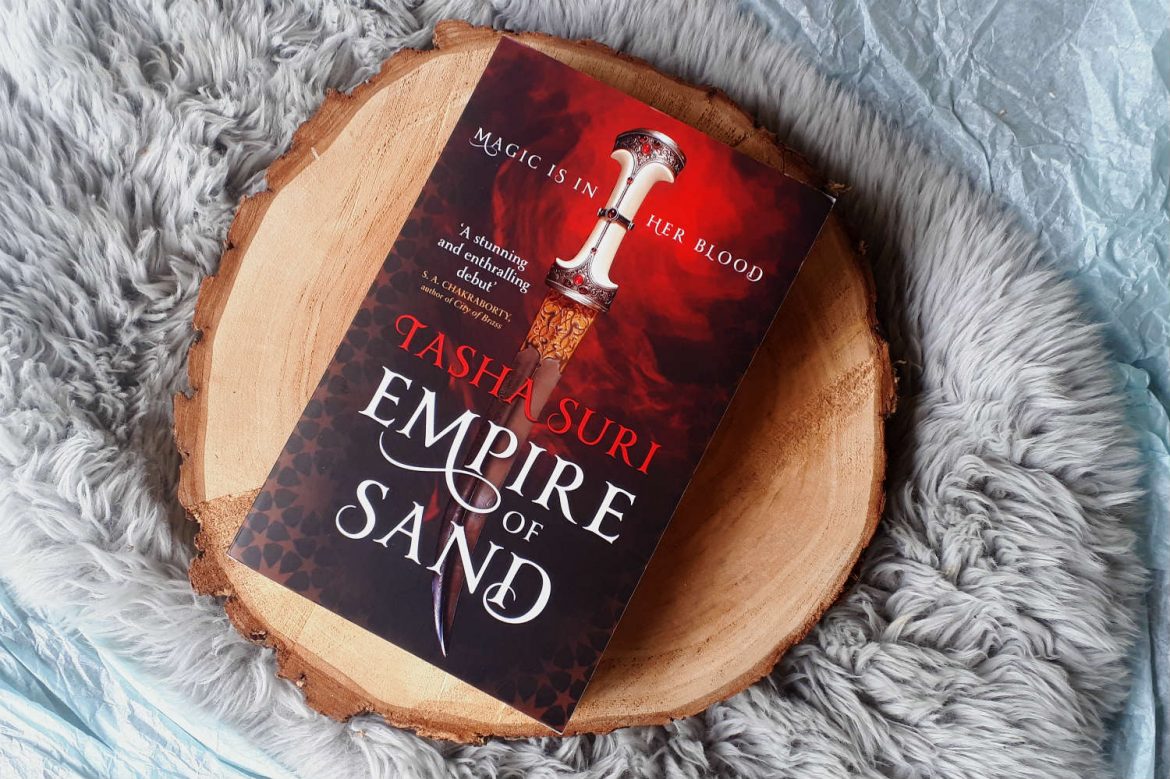 Hi everyone! It’s Friday and that means it’s time to make plans for the weekend. What are you reading? I’m about halfway through Nocturna, so keep an eye out for that review in the near future. But for now, let’s talk about Empire of Sand, by Tasha Suri!

Mehr is the daughter of an imperial governor and is used to living in wealth. But on her mother’s side, she is half-Amrithi, nomads and outcasts who are persecuted for the magic in their blood. When Mehr’s powers draw the attention of the Emperor’s mystics, she is forced to marry an Amrithi boy and combine their powers to control the gods and make them do the empire’s bidding. Can she resist their cruel agenda?

I read this book during a record setting heat wave a few weeks ago. Because reading a book that’s set in the desert seems like the best possible choice then, right? And it was! Empire of Sand is an intriguing story about choices and sacrifices. Mehr struggles with her Amrithi heritage and her place in the world. Not just as someone who is part Amrithi, but as the illegitimate daughter of a nobleman, and as a woman. For example: she is used to staying indoors, in the women’s quarters of their home. And when she does go outside, she is supposed to cover her head and avoid eye contact.

There is some romance in this book as well. Which probably won’t surprise you, with the whole forced marriage thing. But it never gets cheesy. Amun (the love interest) is a great character, in a sort of sweet cinnamon roll way. Mehr, on the other hand, is stubborn and strong, and doesn’t let despair take her down. I’m all here for women who don’t wait around until some knight in shining armor comes to save them, so yay for Mehr!

The world itself is also fascinating. From what I gather, it is inspired by the Mughal empire, with plenty of added fantasy elements of course. As I’ve mentioned before, I love reading fantasy inspired by civilizations that are not Europe-during-the-Middle-Ages. And I’ve read a number of fantasy novels inspired by Chinese and Japanese history and mythology, while other settings are still a bit of a blind spot on my bookshelves. So thank you, Tasha Suri, for writing this story!

Tiny glimpse of the empire

Empire of Sand provides a well developed setting and I loved the magic and mythology of this world! But I would have liked to see more of the empire. Now we spend the entire book in just one province, while I really want to know more about the empire as a whole. But if I’m not mistaken, there’s a second book on its way that focuses on Mehr’s sister, so we’ll probably explore more of this world in Realm of Ash.

So if I enjoyed Empire of Sand so much, why am I only giving it 4 stars instead of 5? Well, because it didn’t blow me away. I had fun reading it, but I didn’t crave it during the day. And while it definitely had great moments, I never felt any big emotions. That might also have been the heat wave though, so don’t let this discourage you from picking up Empire of Sand!

Mehr is a girl trapped between two cultures. Her father comes from the ruling classes of the empire, but her mother's people were outcasts, Amrithi nomads who worshipped the spirits of the sands. Caught one night performing these forbidden rites, Mehr is brought to the attention of the Emperor's most feared mystics, who try to force her into their service by way of an arranged marriage. If she fails in their bidding, the gods themselves may awaken and seek vengeance... From British debut author Tasha Suri, Empire of Sand is a lush and beautiful tale set in a magical world inspired by medieval India.