Empress of All Seasons – Review 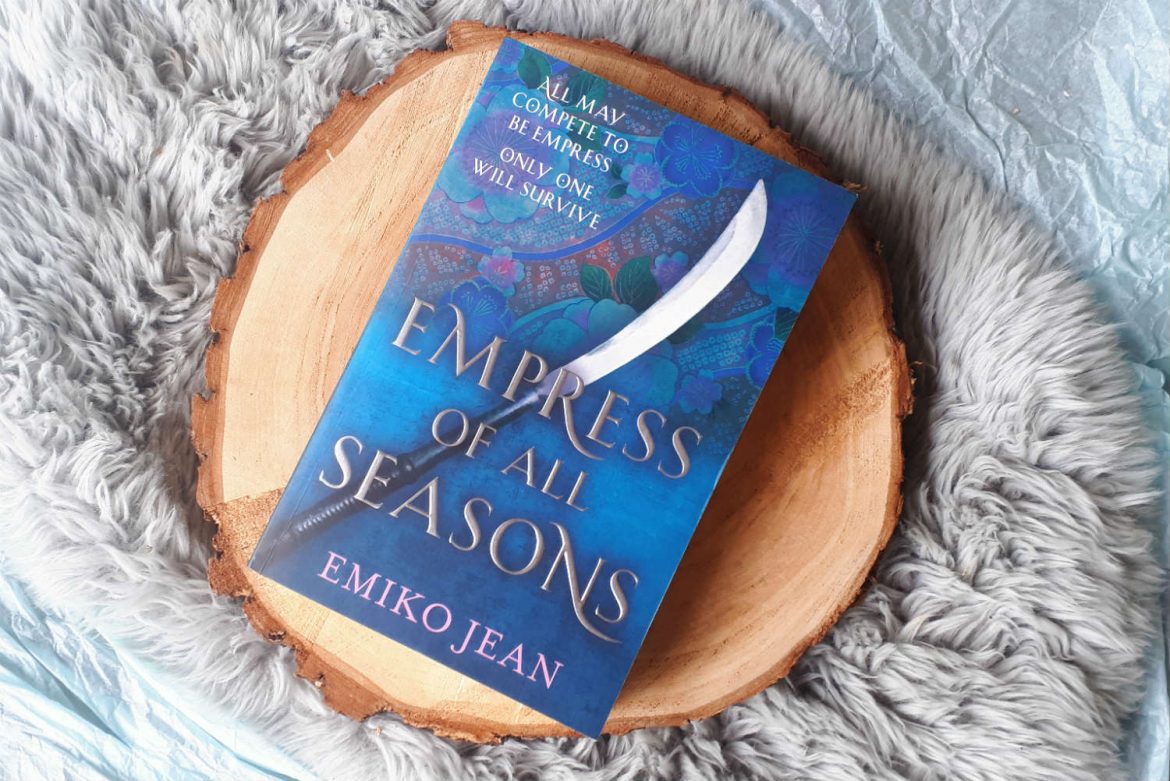 Hi everyone! I hope September is off to a great start for you! Now that Halloween is on the horizon, it’s prime reading season. So run to your local bookstore and buy a newly published book, or catch up with your TBR list. Which is what I did with Empress of All Seasons by Emiko Jean. Here’s my review!

Every generation, all girls of Honoku get a chance to compete in a competition. Whoever survives the palace’s enchanted seasonal rooms gets to marry the prince. Everyone is eligible to compete, except yokai – supernatural monsters and demons. But this doesn’t stop Mari from trying. Her life and fate collide with that of Taro, the prince who doesn’t want to become emperor, and Akira, a half-human and half-yokai outcast.

This started out really well. Mari’s background story was interesting and I was intrigued by her village of yokai women who seduce men to steal their wealth. The seasonal rooms in the palace were fascinating as well, although I wasn’t quite sure how that worked. I mean, at one point they mention a mountain in one of those rooms. So is that room the size of a city, or is there some sort of downsizing magic at work for the people inside? I was confused.

Unfortunately, I wasn’t a big fan of Taro. The prince at first doesn’t want to have anything to do with the competition and even plans to run away. But then he meets Mari and suddenly he’s the competition’s most enthusiastic viewer? There was a lot of insta-love going on there and I just… didn’t feel it. It felt more like Taro’s always been very much on his own and then he meets a random girl and he’s head over heels.

I also had major issues with Taro’s character development in the finale of the story. I won’t spoil anything, but it did not feel realistic at all. It was as if he was a different guy. So the finale, while having a few kickass characters and events, also made me go “WTF”. And that’s a shame for a book that started out great and had so much potential.

While reading, I wasn’t sure if Empress of All Seasons was a standalone or if there would be a sequel. The finale definitely seemed to set up a few interesting chess pieces for a sequel, but then we were hit with an epilogue. A two-page epilogue that rushed through an entire book worth of events and developments. Two pages! That was weird and disappointing. I don’t know whether that decision was made by author Emiko Jean or by her publisher, but I didn’t like it. And it left me with a bit of a sour aftertaste after closing this book.

This rushed ending also made the pacing feel waaaaaay off. The beginning and middle were quite slow, with detailed descriptions of the competition in the seasonal rooms. Not boring, mind you, I liked this part a lot. But then that finale and epilogue happened and wow, so many events in such a short time.

To sum things up, Empress of All Seasons gets three stars from me. It started off great and I loved the competition. But there was too much insta-love and Taro’s character arc was weird. I also wish there would be a sequel instead of that whiplash epilogue. If they had done just that one thing differently, this might have been closer to 4 stars.

Each generation, a competition is held to find the next empress of Honoku. The rules are simple. Survive the palace’s enchanted seasonal rooms. Conquer Winter, Spring, Summer, and Fall. Marry the prince. All are eligible to compete—all except yōkai, supernatural monsters and spirits whom the human emperor is determined to enslave and destroy.

Mari has spent a lifetime training to become empress. Winning should be easy. And it would be, if she weren't hiding a dangerous secret. Mari is a yōkai with the ability to transform into a terrifying monster. If discovered, her life will be forfeit. As she struggles to keep her true identity hidden, Mari’s fate collides with that of Taro, the prince who has no desire to inherit the imperial throne, and Akira, a half-human, half-yōkai outcast.

Torn between duty and love, loyalty and betrayal, vengeance and forgiveness, the choices of Mari, Taro, and Akira will decide the fate of Honoku in this beautifully written, edge-of-your-seat YA fantasy.