Traversing Chapters > Blog > Facets of Fantasy: Around the World

Facets of Fantasy: Around the World 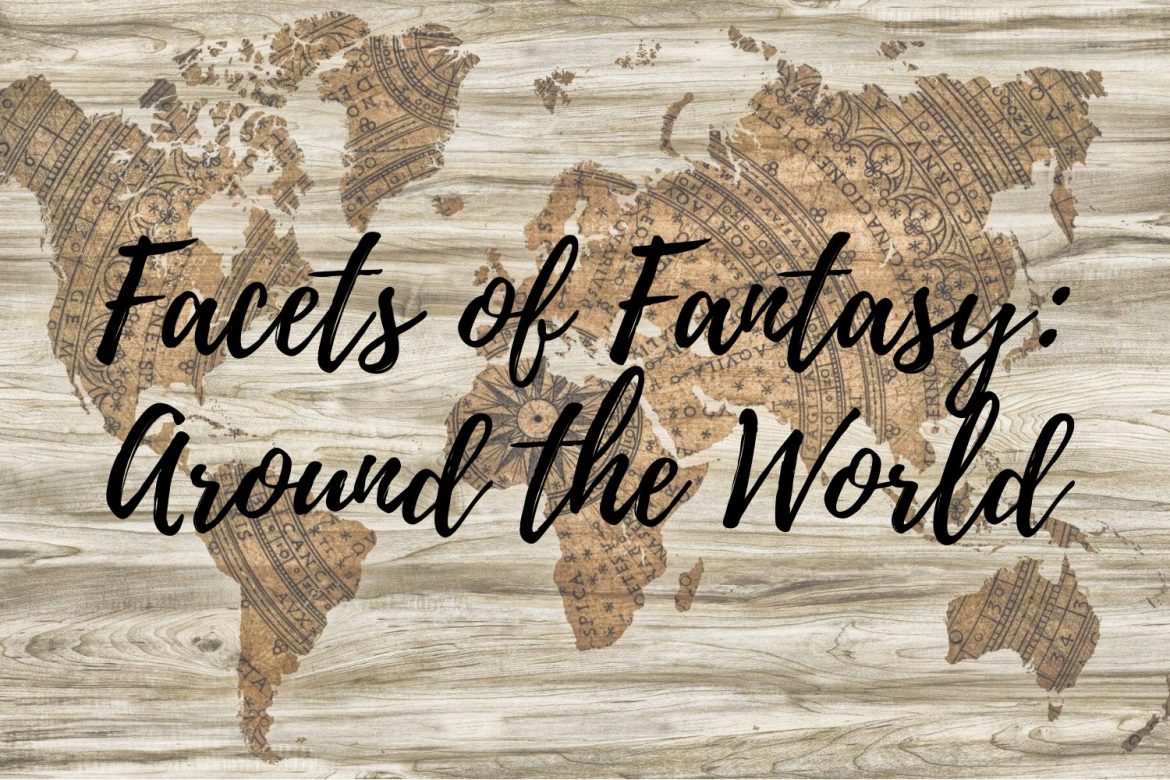 Hi everyone! You might remember my post from last month in which I complained about a lack of fantasy novels at the biggest Belgian book fair. In that post, I explained that there is so much more to fantasy than the well-known Lord of the Rings and Game of Thrones. So I think it might be a good idea to have a look at all that the fantasy genre has to offer. Today, I want to kick things off with the basics: in what kind of world does the story take place?

Firstly, we can split up these settings in two – or three, if you will, groups: those set in the real world, the ones set in completely made-up worlds, and the ones that combine the two.

Is this the real life?

Let’s start with the stories that take place in the real world. These stories add some fantastical elements to our everyday lives, to make things a bit more interesting (and often dangerous!). Can you think of a book series that does this? I’m sure you can name a few.

In fact, some of the most popular books of the past 20 years belong in this category. Yes, I’m talking about Twilight and Harry Potter! While our favourite boy-wizard spends most of his time in wizards-only locations, the fact that this all happens in “our world”, makes it easy for children (and – let’s be honest – adults) to dream of receiving a letter from Hogwarts themselves, and facing magical threats by casting spells. And isn’t it fun to see how wizards look at Muggles and their quirks?

Outlander is another story that fits in this first category. In this book, a nurse from 1946 accidentally travels back through time to the Scotland of the middle of the 18th century. But this focuses so much on (well-researched) history and it keeps the fantasy elements purely limited to the time-travel, that some people might not even want to call it fantasy.

Is this just fantasy?

But as a writer, you can also go the Tolkien way and create a whole new world from scratch. Here, you’re no longer bound to our real world map, technology or laws. This is probably the type of fantasy most people think about when you mention the genre. And that’s no wonder: this is the category of The Lord of the Rings and A Song of Ice and Fire (aka Game of Thrones), among many, many, MANY others.

Now, you might have noticed that George RR Martin’s map of Westeros looks quite similar to the UK. Especially The North can be compared to Scotland and its warriors of old. And a large continent to the East, across a narrow sea? That sounds familiar as well! This is not uncommon in fantasy novels about made-up worlds, but more on that later.

The third and final category is that of the mixed settings. Stories that take place in both the real world and a (parallel) fantasy realm. The first that comes to mind here is The Cruel Prince, by Holly Black, in which the main character is a human girl who was kidnapped to the fairy realm. But she can still visit the real world. Another popular example is A Curse So Dark And Lonely, by Brigid Kemmerer, in which a girl is kidnapped from the streets of Washington, D.C., and taken to the fantasy kingdom of Emberfall.

(Now, it could be argued that Harry Potter belongs in this category as well, because of the locations that are only visible and accessible to wizards. But I since these wizards never travel to a parallel dimension, I would put HP in the real-life category.)

Over the hills and far away

That’s one way to divide stories, but there are more. We can also look at the locations where these stories take place. Where do we place them on our world map? Or what real-life locations/cultures are they based on? Let’s take a look, shall we?

First, we visit LOTR and ASOIAF again. These worlds are both strongly inspired by medieval England: the feudal system and the clothes might as well come from a documentary about the Tudors. I mean, ASOIAF is partly inspired by the Wars of the Roses, Robert the Bruce, the Black Dinner, and so much more.

And, as George RR Martin himself has said:

“The Dothraki were actually fashioned as an amalgam of a number of steppe and plains cultures… Mongols and Huns, certainly, but also Alans, Sioux, Cheyenne, and various other Amerindian tribes… seasoned with a dash of pure fantasy.”

You don’t like to read about medieval-England-but-with-dragons? No problem, there are countless other settings in fantasy stories!

First, let’s look at some examples that draw inspiration from Europe, past and present. It probably won’t surprise you that Ireland is pretty popular: Daughter of the Forest, for example, takes place in a fantasy version of medieval Ireland. Or Beyond a Darkened Shore, which combines Celtic mythology with that of the Vikings.

Speaking of Vikings, these warriors are pretty popular in fantasy. Sky in the Deep is the first that comes to mind. If you’re into Thor and Loki, there’s also Neil Gaiman’s book that’s literally called Norse Mythology, or The Gospel of Loki.

How about some Eastern European settings? Naomi Novik’s books Uprooted and Spinning Silver both take place in medieval Poland, but add a few spoonfuls of folklore and magic. There’s also Emily A. Duncan’s Wicked Saints (which I haven’t read yet, but it’s on my wish list for Christmas!) that draws from Polish and Russian folklore.

Of course, we can’t talk about Russian-inspired fantasy without mentioning Leigh Bardugo’s Grishaverse books (coming soon-ish to Netflix, by the way! AAAAAAGH!!!). The Shadow and Bone trilogy and the Nikolai duology are set in a country that sounds very Russian: its name is Ravka, the main character’s last name is Starkov, and so on.

And for the spin-off duology Six of Crows, Bardugo takes us to Ketterdam, a city that reminds me of Amsterdam.

Further south, we have The Lies of Locke Lamora in a city that sort of resembles Venice. Or we can go the Nevernight way and have a society that’s clearly Roman. I mean, the ruler is a Consul named Julius Maximillianus Scaeva. Another example is Sabaa Tahir’s An Ember in the Ashes, where the Martial Empire sounds a lot like Roman society.

Let’s leave Europe and travel to the east, shall we? Our first stop is the Middle East. In We Hunt the Flame (also on my wish list), we explore the kingdom of Arawiya, which sounds a lot like Arabia, doesn’t it? And in Rebel of the Sands, the setting mixes the Wild West with Arab mythology.

Further east, we find even more inspiration. Empire of Sand draws from India’s Mughal empire, while The Poppy War (on my TBR pile) is based on Chinese history and the Sino-Japanese war. Japan is also a popular setting: Shadow of the Fox and Flame in the Mist immediately come to mind. And Girls of Paper and Fire takes us to a world inspired by Malaysian culture.

Or, if you like to read a book inspired by an French opera that in turn was inspired by a Persian fairytale, but set in the Mongol Empire, I can really recommend The Bird and the Blade!

Let’s say goodbye to Asia and journey to Africa. Now, I have to confess that I don’t know that many fantasy stories in settings inspired by Africa. I really need to do something about that, so I’ll try to read more of these next year!

But for now, I can recommend A River of Royal Blood (a recently published novel about two sisters who have to kill each other to claim the throne). And of course, there is Children of Blood and Bone (and its sequel, Children of Virtue and Vengeance). This one is next on my TBR list, so keep an eye on this blog for my review in the coming weeks! But I can already tell you that it draws from Nigerian mythology, as does Beasts Made of Night.

And finally, let’s jump across the Atlantic and see what the Americas have to offer. As with African-inspired novels, I definitely need to pick up more latinx books! I did read Nocturna this year. Other stories that draw from latinx culture (but that I haven’t read yet) are Bruja Born, We Set the Dark on Fire, Blanca & Roja, and more.

Now, I must admit I can’t really think of fantasy stories that take place in fictional versions of North America. Twilight is set in the real world, as is the Mortal Instruments. The Beautiful is a vampire story set in 19th century New Orleans.

The Hunger Games and Scythe both take place in a future version of the United States, but neither has magic or mythical creatures. So science-fiction might be a better label than fantasy for these? But these two genres are often lumped together, so let’s just add them here as well.

There are other examples of these alternative realities. Take The Beholder for example. This is clearly an alternate version of our world, in which the main character travels from the region of Potomac (as in, the river in North America) to England and Norge (you know, Norway).

And thus we have finished our little journey around the globe. There are of course many more examples of fantasy stories inspired by cultures across the world, but it would be impossible to mention all of them.

In future installments of this series, I will take a look at the creatures that make an appearance, the different types of magic, the themes these books explore, and more!

For now, let me know what your favourite kind of setting is for fantasy novels. And feel free to ask me for suggestions. Or give me suggestions for books with interesting settings I should read!

around the world, facets of fantasy, fantasy, setting