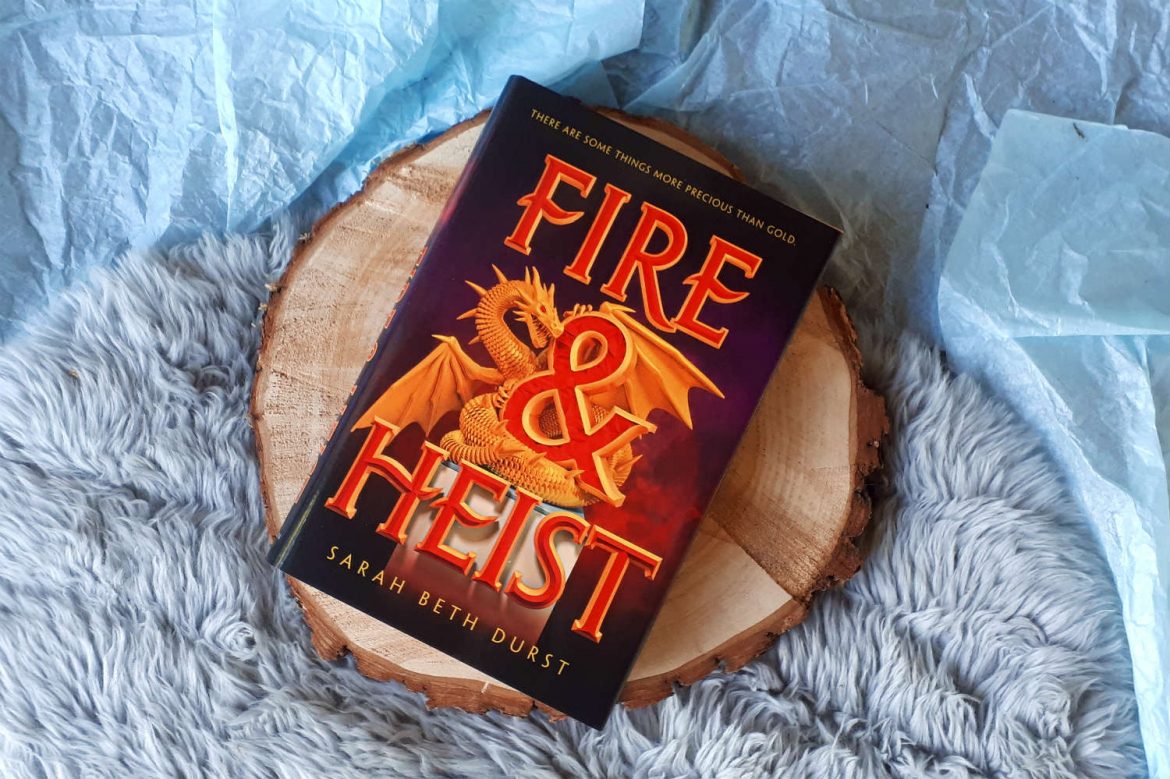 You know what I love? Dragons. And heists. So you can imagine my excitement about Fire & Heist, a book that promised us were-dragons performing heists. But did Sarah Beth Durst deliver an exciting story, or did it fizzle out?

Sky is a wyvern, a human who can turn into a dragon (theoretically, more on this later). In the wyvern community, leading your first heist is an important milestone. And for Sky, this is even more so. Because her mother has gone missing recently, and family has fallen in their wyvern community’s standings. When she discovers secrets about her mother, about the reason her boyfriend broke up with her, and about a precious jewel that could restore her family’s reputation, she gathers her crew and embarks on her heist.

So Fire & Heist wasn’t objectively bad or anything. But it just wasn’t for me. First of all, it’s a contemporary setting in America, with wyverns living in mansions. And I’m not a big fan of these contemporary settings, authors often feel the need to put in some pop culture references that feel forced. And I didn’t know it would be contemporary, so I wasn’t prepared.

Furthermore, the synopsis describes wyverns as “humans capable of turning into dragons”. You can imagine my disappointment when the story itself mentions early on that wyverns have lost this ability long ago. Here I was, expecting some epic heist in which the characters had to transform into wyverns to pull it off. Alas.

Speaking of the “heist” part of the title… There wasn’t a whole lot of heisting going on. About halfway through the book, they embark on their big heist and it all goes pretty smoothly. Now, when I think of heists, I want meticulous plans that then fall apart, improvisation and narrow escapes. Not something that is over within a few pages.

After that heist, the story suddenly took a completely different turn. I won’t go into detail because spoilers, but it was totally different. And I loved it, once I got over the shock of this sudden change. Unfortunately, it didn’t feel satisfying. And that’s something that was lacking with this book as a whole. It seemed underdeveloped, while there was so much potential to expand on the world, the lore, the characters and their relationships.

It also reads quite young. Which is not a problem and I’m not docking points for it. But I do think this would be more suited for 12-year-olds than 18-year-olds. Again, this isn’t criticism, I just want to mention this, so you’re aware when picking it up.

Fire & Heist is a standalone of only 290 pages, and that is the main problem, I think. It would have been possibly to split this book into a duology: have the first book focus on Sky’s life and the world in general, then do the heist and make it a 20+ page finale for that first book. Have it end on that one cliffhanger I’m not going to spoil here, and then have the second book start off from there, with this new situation Sky finds herself in. This way, you have enough time and pages to create a rich and fully-developed world, while still having two exciting storylines/finales.

All things considered, I give Fire & Heist 3 stars out of 5. It sounded amazing, but the contemporary setting isn’t for me. And while the concept has a lot of potential, it wasn’t well developed here. But I’m sure younger readers will enjoy it!

Fans of Cassandra Clare and Julie Kagawa will devour this contemporary fantasy about a teen were-dragon who must steal her first treasure. But a dark discovery during her heist could put her family in incredible danger. In Sky Hawkins's family, leading your first heist is a major milestone--even more so than learning to talk, walk, or do long division. It's a chance to gain power and acceptance within your family, and within society. But stealing your first treasure can be complicated, especially when you're a wyvern--a human capable of turning into a dragon. Embarking on a life of crime is never easy, and Sky discovers secrets about her mother, who recently went missing, the real reason her boyfriend broke up with her, and a valuable jewel that could restore her family's wealth and rank in their community. With a handpicked crew by her side, Sky knows she has everything she needs to complete her first heist, and get her boyfriend and mother back in the process. But then she uncovers a dark truth about were-dragon society--a truth more valuable and dangerous than gold or jewels could ever be.