Traversing Chapters > Reviews > For a Muse of Fire – Review

For a Muse of Fire – Review 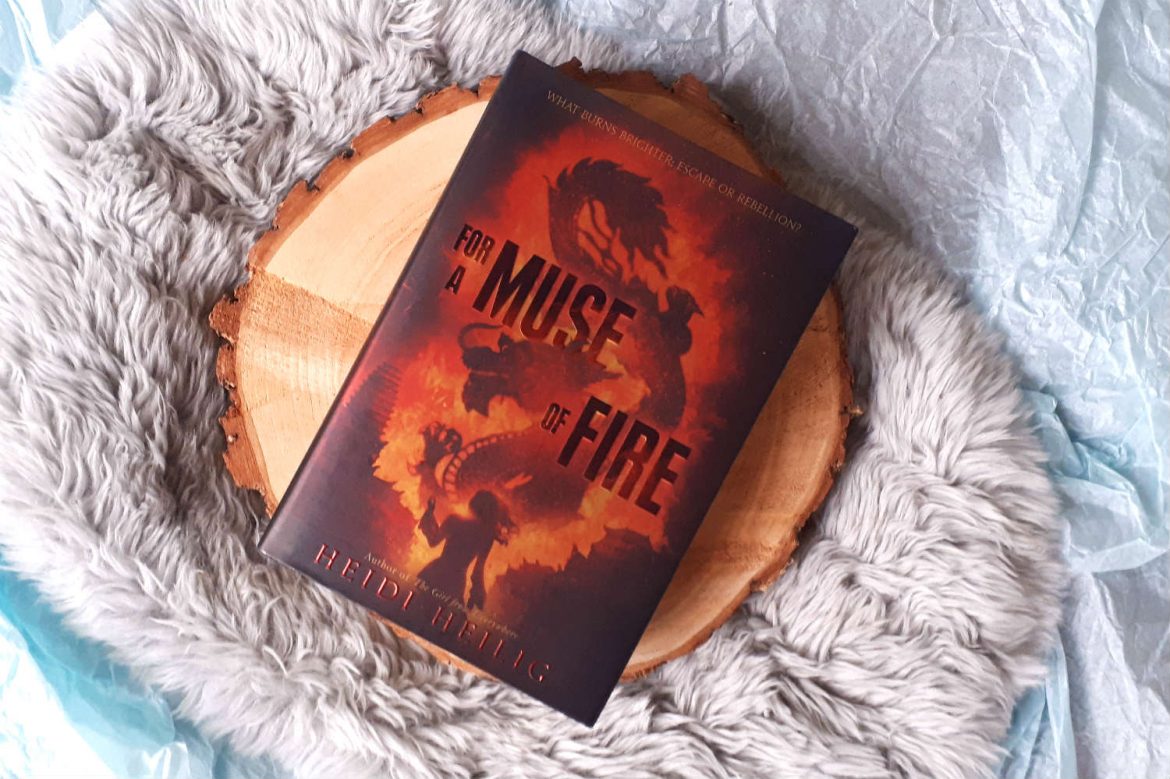 Hi everyone! How was your weekend? We put up our Christmas tree and suddenly I’m totally ready for the holidays! That also means the end of the year is fast approaching and I need to hurry up with my reading challenge or I won’t make it to 45 books this year. One of the books I recently finished was For a Muse of Fire, by Heidi Heilig. Here’s my review!

Jetta’s family is famed as the most talented troupe of shadow players in the land. Their puppets seems to move without strings. In reality, Jetta can see the souls of the dead and bind them in objects (like her puppets). But this old magic has been forbidden ever since the colonial army conquered their country. The family tries to use their reputation to earn a spot aboard the royal ship to Aquitan, where the Mad King reportedly has a spring that cures all ails, something Jetta desperately wants. But rebellion is brewing and then Jetta meets a young smuggler, making her face decisions she never imagined.

There was so much I loved about this book! It has a bipolar main character, and I’m so here for more mental illness rep, especially in YA fantasy! And not just with side characters. Oh no. Give me protagonists who struggle with their mental health (like Thia in The Storm Crow)! Furthermore, Jetta is also queer, although that’s only mentioned briefly.

Not only does this book deal with mental illness, it also focuses on colonialism and its effects on the population. Not just the way the population acts towards the colonizers, but also internally. You have rebels, but also people who enlist in the colonial army. Which creates tensions among the population. And then there is a biracial character, who doesn’t seem to belong in either group. This was all fascinating to read. In school, we learned about our country’s colonial history, but that was not exactly elaborate and focused mainly on the colonizers, not the people whose country was colonized. And while a work of fiction does not replace actual history books, it’s great to get the other side of the story as well.

But of course it’s a fantasy novel, so there’s magic. And not just any kind of magic. We’re talking necromancy here! Jetta, the protagonist, can bind souls to objects and command them. I loved this! It might sound very dark and at times it is, but the magic is also a source of lightness throughout the story. It was fun to imagine these moving puppets. And there is one soul in particular that stole my heart with its adorableness.

However, the story itself was a bit formulaic. The love interest, the rebellion, the main character starting out with a positive opinion about the colonizers, some of the plot twists/revelations,… It’s all been done dozens of times before. Now don’t get me wrong. It wasn’t done badly here, not at all! I didn’t get bored or annoyed. But it was all a bit predictable, to be honest.

But this was countered with the format of the book. For a Muse of Fire is mainly told from Jetta’s first-person point-of-view. This is mixed with screenplays, sheet music, and letters that give us a glimpse of what happens in other locations. These alternative ways of storytelling are more limited than in Illuminae, but it was fun to have things switched up.

So let’s sum things up. While the story in For a Muse of Fire is a bit formulaic, this was compensated with a great main character and mental illness representation. The themes in this book lift the story a few steps higher and kept me glued to the pages. All in all, this book gets 4 stars from me and I’m definitely adding the sequel, A Kingdom for a Stage (published in October of this year), to my TBR list!

A young woman with a dangerous power she barely understands. A smuggler with secrets of his own. A country torn between a merciless colonial army, a terrifying tyrant, and a feared rebel leader. The first book in a new trilogy from the acclaimed Heidi Heilig blends traditional storytelling with ephemera for a lush, page-turning tale of escape and rebellion. For a Muse of Fire will captivate fans of Sabaa Tahir, Leigh Bardugo, and Renée Ahdieh. Jetta’s family is famed as the most talented troupe of shadow players in the land. With Jetta behind the scrim, their puppets seem to move without string or stick—a trade secret, they say. In truth, Jetta can see the souls of the recently departed and bind them to the puppets with her blood. But ever since the colonizing army conquered their country, the old ways are forbidden, so Jetta must never show, never tell. Her skill and fame are her family’s way to earn a spot aboard the royal ship to Aquitan, where shadow plays are the latest rage, and where rumor has it the Mad Emperor has a spring that cures his ills—and could cure Jetta’s, too. Because seeing spirits is not the only thing that plagues her. But as rebellion seethes and as Jetta meets a young smuggler, she will face truths and decisions that she never imagined—and safety will never seem so far away. Heidi Heilig creates a vivid, rich world inspired by Asian cultures and French colonialism. Her characters are equally complex and nuanced, including the bipolar heroine. Told from Jetta’s first-person point-of-view, as well as with chapters written as play scripts and ephemera such as telegrams and letters, For a Muse of Fire is an engrossing journey that weaves magic, simmering romance, and the deep bonds of family with the high stakes of epic adventure.