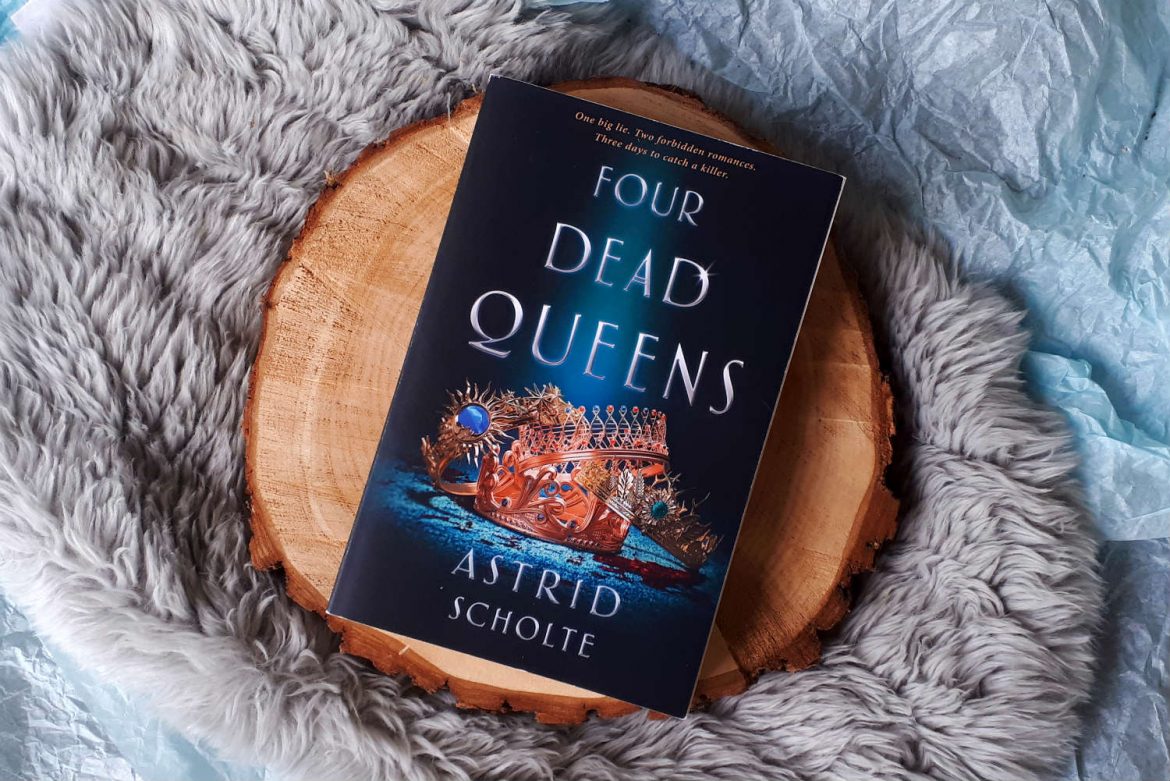 Hello everyone! With all those unboxings and Game of Thrones posts the last couple of weeks, it’s been a while since I posted a proper book review. But here I am again, with a review of Astrid Scholte’s Four Dead Queens!

Keralie lives in the country of Kedara, which is divided into four regions, each ruled by one of the four queens. But while Keralie seems harmless, she is one of the country’s most skilled thieves. One day, she steals a package from a messenger. When this messenger, Varin, tries to retrieve the package, he and Keralie find themselves entangled in a conspiracy that leaves all four queens dead. On the run from Keralie’s former employer, they decide to join forces to uncover the secrets behind these murders.

I love me some good murder mystery, so I was incredibly excited about Four Dead Queens. And let’s not forget this gorgeous cover as well! I absolutely love it! And it was a fun read indeed. I flew through it and enjoyed myself a lot.

The way this book is structured is also very clever. I can’t go into much detail here, because it would spoil the fun for you. But let’s just say there will be a few moments where you go “ooooh”. Kudos to Astrid Scholte for that, because it was unexpected and well done.

The idea of this country divided into four regions, each ruled by a queen, was also a fun concept. However, I wanted to see more of this country and learn more about its history. For instance, there is mention of a king many years ago, who ruled the entire country. But then the queens took over. Why was this the best solution, to carve up Quadara? And why aren’t the queens allowed to leave the palace and visit the region they rule? Wouldn’t it be better if they got to see the realm?

My biggest issue with Four Dead Queens is that I wanted more. The book is only about 400 pages long and it is a standalone. So in those 400 pages we meet the protagonists, the four queens, the country with its four regions and queenly law, we see a romance develop and we witness how the main characters solve this murder mystery.

All of that in one book? That’s just too much, if you ask me.

As I said earlier, the story would have benefited from more world building. And it would have given the author the chance to work more slowly towards the resolution of the mystery. As it is now, we get handed a piece of information about one third of the way in. And it’s not subtle, it might have well been broadcasted on a neon sign. If you have read murder mysteries before, this information will immediately make all the alarm bells in your mind ring.

Furthermore, the romance wasn’t really necessary in my eyes. Because there was so much going on in this story, we barely had time to properly get to know Varin. Keralie had her own POV chapters, so we did get some insight into her history and personality. But Varin remained a bit of an enigma. That also made it hard to see why Keralie fell for him so quickly. There just wasn’t a lot of chemistry between them…

Four Dead Queens is Astrid Scholte’s debut and it is definitely a promising start to her writing career. The story is fun and the concept was original and clever. But I would have liked more world building, more character development, and well… just *more*.

Seventeen-year-old Keralie Corrington may seem harmless, but she's, in fact, one of Quadara's most skilled thieves and a liar. Varin, on the other hand, is an honest, upstanding citizen of Quadara's most enlightened region, Eonia. He runs afoul of Keralie when she steals a package from him, putting his life in danger. When Varin attempts to retrieve the package, he and Keralie both find themselves entangled in a conspiracy that leaves all four of Quadara's queens dead.

With no other choices and on the run from Keralie's former employer, the two decide to join forces, endeavoring to discover who has killed the queens and save their own lives in the process. When their reluctant partnership blooms into a tenuous romance, they must overcome their own dark secrets in hopes of a future together that seemed impossible just days before. But first they have to stay alive and untangle the secrets behind the nation's four dead queens.

An enthralling fast-paced murder mystery where competing agendas collide with deadly consequences, Four Dead Queensheralds the arrival of an exciting new YA talent.