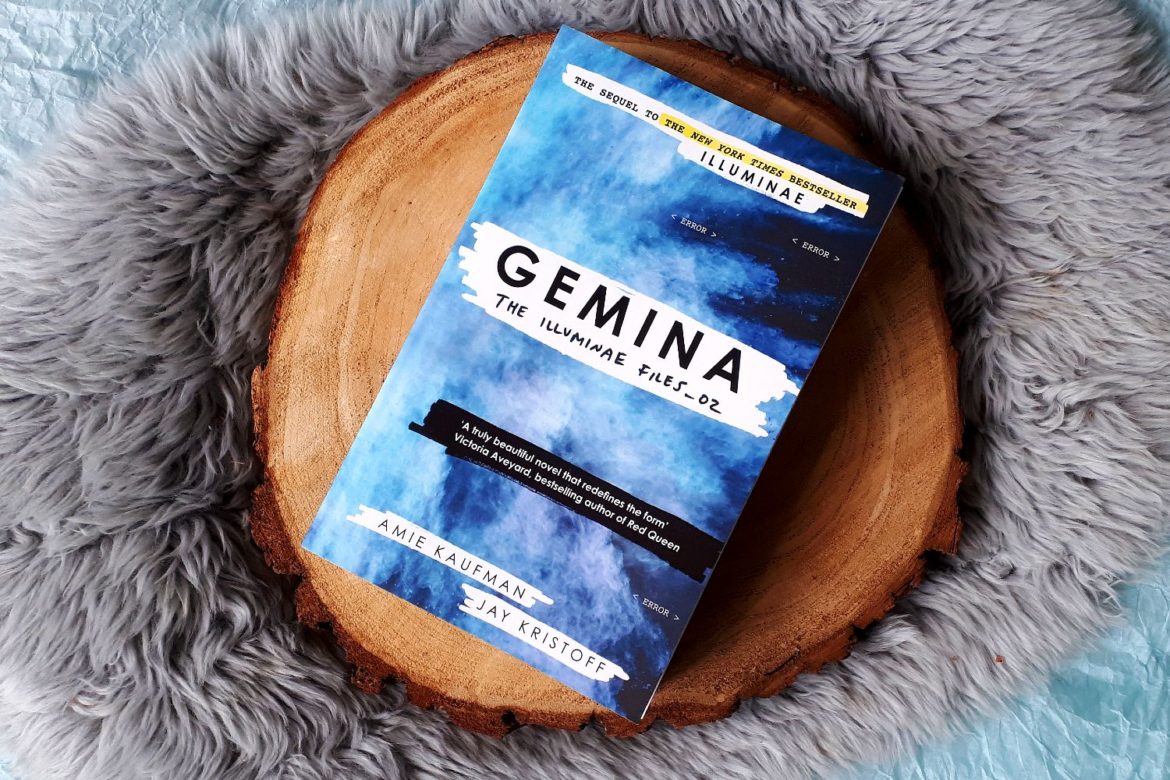 Hi everyone! As you might have read in my previous post in which I looked back on the books I read since the start of 2020, I absolutely loved Gemina by Amie Kaufman and Jay Kristoff. So without further ado, let’s jump straight to my review of this science-fiction novel!

Warning: I won’t spoil any of the events in Gemina in this review. But since it’s the sequel to Illuminae, this post contains some (very mild) spoilers for that book.

Hanna is the pampered daughter of jump station Heimdall’s station captain. Nik is the reluctant member of a notorious crime family. While they are struggling with their everyday lives aboard a space station, Kady Grant and the Hypatia are headed their way with news of the Kerenza invasion. When an elite BeiTech strike team invades the Heimdall, it’s up to Hanna and Nik to defend their home. Oh, and there are alien predators roaming the station’s hallways, and a malfunction in the station’s wormhole threatens the entire space-time continuum.

Gemina is the sequel to Illuminae, which was one of my favourite reads of last year. Like that first book in the series, this one is told not in the traditional style with a narrator describing events. Oh no, we get a stack of documents, chat logs, diary excerpts, transcripts of security footage, and so on.

This makes Gemina a very fast-paced read. Yes, the book is over 600 pages long, but it reads like a high-speed train. I did feel like there were more transcripts of security footage compared to the first book though. These pieces of information are similar to having a traditional narrator, but with a very distinctive voice.

And there was so much going on! A hostile take-over by a lethal squad, an infestation of creepy-crawlies, a wormhole, and the impending arrival of a fleet of drones to blow everything to smithereens. Poor Hanna, Nik and Ella don’t get five minutes to catch their breath.

Speaking of these main characters… I really liked them! Hanna and Nik were so fun together, despite how different they (and their lives) were. Although I should mention here that Hanna reminded me so much of Kady (the protagonist in Illuminae) that I kept calling her Kady in my mind. And Ella! She is not as central as the other two, but I adored her so much! There was one point where she kept messing with Nik’s username in a chat and it absolutely cracked me up!

In fact, there were several moments where I laughed out loud. Witty remarks, easter eggs, this book has it all. I do wonder how that Lollipop song sounds! And did I mention there were moments where I got a serious Home Alone vibe from Hanna versus the BeiTech squad?

But it’s not all fun and games. People die. Many people. In gruesome ways. And the lanima worms/parasites/ickies were absolutely disgusting. There was one page where the movement of the creature isn’t just described. It’s also accentuated by the wavy writing, creating the feeling of something slithering around. YUCK YUCK YUCK!

All in all, Gemina is a great book. Is it story-wise the best book ever? No, I’ll be honest with you. But with this book, with its formatting, its humour, its easter eggs, that simply didn’t bother me for one moment. And am I going to read Obsidio, the final book of the trilogy? You bet! It’s waiting for me on my shelves right now!

Moving to a space station at the edge of the galaxy was always going to be the death of Hanna’s social life. Nobody said it might actually get her killed. The sci-fi saga that began with the breakout bestseller Illuminae continues on board the Jump Station Heimdall, where two new characters will confront the next wave of the BeiTech assault.

Hanna is the station captain’s pampered daughter; Nik the reluctant member of a notorious crime family. But while the pair are struggling with the realities of life aboard the galaxy's most boring space station, little do they know that Kady Grant and the Hypatia are headed right toward Heimdall, carrying news of the Kerenza invasion. When an elite BeiTech strike team invades the station, Hanna and Nik are thrown together to defend their home. But alien predators are picking off the station residents one by one, and a malfunction in the station's wormhole means the space-time continuum might be ripped in two before dinner. Soon Hanna and Nik aren’t just fighting for their own survival; the fate of everyone on the Hypatia—and possibly the known universe—is in their hands. But relax. They've totally got this. They hope.

Once again told through a compelling dossier of emails, IMs, classified files, transcripts, and schematics, Gemina raises the stakes of the Illuminae Files, hurling readers into an enthralling new story that will leave them breathless.