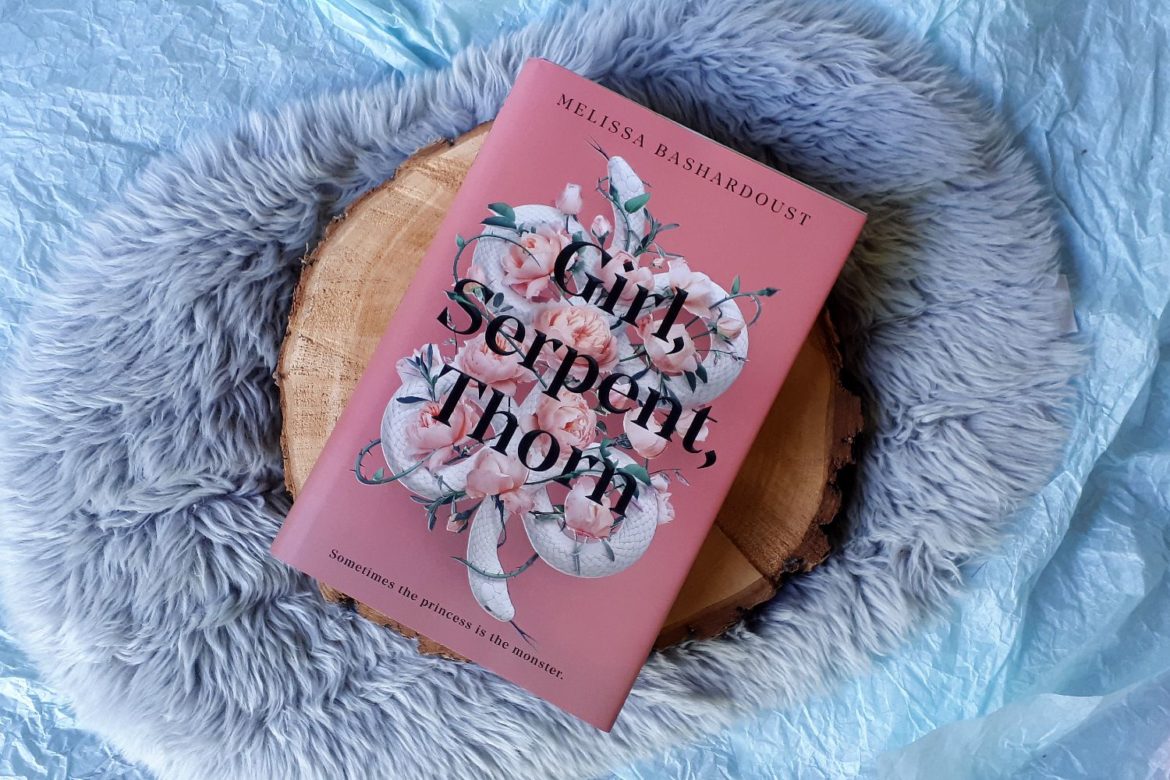 Hi everyone! How are you all doing? I’m happy that the heatwave is over here and I can actually do stuff again! So I have to catch up on some household chores that I put off last week. Yay… Anyway, let’s talk about more fun things. Like books. Today’s review is all about Girl, Serpent, Thorn by Melissa Bashardoust!

Soraya is a princess, but has to spend her life hidden away, apart from her family. She is poisonous to the touch and is safe only in her gardens. While her twin brother’s wedding approaches, Soraya learns that there is a demon in the dungeons below, one who holds the knowledge she needs, the answer to her freedom. And above is a  young man who isn’t afraid of her, who sees who she is underneath the poison. When Soraya’s choices lead to consequences she never imagined, she begins to question who she is, and who she is becoming: human or demon?

Girl, Serpent, Thorn incorporates fairy tale elements and combines them with Persian mythology. This creates a world that is rich in creatures and dangers. While the scale of the story is limited to Soraya’s immediate surroundings (so no big battles or multiple POVs), I still felt like I knew everything I needed to understand this world.

The pacing is well-balanced, and there were plenty of twists and turns along the way. Some of those were a bit predictable, but that might also just be because the author gave us just the right amount of breadcrumbs to make our own guesses.

But where this book truly shines, is the characters. They were all so morally grey and I loved it! The three most important characters were all deeply flawed, which made them feel fleshed out. There’s the main character, who is one of my favourite antiheroines of all time. Her loneliness and desire to be *seen* leads her to make decisions that have disastrous consequences, while she is worried about what all these things say about her as a person.

The villain acts as a mirror to Soraya, there are many parallels to their stories – which they themselves also realize, which adds to Soraya’s doubts. I was actually really intrigued by this villain, but of course I can’t say more due to spoilers. The love interest was also a fascinating character, albeit slightly less developed than the other two.

I have to admit I didn’t really feel the romance that unfolded though. It didn’t have the slow build-up and rewarding pay-off that I love. Instead, it was a bit too insta-love-y. And yes, I know that’s how romantic feelings work in real life too, but due to the nature of this romance and the problems these characters found themselves in, it felt like it was a bit too sudden.

I do feel like Girl, Serpent, Thorn could have been a duology. Now we got a big twist/revelation right around the halfway point of this 320-page book. That would have been a perfect cliffhanger to leave us all craving the rest of the story. That would give us time to delve even deeper into the characters’ feelings and motivations (hi, slower build-up to the romance!).

But on the other hand, I’m well aware that would mean you’d need to add more scenes to create two complete books. And that might affect the pacing, which – like I said earlier – was very balanced here. So I also understand the decision to keep it a standalone. I just enjoyed it so much that I want more, I guess!

Girl, Serpent, Thorn is “an alluring feminist fairy tale” (Kirkus Reviews) about a girl cursed to be poisonous to the touch and who discovers what power might lie in such a curse. There was and there was not, as all stories begin, a princess cursed to be poisonous to the touch. But for Soraya, who has lived her life hidden away, apart from her family, safe only in her gardens, it’s not just a story. As the day of her twin brother’s wedding approaches, Soraya must decide if she’s willing to step outside of the shadows for the first time. Below in the dungeon is a demon who holds knowledge that she craves, the answer to her freedom. And above is a young man who isn’t afraid of her, whose eyes linger not with fear, but with an understanding of who she is beneath the poison. Soraya thought she knew her place in the world, but when her choices lead to consequences she never imagined, she begins to question who she is and who she is becoming...human or demon. Princess or monster.