Heart of Thorns – Not enough barbs 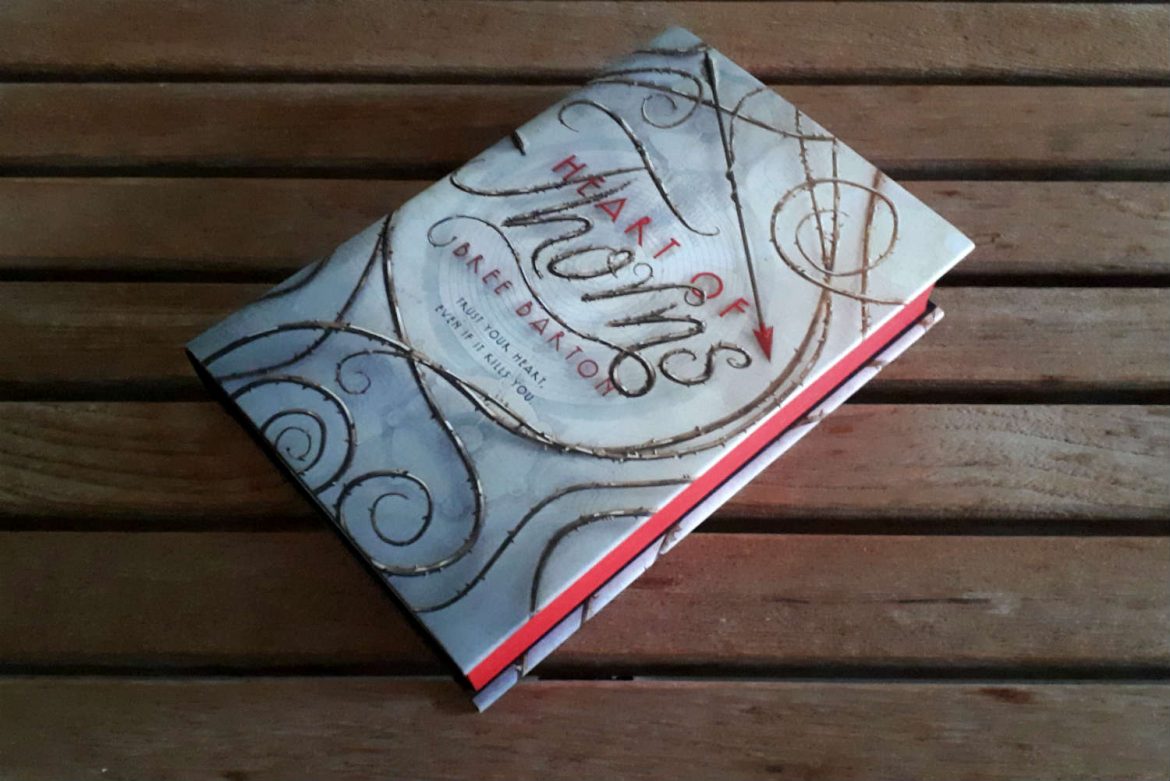 Last month’s Fairyloot theme was “the power within” and the featured book of the month was Heart of Thorns. It’s a story about a world where women are feared. Why? Because they might have magic that can kill with a single touch. As promised last week in my unboxing, I read the book and put my thoughts on paper (or well, on a screen, I guess?). Here’s what I thought of Heart of Thorns!

Seventeen-year-old Mia has sworn to hunt Gwyrach, women who can manipulate flesh, blood, bone and breath. For one of those feared women-demons is responsible for killing Mia’s mother. But her life takes a different turn when her father announces she is to marry Quin, the prince of the river kingdom. As if that isn’t bad enough yet, Mia discovers she herself has the very magic she has vowed to destroy.

I loved the premise of this story! The magic sounds intriguing, both the way it works and – as we learn later on in the book – how it first developed and why only women have this kind of magic. This story is strongly rooted in feminism. One example is Mia’s discontent about the fact that Quin has an older (and more competent) sister, who is excluded from the line of succession simply because she’s a woman.

However, my overall feeling while reading and after finishing this book was “meh”… Maybe that’s partly because the previous book I read was also about a society where women are oppressed and this one just can’t match Grace and Fury in terms of writing and story development.

The writing is decent, but nothing special. And the story for the first 75 percent of the book falls flat. It’s all so very careful and risk-free. I want more barbs and sharp edges in my books. Barton uses a lot of tropes, and while tropes aren’t necessarily bad, it feels like we’re working through a checklist of all the YA clichés.

It doesn’t help that the main character didn’t really appeal to me. I kept shaking my head at her actions and thoughts. Prince Quin on the other hand was a kind guy. He was even just a bit too perfect for me, there was no edge or hook about him.

Furthermore, the pacing of the story is so strange. It feels like the story spans at least a few weeks, but it all happens in a span of barely a handful of days. At one point, there’s a chapter with a sort of magic training sequence, separated by scene breaks. This creates the feeling that we’re witnessing at least a few days in fast-forward, while in fact it’s still the same day.

You might get the impression I didn’t enjoy Heart of Thorns, but that’s not true. The story is enjoyable, it just doesn’t stand out from other YA fantasy novels. Until we got to the finale, that is. Like I said, the first 75 percent were a bit “meh” for me, but the final chapters put everything upside down. We got one plot twist after the other. Some were a bit predictable, others I did not see coming.

Heart of Thorns is Bree Barton’s debut and it felt like we witnessed her grow as an author. The book started very careful and the pacing was off, but the ending made up for so much. So I’m willing to cut her some slack. And I already put the sequel (expected publication: 2019) on my TBR list.

Inventive and heart-racing, this fierce feminist teen fantasy from debut author Bree Barton explores a dark kingdom in which only women can possess magic—and every woman is suspected of having it. Fans of Leigh Bardugo and Laini Taylor won’t want to miss this gorgeously written, bold novel, the first in the Heart of Thorns trilogy. In the ancient river kingdom, where touch is a battlefield and bodies the instruments of war, Mia Rose has pledged her life to hunting Gwyrach: women who can manipulate flesh, bones, breath, and blood. The same women who killed her mother without a single scratch. But when Mia's father announces an alliance with the royal family, she is forced to trade in her knives and trousers for a sumptuous silk gown. Determined to forge her own path forward, Mia plots a daring escape, but could never predict the greatest betrayal of all: her own body. Mia possesses the very magic she has sworn to destroy. Now, as she untangles the secrets of her past, Mia must learn to trust her heart…even if it kills her.