How Mandatory Reading Lists Killed My Love For Reading 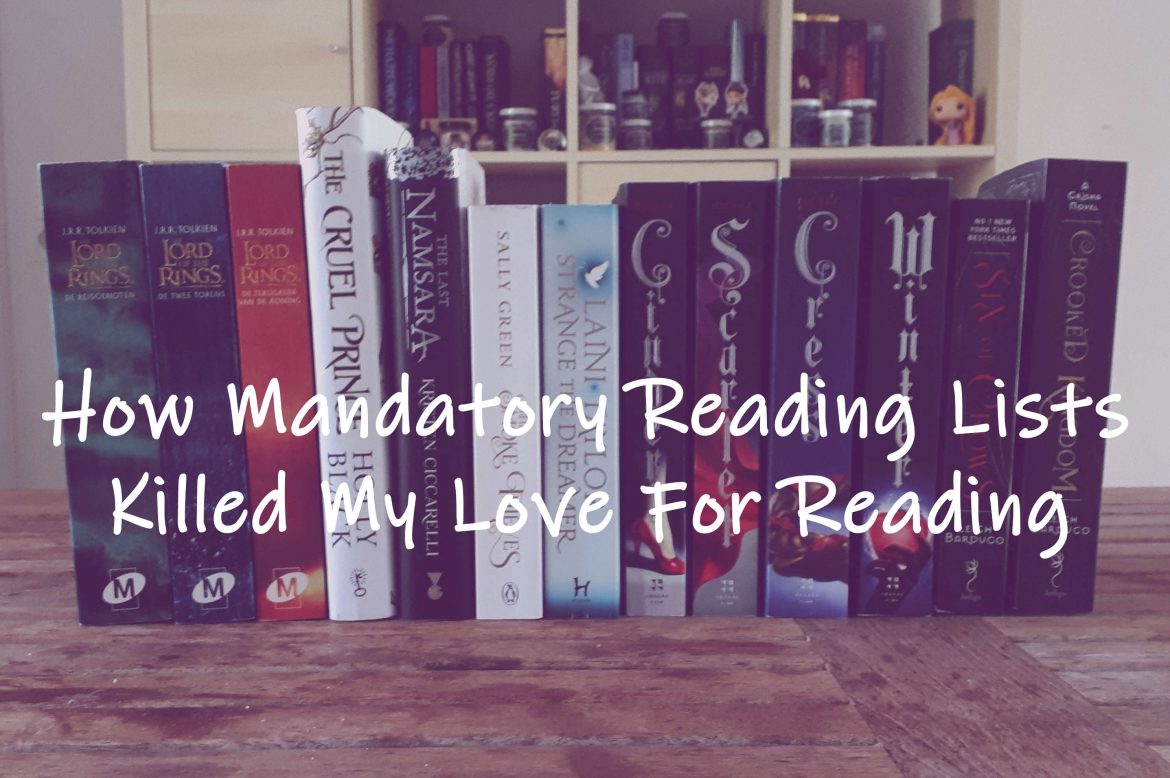 Summer holidays are almost over here in Belgium and students are getting ready to go back to school. That means they will be bombarded by lists of school supplies to buy, and lists of books they will have to read. And that’s what I want to talk about today, mandatory reading lists.

First of all, let me start by telling you a bit of my history as a reader. My parents have always encouraged me to read books. They would read to me every night before bedtime and I taught myself how to read by the age of 5. Then my parents started taking me to the library every 3 or 4 weeks, and I would come home with a huge stack of new books. For a few years, I read everything: books, comics, newspapers, even labels on shampoo bottles.

But then, mandatory reading lists happened. By that time, I had developed a love for fantasy stories, filled with epic quests, magic and monstrous creatures. Unfortunately, these mandatory reading lists did not include anything like that. Instead we got a list with 40 classics in Dutch/Flemish literature, most of them set (and written) at least 30 years before I was born. Book after book about life in rural Belgium during World War II, or about some simple office clerk who gets involved in dodgy schemes…

I know these lists are meant to encourage students to read and to introduce them to the classics. But what did they really achieve? The students who hated reading never touched these books. They looked up summaries, watched the movie adaptation, or even copied entire book reviews from the internet. And the students who enjoyed reading? I can’t speak for everyone, but my own love for books died a little bit more with every page I had to read.

Those books just weren’t fun. I’m not saying they were objectively terrible of course, but it just wasn’t what I enjoyed reading. No powerful wizards, adventures spanning an entire continent, or battles between good and evil. Reading became a chore for me, all the pleasure I used to have, was gone.

Luckily, in our final year of secondary school, our teacher seemed to be aware of this issue. He handed out a reading list, but we were allowed to pick other books. He still had to approve those, but I got to read The Da Vinci Code for an assignment. Finally a book I enjoyed again!

I am well aware it’s a tricky balance for teachers. They have to encourage students to read, but they also have to familiarise these students with books that are considered “the classics”. And pastoral novels from the first half of last century don’t exactly appeal to teens. So following the example of that one teacher sounds like a good idea: give students a list, pick a few of these books to discuss in class, but give them the liberty to explore other books as well.

As you might have figured out, my love for reading was rekindled eventually. After I finished secondary school, I barely read for two years, but then I picked up The Mists of Avalon by Marion Zimmer Bradley. A huge tome telling the Arthurian legends from the perspective of Morgaine/Morgan le Fay? This was what I had been looking for! And I haven’t stopped reading books ever since!