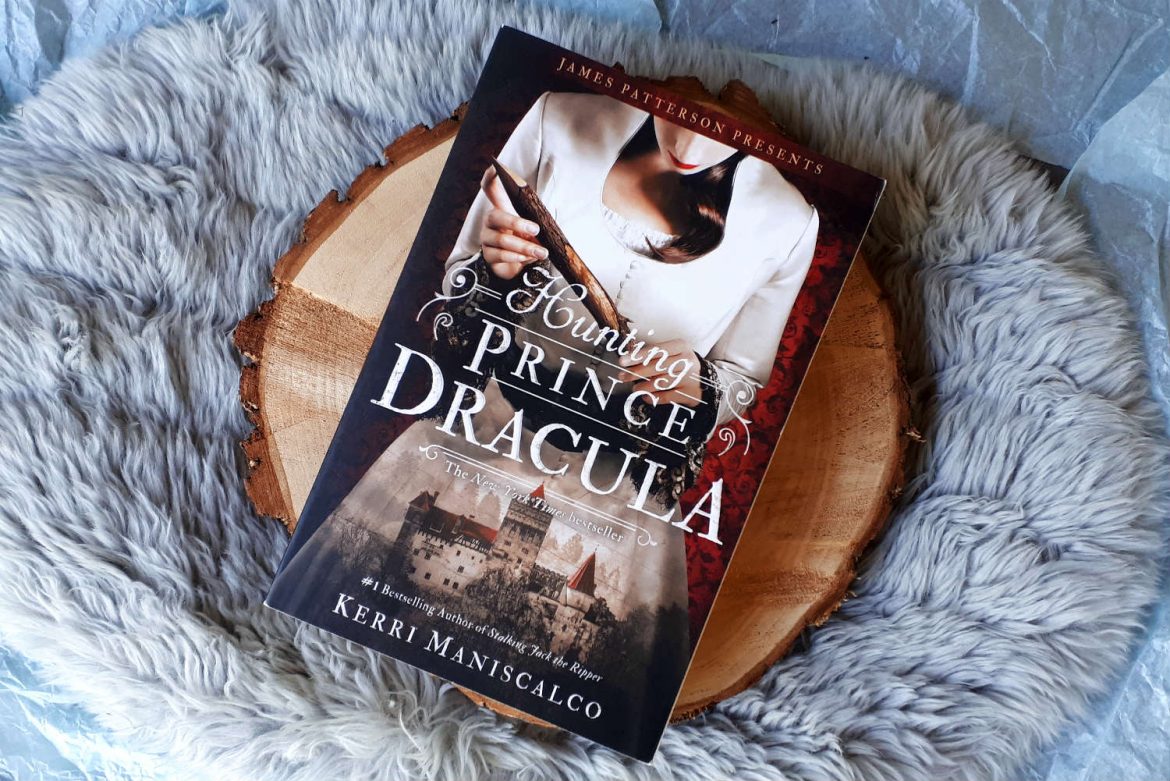 No fantasy novel this week, but a murder mystery set in the late 19th century. In Hunting Prince Dracula, we travel to Romania where rumours swirl that Vlad the Impaler has risen from the dead. Sounds gruesome, right? But is it entertaining?

After the events and painful revelation in Stalking Jack the Ripper, we meet up with Audrey Rose and Thomas on a train to Romania. There, they will take a course in forensic medicine. And not in some boring school. No, this course takes place in Bran Castle, home to Vlad the Impaler. But what should have been an escape from the horrors of the Jack the Ripper case, soon turns into a nightmare when people are murdered. Has Dracula risen again, or is there a sinister imposter on the loose?

I was actually a bit scared of reading Hunting Prince Dracula. I knew from the first book in the series, Stalking Jack the Ripper, that this series can get pretty gruesome. Which in itself isn’t a big problem for me. But the atmosphere of Bran Castle and the whole idea of “has Dracula risen from the dead?”, that sounds like something that might give me nightmares. I mean, I have been known to be startled by my own shadow.

But it actually wasn’t all that scary. The first few chapters, when Audrey Rose first explores the castle and the first dead body shows up, are the scariest. However, later on the story gets more and more gruesome. Yes, there are more murders and there is more blood, but weirdly I don’t mind those as much. I’m probably just very strange, I guess.

The story is told from Audrey Rose’s perspective and she’s such a great character. She’s quite the feminist and while being pretty progressive, she is also clearly a child of her time and worried about impropriety. I love that she is so passionate about forensic medicine, but still loves beautiful dresses. All too often, these outspoken female characters are portrayed as rejecting things like make-up and fashion. And I’m so sick of that stereotype. So yay for Audrey Rose!

The other shining star of the story is of course Thomas Cresswell. He has quickly become one of the YA community’s favourite book boyfriends and it’s not hard to see why. He’s funny, handsome, clever, a supportive friend to Audrey Rose and a shameless flirt. I loved seeing the relationship between these characters grow, from not being able to stand each other when they first met, to this amazing detective duo.

Speaking of detectives… Me! While I almost immediately figured out the killer in Stalking Jack the Ripper, it took me a bit longer with this case. There were several suspicious characters and they all took turns on the top of my list. I did settle on the actual killer eventually, but I admit I had no idea about the motive. And wow, that was… something. Kerri Maniscalco knows how to shock people with her reveals!

However, Hunting Prince Dracula didn’t blow me away. It felt a bit slow at times. Not that it was boring, but it didn’t feel like the plot was progressing. At the same time, I was left with questions about some of the characters. Which was weird, because some of that filler stuff could have been replaced with more answers about these characters?

So all in all, Hunting Prince Dracula was a delightfully morbid story and a fitting sequel to Stalking Jack the Ripper. I enjoyed the mystery and the characters, despite it feeling a bit slow. My final verdict therefore is 4 stars out of 5, and I can’t wait to get my hands on the third book in the series, Escaping from Houdini. (Curse you, self-imposed book-buying ban!)

In this hotly anticipated sequel to the haunting #1 bestseller Stalking Jack the Ripper, bizarre murders are discovered in the castle of Prince Vlad the Impaler, otherwise known as Dracula. Could it be a copycat killer...or has the depraved prince been brought back to life? Following the grief and horror of her discovery of Jack the Ripper's true identity, Audrey Rose Wadsworth has no choice but to flee London and its memories. Together with the arrogant yet charming Thomas Cresswell, she journeys to the dark heart of Romania, home to one of Europe's best schools of forensic medicine...and to another notorious killer, Vlad the Impaler, whose thirst for blood became legend. But her life's dream is soon tainted by blood-soaked discoveries in the halls of the school's forbidding castle, and Audrey Rose is compelled to investigate the strangely familiar murders. What she finds brings all her terrifying fears to life once again.