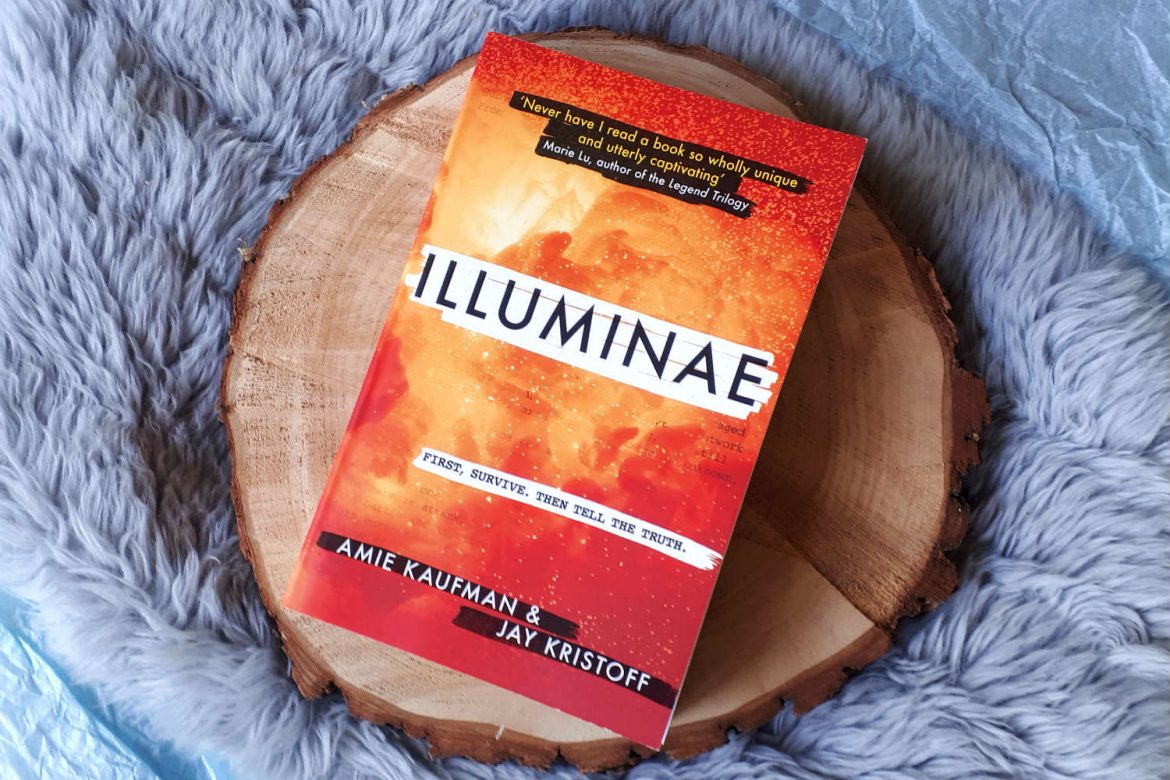 You might know I’ve said before I’m not a big fan of science fiction. But Illuminae is such a unique book and I’ve heard nothing but good things about it. Add to that the fact that it is written by Jay Kristoff, together with Amie Kaufman, and you’ll understand why I just *had* to read this one!

Kady has just broken up with her boyfriend Ezra. You would think this day couldn’t get any worse, right? But then the remote planet they live on is invaded by a rival megacorporation. They manage to fight their way onto an evacuating fleet, but their problems are far from over. In fact, they are just beginning. A deadly plague has broken out and is mutating, with horrifying effects; the fleet’s AI might be their biggest enemy; and they are being chased through space by an enemy warship.

I had heard so many great things about this series, but since I’m not a big fan of science fiction, I wasn’t in a hurry to pick this up. Then again, it’s co-written by Jay Kristoff, whose Nevernight Chronicles are among my favourite series. So I finally got myself a copy of Illuminae and sat down with it.

And wow, it was freaking awesome!

I loved every single page of it! Illuminae isn’t your average novel with a narrator describing actions, interspersed with dialogue. Oh no. This is a dossier of hacked documents, schematics, emails, diary entries, chat logs, and so much more. Every page is a surprise, since you never know beforehand what it will look like.

This book has 600 pages, but it’s such a fast-paced read. I simply flew through it at warp speed. Although that’s not entirely correct. I also took my time to study each page in detail, soaking up every tiny hint and Easter egg. For example: at one point, we are given a list of casualties. And while most names are random, there are also a few authors of YA novels included. There’s also a poster for a kids movie, with the soundtrack created by Slayer. Yes, that’s a metal band and it made me laugh out loud.

I read this book at home, but let me warn you if you do read it outside, on a train or so: there will be times you’ll want to turn the book sideways to study tiny details. So be prepared for funny looks from other people!

A book you experience

Illuminae is of course more than just pretty words and funny Easter eggs. There’s also a story and a set of characters. I love Ezra and Kady so much. She’s a badass and he’s adorable. And AIDAN…! He’s terrifying, but also kind of a tortured poet. I can’t tell you much about him without giving away the plot, but let’s just say my feelings went every direction, often all at the same time! The story itself isn’t earth-shattering, but it is still really entertaining and unpredictable. I honestly had no idea what was going to happen!

It won’t surprise you that I give Illuminae 5 stars out of 5! It was such a fun and unique book and I wanted to take in every single detail of it. This isn’t a book you simply read, it’s book you experience. So even I, a reluctant scifi reader, have put the sequels Gemina and Obsidio near the top of my To Buy list. Now I just have to finish the books I already own, so my book buying ban gets lifted…

For fans of Marie Lu and James Dashner comes the first book in an epic new series. “Never have I read a book so wholly unique and utterly captivating.” —Marie Lu, New York Times bestselling author of the Legend trilogy This morning, Kady thought breaking up with Ezra was the hardest thing she'd have to do. This afternoon, her planet was invaded. The year is 2575, and two rival megacorporations are at war over a planet that's little more than an ice-covered speck at the edge of the universe. Too bad nobody thought to warn the people living on it. With enemy fire raining down on them, Kady and Ezra—who are barely even talking to each other—are forced to fight their way onto one of the evacuating fleet, with an enemy warship in hot pursuit. But their problems are just getting started. A deadly plague has broken out and is mutating, with terrifying results; the fleet's AI, which should be protecting them, may actually be their enemy; and nobody in charge will say what's really going on. As Kady hacks into a tangled web of data to find the truth, it's clear only one person can help her bring it all to light: the ex-boyfriend sheswore she'd never speak to again! Told through a fascinating dossier of hacked documents—including emails, schematics, military files, IMs, medical reports, interviews, and more—Illuminae is the first book in a heart-stopping, high-octane trilogy about lives interrupted, the price of truth, and the courage of everyday heroes.