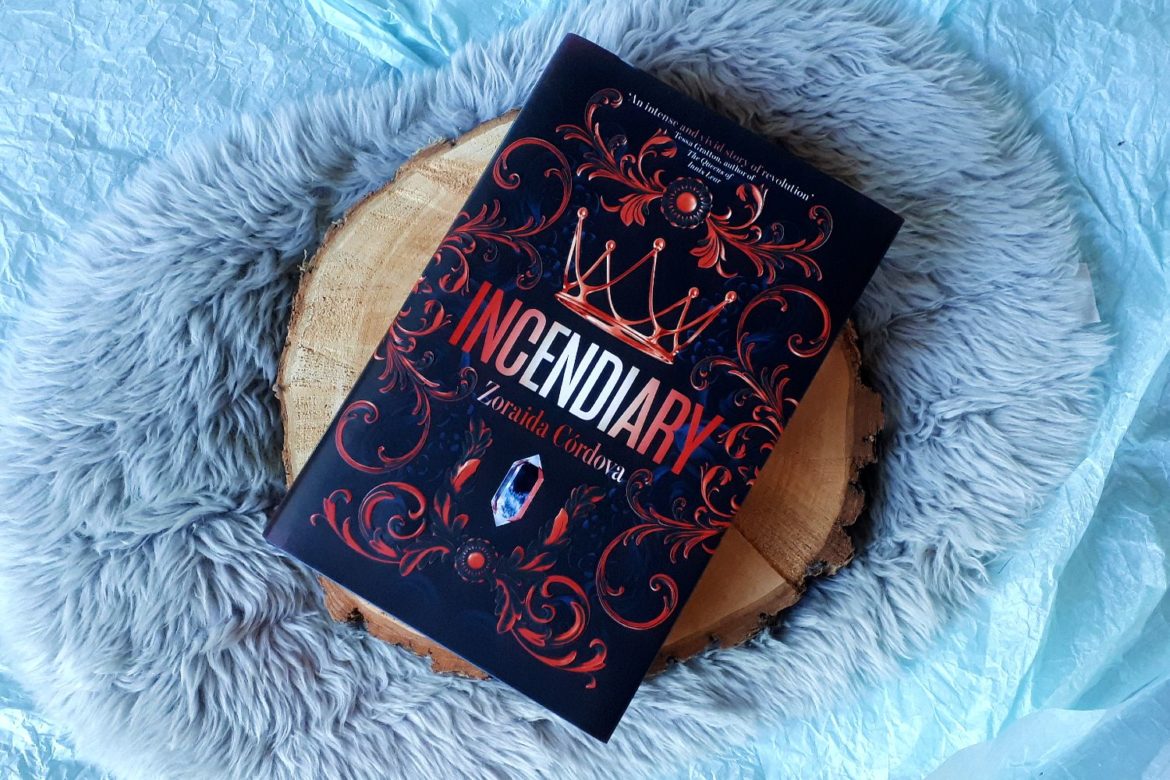 Hi everyone! I hope you’re all safe and healthy! I’m still struggling to focus on reading, despite having some really good books here… Guess it’s a combination of all that’s going on in the world and my usual summer reading slump. It’s so frustrating, to be honest. Anyway, let’s get on with this post. Today’s review is all about Incendiary, by Zoraida Córdova!

Renata Convida was only a child when she was kidnapped by the King’s Justice and brough to the palace. As a Robari, the rarest of the magical Moria, her ability to steal memories from enemies enabled the King’s Wrath, a siege that resulted in the deaths of thousands of her people. Now, she is one of the Whispers, rebel spies working against the crown. The Whispers may have rescued her from the palace years ago, but their mistrust and hatred is still there. When Dez, the commander of her unit, is taken captive by the notorious Sangrado Prince, Renata will do anything to save the boy she loves. Including returning to the palace and pretending that she remains loyal to the crown.

Okay, so who do I have to bribe to get my hands on the sequel right now?!

It took me 12 days to get through this book, but that was absolutely a me-thing. I kept thinking about this book, but I was simply too tired to read.

Anyway, let’s try to put my thoughts together in a coherent review!

I loved the magic so much! This was a really interesting system, with some people (the Moria) having these abilities, but not everyone’s abilities are the same.

And while I sometimes read about magical abilities that I wouldn’t mind having myself, I don’t think I’d want to be a Robari like Renata. Because she can steal memories by touching people, she feels isolated from everyone. Not only does she have to wear gloves all the time, people also fear her and don’t want to come close to her.

Not to mention the burden these stolen memories put on her. As a Robari, she was used by the King’s Justice to “interrogate” enemies, but these memories haunt her to this day. I really liked her and it was interesting to see her grow into herself. Because of all she’s been through, her feelings are very conflicted and they definitely felt realistic and layered.

It’s hard to talk about the other characters without spoiling anything. So let me just say that the rest of the cast are all intriguing as well.

The pacing was a bit weird though. The first 300 pages were rather slow, but then in the final 150 pages the story reached cruising speed, and events and revelations hit you in the face from all sides.

Incendiary also uses a lot of classic YA tropes. Not that tropes are bad, they exist for a reason. But the extensive use of them made this story feel a bit familiar. Like it wasn’t anything new.

It also didn’t help that I figured out one of the two major twists/revelations at about 50 pages in. That definitely took away some of the tension and angst for me. But I’ve become pretty good at predicting twists, so maybe you *will* get blown away by it! Don’t let that stop you from picking up Incendiary, because it’s still a Really Good Book!

And now I’ll go put myself into cryosleep until early summer next year, when the sequel will be published.

Set in a lushly drawn world inspired by Inquisition Spain, Zoraida Córdova's hotly anticipated new fantasy is an epic tale of love and revenge perfect for fans of Sabaa Tahir and Sarah J. Maas. I am Renata Convida.I have lived a hundred stolen lives. Now I live my own. Renata was only a child when she was kidnapped by the King's Justice and brought to the luxurious palace of Andalucia. As a memory thief, the rarest and most feared of the magical Moria, Renata was used by the crown to carry out the King's Wrath, a siege that resulted in the deaths of thousands of her own people. Now Renata is one of the Whispers, rebel spies working against the crown. The Whispers may have rescued Renata years ago, but she cannot escape their mistrust and hatred-or the overpowering memories of the hundreds of souls she drained during her time in the palace. When Dez, the commander of her unit-and the boy she's grown to love-is taken captive by the notorious Principe Dorado, Renata must return to Andalucia and complete Dez's top secret mission herself. Can she keep her cover, even as she burns for vengeance against the brutal, enigmatic prince? Her life and the fate of the Moria depend on it. But returning to the palace stirs childhood memories long locked away. As Renata grows more deeply embedded in the politics of the royal court, she uncovers a secret in her past that could change the fate of the entire kingdom-and end the war that has cost her everything.