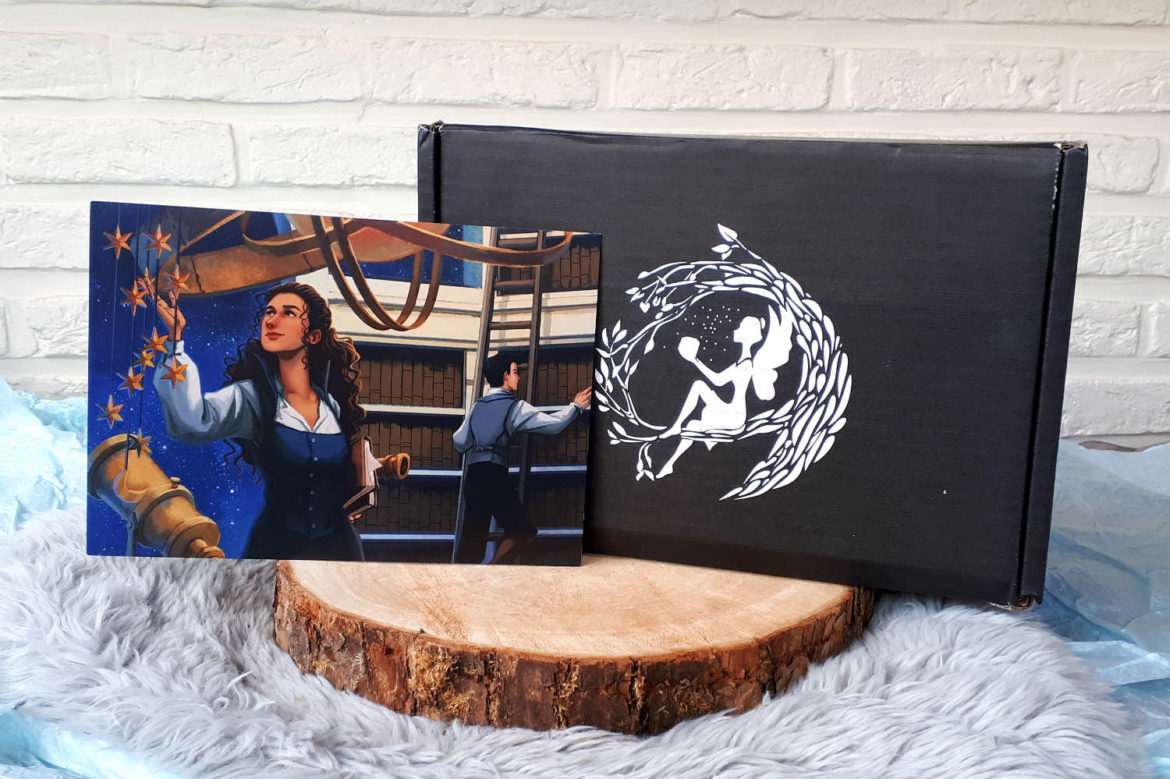 Hi everyone! What did you want to become when you were a child? I dreamed of becoming an astronomer, studying the universe. I even had a telescope! But life happens and that dream faded to the background. However, I am still fascinated by the night sky. So you can imagine my joy when I learned that the theme for the January 2020 Fairyloot box would be “Moon & Stars”. Let’s dive in and see what was in the box!

As always, we begin this unboxing with the spoiler card. On the back of this card, we find artwork by Taratjah. I adore the colours in this, the blue and gold go so well together!

The first item in this box is a stunning necklace. It is designed by Noverantale and shows the phases of the moon and a couple of stars in silver against a black background. As a space nerd, I love this and will definitely wear it a lot!

If you are active in Instagram’s bookstagram community, you are undoubtedly familiar with fairy lights. I have a set as well that I used a lot back when I was still active on IG. But now I have another set. And not just any regular string of lights. Oh no, these lights are star-shaped! Aren’t they gorgeous?!

Next up, we have a trinket tray. I love the rainbow colours and the face-in-the-moon shape! I don’t really use trinket trays, because my cats would steal everything. But I’ll probably just put this one somewhere on display, it’s just too cute not to use it.

The following item is something that always comes in handy. It’s a (very shiny) notebook! The quote on the cover is from Illuminae by Amie Kaufman and Jay Kristoff. Don’t you love how much it shines? There aren’t that many pages in this notebook, but it’s still useful. Now if I could only just get myself to write in it… *looks at her collection of unused notebooks*

Up next, there’s a pillow case! BeckyThornsDesigns created this item and I loooove the gorgeous blue colour of it! On one side, there’s a quote by Oscar Wilde that reads “With freedom, books, flowers, the moon, who could not be happy?”. And on the other side, there’s an illustration that perfectly captures this quote. Guess I’ll have to buy some pillows to put inside so I can put this on display!

My very first Fairyloot box was October 2017, but the month before that, the box featured Even the Darkest Stars by Heather Fawcett. The next item is inspired by that book. It’s an enamel keychain, designed by DustAndPages. It shows a mountain landscape with moon and stars, and an adorable dragon. And there’s more! This keychain has a glow-in-the-dark effect! I think I might start using this one!

And there are more stars in this January 2020 Fairyloot box! Regular paper clips might be a bit boring, so why not change things up with these adorable moon and star paper clips? When you put them on some papers, you’ll notice how on one side they’re star-shaped, and on the other side there’s the moon. That’s so cute!

Before we move on to the featured book of the month, there are the tarot cards. Gabriella Bujdoso designed these and they show two characters from Sabaa Tahir’s An Ember in the Ashes. I’m pretty sure the Queen of Cups is Laia, but I have to admit I am not certain who the King of Cups is. Which reminds me I really need to read the rest of the series!

Furthermore, there is the bookmark featuring this month’s artwork, and the Fairyscoop newsletter.

And now it’s time to reveal the featured book of the January 2020 Fairyloot box! It is… Woven in Moonlight, by Isabel Ibañez! Ximena is the decoy condesa, a stand-in for the last remaining Illustrian royal. Her people lost everything when the usurper, Atoc, used an ancient relic to summon ghosts and drive the Illustrians from La Ciudad. When Atoc demands the condesa’s hand in marriage, it’s Ximena’s duty to go in her place. If she can find the relic, she can return the true aristócrata to their rightful place. Ximena hunts for the relic, using her ability of spinning thread from moonlight to hide messages in tapestries for the resistance. But when she is challenged, her mission becomes more complicated. There could be a way to overthrow the usurper without starting another war – but only if Ximena turns her back on revenge… and her condesa.

This book is inspired by Bolivian politics and history, and I can’t wait to dive into this world! This is a special edition of the book, with an exclusive cover, artwork on the reverse of the dust jacket, and embossed stars and moon on the hardcover. And it is signed by the author. Also included is a set of cute stickers, and a letter from the author with character artwork (by KatBDraws) on the back.

And that’s all for the January 2020 Fairyloot box. My favourite items in this box are the necklace, the fairylights and the paper clips. What are yours? Let me know in the comments below!