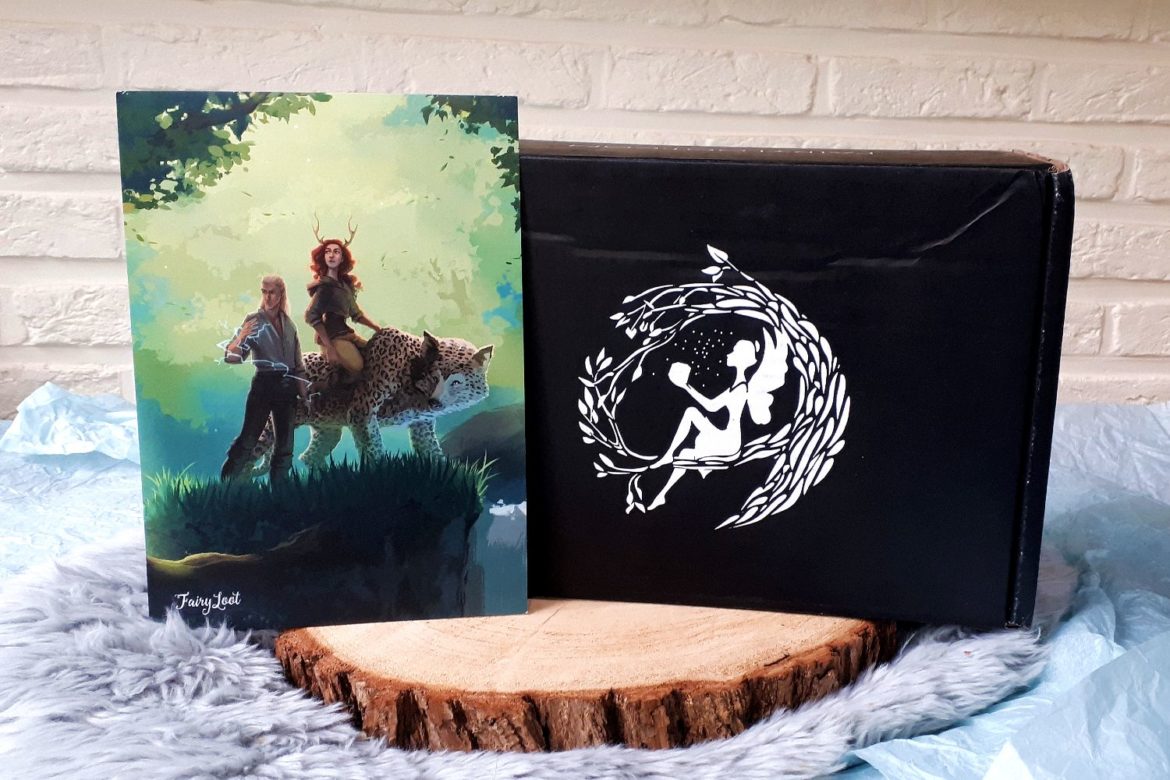 Hi everyone! How’s it going? I hope you’re all safe and healthy, and not too stressed-out with *waves hand at world*… But let’s not talk about that today, instead we should focus on fun stuff. Like books, and bookish goodies. Here’s my unboxing of the June 2020 Fairyloot box, which was all about “A Different Kind of Magic”!

As always, we begin this unboxing with the spoiler card with the details of all the goodies. On the reverse, there’s artwork by Taratjah, which you can see in the big image at the top of this post. I am fascinated by the big cat with the head of a wolf!

The first item in this box is a pair of ankle-height socks. They’re inspired by Samantha Shannon’s The Bone Season and feature the book’s cover design. I seem to misplace my socks all the time (or rather, our washing machine eats them!), so these come in very handy!

Next up, we have a set of coasters inspired by Avatar: The Last Airbender and created by Noverantale. I have to admit I have never watched the show, but I do know the memes. And I love these hexagonal coasters featuring the four elements!

The next item looks amazing! It’s an iron-on patch, created by DustAndPages. Just look at the gold! It is inspired by The Starless Sea by Erin Morgenstern, which I haven’t read yet. But the book sounds interesting and if it’s as gorgeous as this patch, I’m going to adore it!

Up next, we have an enamel pin! JezHawk created this pin featuring a quote from Tricia Levenseller’s The Shadows Between Us. The quote reads “Love is an excellent motivator to kill”. And did you notice the sword/dagger?! I thought the book itself was a bit “meh”, but this pin is pretty!

As you might know, I have a bit of a tea addiction. That means I already have a collection of tea strainers, from the cute to the standard ones. But I never say no to a new one! And what better book to inspire a tea strainer than Alice in Wonderland?! I absolutely LOVE this adorable tea pot! It comes with a little label/counterweight thingy that says “drink me”, and a saucer to put the strainer on when your tea is ready. How adorable!

The next item is an art print by Arz28. This artwork is inspired by Blood Heir by Amelie Zhao (which, surprise, I haven’t read yet). But I love this artwork and the enemies-to-lovers vibe these characters radiate makes me want to read it!

Before we move on to the books (yes, plural!) included in the June 2020 Fairyloot box, I have to show you the tarot cards. I’m pretty sure these cards are inspired by A Darker Shade of Magic by V.E. Schwab. The Ace of Swords can’t be anyone else than Lilah Bard, while the Two of Swords is Kell. (the spoiler card says the cards are Two and Ace of Cups, and are inspired by Throne of Glass, but yeah no, there must have been a mix-up there).

There’s also the Fairyscoop newsletter and a bookmark featuring this month’s artwork.

So before I show you the featured book of the month, there is actually another book in this box! It’s Namina Forna’s The Gilded Ones. This book won’t be published until spring 2021, but thanks to Fairyloot, we already got a copy! It tells the story of Deka, who lives in fear of the blood ceremony that will determine if she can become a member of her village. But on the day of the ceremony, her blood doesn’t run red, but gold – the colour of a demon. She is forced to leave the village with a mysterious woman, destined to join an army of girls like her – and the only ones able to stop the empire’s greatest threat. I can’t wait to read this, and the book itself is so pretty! Just look at the shiny cover and the green sprayed edges!

And so the time has come to unveil the featured book of the June 2020 Fairyloot box! It is… Forest of Souls, by Lori M. Lee! Sirscha has trained for years to become the queen’s royal spy, but then her best friend Saengo is killed by shamans – and Sirscha restores Saengo back to life. Unveiled as the first soulguide in living memory, she is summoned to the domain of the Spider King, who has used his influence over the Dead Wood – an ancient forest possessed by souls – to enforce peace between the kingdoms. Now, with the trees growing wild, only a soulguide can tame them. Now Sirscha must master her newly awakened powers before the trees shatter the peace, or claim her friend Saengo.

I am so excited about this book (although as someone who is terrified of spiders, I’m a bit anxious about the whole Spider King stuff)! This is yet another exclusive Fairyloot edition: it has green letters on the cover instead of yellow and orange; it is signed by the author, and there is artwork (by Arz28) on the reverse of the dust jacket! And there is also a letter from the author with more character art by Arz28 on the back.

And that concludes my unboxing of the June 2020 Fairyloot box. My favourite items – besides the featured book – are the tea strainer and the extra book. What are yours?