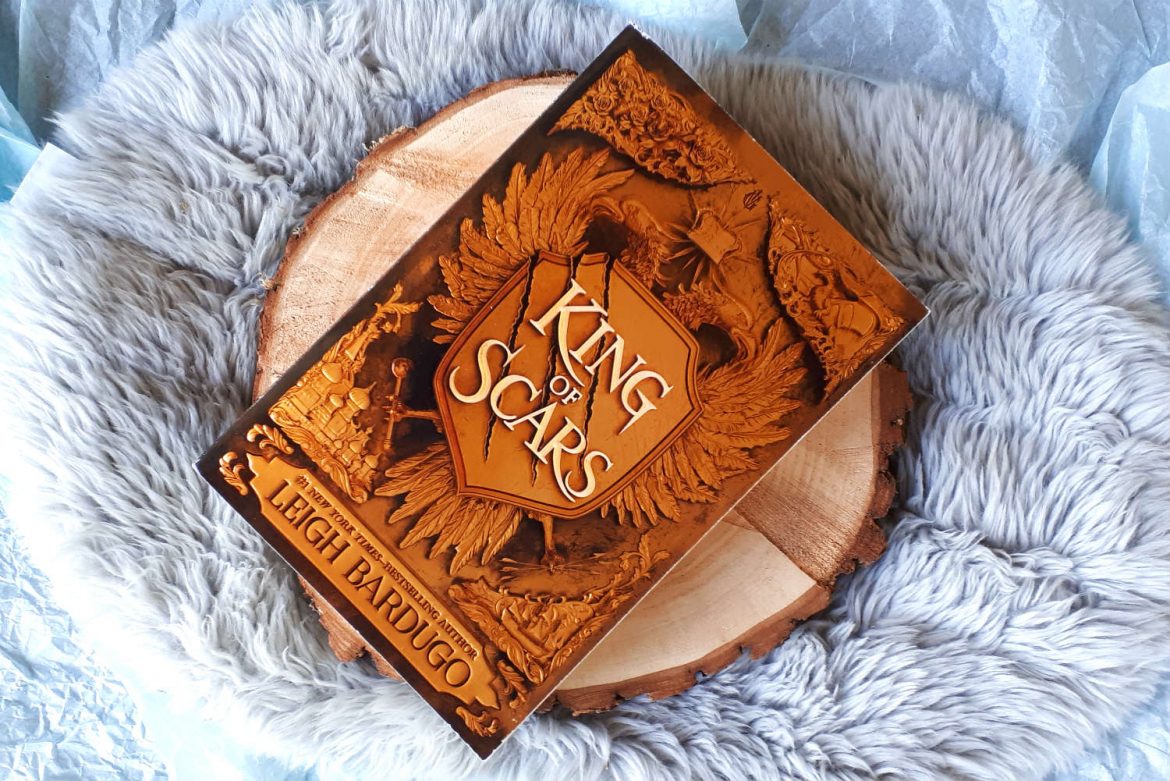 Every once in a while, there’s a big red circle in my calendar. One I put there months in advance. And in that circle, there’s a book title, followed by “OUT TODAY!”. King of Scars was one of those books I was ridiculously excited about. But did it live up to my high expectations? Find out below!

King of Scars is a spin-off of Leigh Bardugo’s other books in the Grisha world. First we had the original Grisha trilogy, in which we met Alina, the Darkling and Nikolai Lantsov. This was followed by the Six of Crows duology, which introduced us – among others – to Kaz, Inej and Nina. And now there’s King of Scars, with fan-favourite Nikolai as the title character.

After the events in the previous series, Nikolai is a changed man who carries darkness within him. Together with Zoya, a powerful Grisha and a close friend, he seeks a cure. This quest will take him on a journey that makes him risk everything. Meanwhile, Nina is on a mission of her own. She is searching for Grisha in the hostile country of Fjerda. But mysterious voices lead her to a village where a shocking discovery waits.

So officially King of Scars is the first part of the “Nikolai duology”, and seeing how it’s called KING of Scars, you would think Nikolai is the main character. Right? Wrong. This story is just as much about Nina and Zoya, maybe even more so. And don’t get me wrong, I adore both of them. But I was just expecting more Nikolai, I suppose… It also doesn’t help that our favourite prince is so dull in his own POV chapters.

The reason we all fell in love with Nikolai, was his wit, his banter. But in his own POV chapters, this just isn’t there. It is present in Zoya’s chapters, however, but it feels weird not to see these funny conversations through Nikolai’s eyes. And yes, I know it makes sense that Nikolai isn’t the same light-hearted man he used to be. I just wanted the occasional flicker of it in his own POV.

It also doesn’t help that Nina’s story is completely separated from Nikolai and Zoya’s. And not just geographically. I’m sure it will all come together in the second book, but at the moment I don’t see the link between these plot lines. Which results in being janked out of one story arch and thrown into the other with every new chapter. And that’s… not so good for immersion, I feel.

Not only did we switch constantly between both storylines, there also didn’t seem to *be* a lot of story happening. It took so long for things to actually get going. And even then… It’s not that I was ever truly bored. Not at all. Bardugo knows how to keep her readers entertained. But the plot meandered on and on, resulting in a book of 500 pages of which at least 10 percent could have been cut.

And let’s talk about the ending for a moment. I’m not going to go into details or spoilers, so don’t worry. But the ending, the twist that was supposed to get us all excited for the sequel? Nope. Nopenopenope. Nope. Not to toot my own horn, but I more or less predicted the ending in the first 100 pages. And I spent the rest of the book hoping it wouldn’t go there. Alas, it did. Again, no spoilers here, but this ending felt like a cheap cop-out. I was expecting better from Bardugo.

Am I going to pick up the sequel? Hell yes! I love these characters and I need to know what happens to them. But maybe I need to keep my expectations at a realistic level. That wasn’t the case for King of Scars. It’s not a bad book, not at all. I’ll say even more: it’s a great book. But it’s not Bardugo’s best work and that clashed with my expectations for Nikolai’s story, I think.