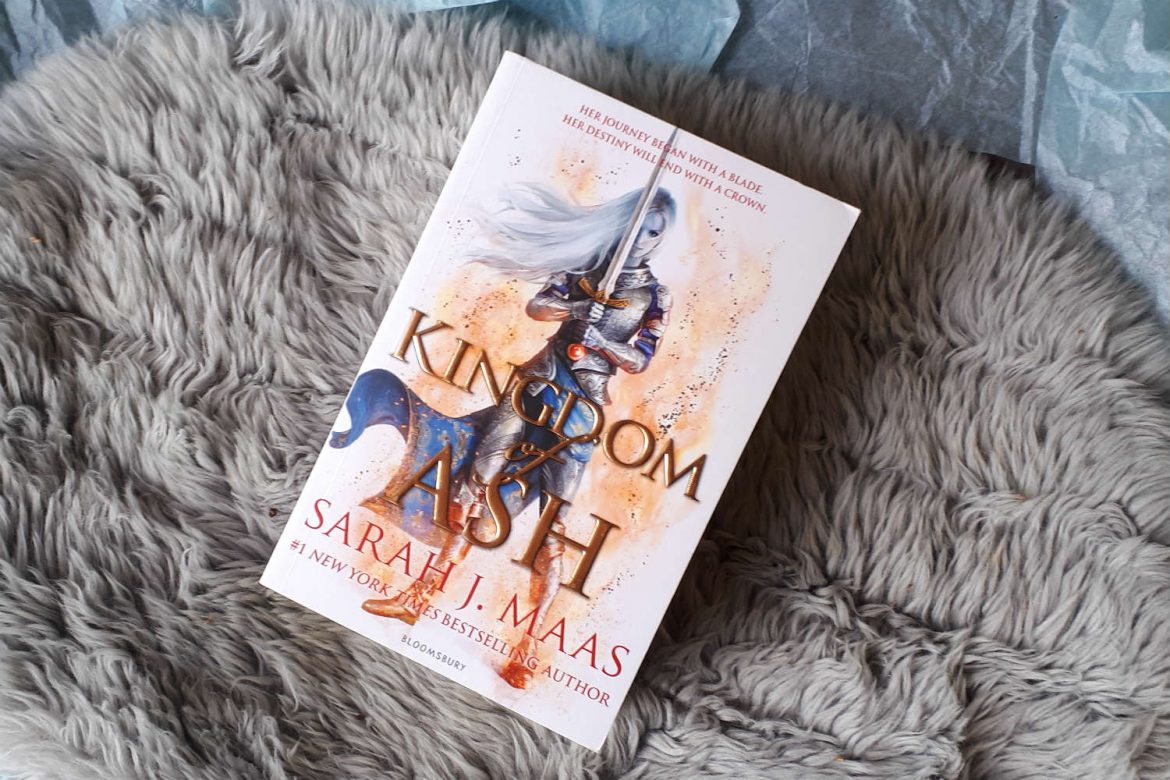 Hi everyone! I’m back after a week off. And I have a review of one of last year’s hottest books, Kingdom of Ash by Sarah J. Maas. This is the final book in the hugely popular Throne of Glass series. Is it a worthy finale with a fitting end? Or did it leave me wanting more?

WARNING: this review contains spoilers for the previous books in the series, and slight spoilers for Kingdom of Ash itself (because there are some issues that bothered me and I just have to talk about them). I’ll try to keep it vague and won’t mention names though.

As you might remember from my Tower of Dawn review, the storyline had been split up with that book describing the events on the Southern continent and Empire of Storms (the book before that) focusing on main continent Erilea. Now Kingdom of Ash picks up all these storylines in preparation for the final battle.

And what a rollercoaster this is! There is so much going on all across the world and the main characters are scattered everywhere. So we keep jumping around, traveling with these characters to the finale battle. This book is well over 900 pages long, but it manages to keep the reader entertained. Although there will of course always be storylines you find less interesting than others.

For example, I never was the biggest fan of Aelin. Yes, you read that right, I didn’t love the main character of this series… I found her a bit arrogant and it bothered me so much that she never told her allies about her plans, instead letting them fear all was lost and then revealing some secret plan she had all along. I mean, you can do that once or twice, but it gets old really fast. And I think your allies might start getting angry. I definitely would be. In this book, she didn’t get on my nerves as much. She still had a few surprises for the reader, but at least her allies (or well, Rowan) knew of them. Most of the time…

That being said, I just wasn’t entirely happy with the finale. First of all, I fully expected heartbreaking moments. Tons of them. But there… just… weren’t… that many…? There was one – ONE! – scene that made me cry. But that was 200 pages before the end. There was one more scene a bit later that hit me in the feels, but not as much. And everything that followed was just so anticlimactic. And even that one scene just didn’t do the characters involved any justice. They deserved more. Especially when the other characters’ arcs have such a clean and perfect ending.

There were even some characters whose arcs in my eyes seemed to lead to their deaths. Like they would get the chance to make things right, to redeem themselves and then find peace in death. Or something. But no, almost everyone gets a (more or less) happy ending. There is a distinct lack of consequences in this book and it bothers me so much.

Speaking of the ending, there was such a massive deus ex machina. It came out of nowhere and made me wonder if I had missed some part of the world building or foreshadowing. It felt like Maas just came up with some big and epic solution on the spot. Please don’t do that. Give us some world building in which the seeds are sown for this solution. And then make us forget about it, until it pops up again and we go “aaaaah, right!”.

Finally, I want to talk about Maas’ desire to put every character in a heterosexual relationship. She seems incapable of letting her main characters end up single or in a non-het relationship. She did the same with her other series, A Court of Thorns and Roses (although she then tried to compensate a lack of diversity by making every new character she introduced in the third book either a POC or LGBTQ, and not every major character ended up with a partner). But now she’s back to it. And I don’t like it. At all. Gives us some diversity, it can’t be that hard, right?

Okay, I lied, I have one final thought/question. How did all of this, this entire series of 7 big books, journeys, relationships, battles, all happen in JUST ONE YEAR?! This timeline seems wild. Or do years in Erilea last longer than Earth years…? I am just so confused…

And so we have reached the end of the Throne of Glass series. Kingdom of Ash was a fitting finale, because it embodied all that the series was. It had the same epic battles and interesting characters, but it also had the same love for Deus Ex Machina tricks, slightly annoying (in my eyes) protagonist and lack of diversity, all wrapped up in an ending that was too clean. So all things considered, if you loved the previous books, you’ll love Kingdom of Ash. If you didn’t like those, you won’t enjoy this one either.

Final rating: 3,5 stars out of 5, rounded up to 4 because of the cameo by the protagonists from Maas’ other series ACOTAR.

Aelin Galathynius's journey from slave to assassin to queen reaches its heart-rending finale as war erupts across her world ... She has risked everything to save her people - but at a tremendous cost. Locked in an iron coffin by the Queen of the Fae, Aelin must draw upon her fiery will to endure the months of torture inflicted upon her. The knowledge that yielding to Maeve will doom those she loves keeps her from breaking, but her resolve is unravelling with each passing day... With Aelin imprisoned, Aedion and Lysandra are the last line of defence keeping Terrasen from utter destruction. But even the many allies they've gathered to battle Erawan's hordes might not be enough to save the kingdom. Scattered throughout the continent and racing against time, Chaol, Manon, and Dorian must forge their own paths to meet their destinies. And across the sea Rowan hunts to find his captured wife and queen - before she is lost to him. Some bonds will deepen and others be severed forever, but as the threads of fate weave together at last, all must fight if they are to find salvation - and a better world.Years in the making, Kingdom of Ash is the unforgettable conclusion to Sarah J. Maas's #1 New York Times bestselling Throne of Glass series