Kingdom of the Blazing Phoenix – Review 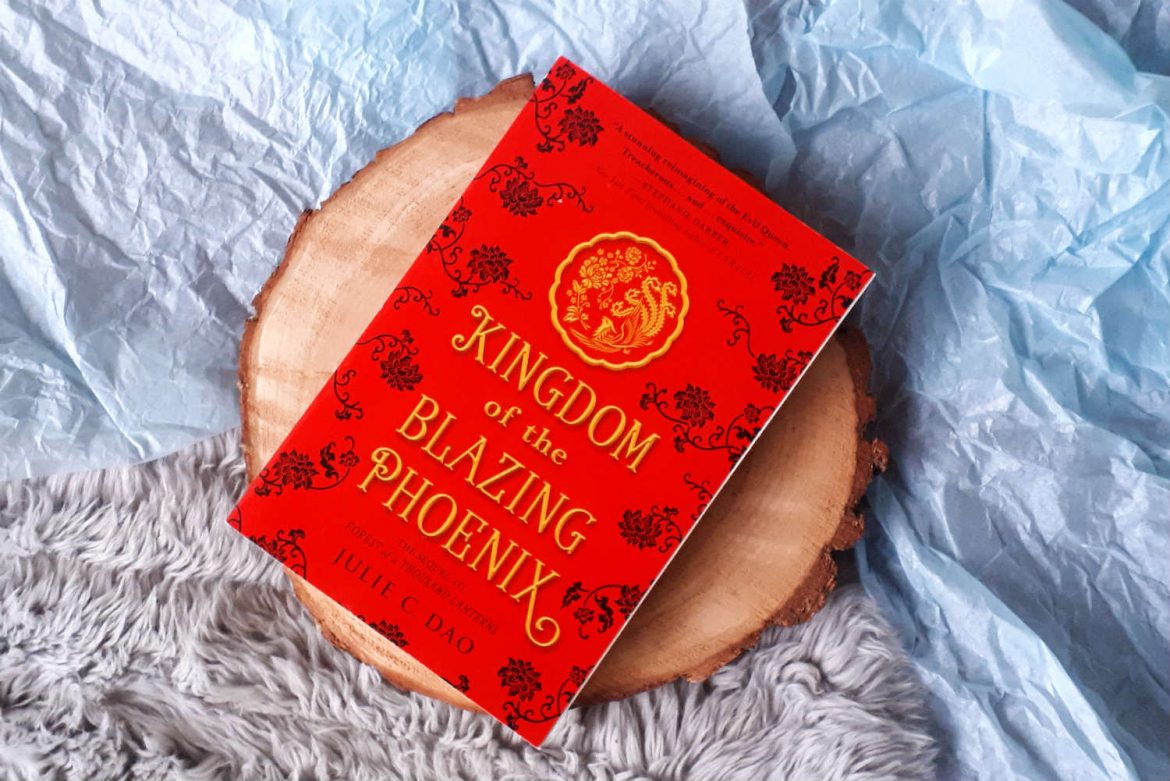 Last year, we met Xifeng in Forest of a Thousand Lanterns. She left her rural village behind and followed her ambitions to the imperial palace. That book ended with Xifeng as empress. In Kingdom of the Blazing Phoenix, we return to this lush world, where Xifeng’s stepdaughter now takes the spotlight.

Jade, the rightful heir to the throne, has grown up in a secluded monastery. Now she is called back to the imperial city, to live closer to her father, the emperor, and her stepmother Xifeng. She discovers the truth about Xifeng and her evil schemes, and sets out on a journey to raise the Dragon Lords and defeat the empress and the Serpent God.

Honestly, this is such a hard book to review and rate. Kingdom of the Blazing Phoenix wasn’t bad on itself, but it was just so different from the first book in this series. In Forest of a Thousand Lanterns, we saw events through Xifeng’s eyes. And while I didn’t really connect with her, it was still fun to read about her ambition, her ruthlessness and her internal struggle.

Jade, on the other hand, was just so… dull. She was pure good and kindness. And while I applaud kindness in real life, it’s also a bit boring to read about in stories. Her only “flaw” was her reluctance to step up as heir (and even that is portrayed as a good thing, because she’s not hungry for power, yada yada).

I know this duology is a retelling of Snow White, with Jade as the princess and Xifeng as Evil Queen, but after giving us the wonderfully complex and layered Xifeng as main character in the first book, this felt like a step backwards. Jade felt more like a special snowflake, because everything she did, was the exact right thing.

And as you know by now, I LOVE court intrigue and scheming. Which the first book was full of. Unfortunately, Jade doesn’t stay in the palace for long. She soon sets out on a quest that takes her to all corners of the world to find magical items. It wasn’t what I was expecting and on top of that, it all was so easy for Jade. Not a single time did I get the feeling she was going to fail.

That being said, the writing itself was amazing! Julie C. Dao knows how to wield words and she creates a wonderful world with a rich mythology. I can’t wait to read more of her stories. But please give us more Xifengs and fewer Jades! So while I rated Forest of a Thousand Lanterns 4 stars, I’m giving Kingdom of the Blazing Phoenix 3 stars out of 5.

Princess Jade has grown up in exile, hidden away in a monastery while her stepmother, the ruthless Xifeng, rules as Empress of Feng Lu. But the empire is in distress and its people are sinking into poverty and despair. Even though Jade doesn't want the crown, she knows she is the only one who can dethrone the Empress and set the world right. Ready to reclaim her place as rightful heir, Jade embarks on a quest to raise the Dragon Lords and defeat Xifeng and the Serpent God once and for all. But will the same darkness that took Xifeng take Jade, too? Or will she find the strength within to save herself, her friends, and her empire?Set in an East Asian-inspired fantasy world filled with breathtaking pain and beauty, Kingdom of the Blazing Phoenixis filled with dazzling magic, powerful prose, and characters readers won't soon forget.Fans of Stealing Snow, Red Queen, and The Wrath and the Dawnwill hungrily devour this page-turning read.