The Lunar Chronicles – Rollercoaster of retellings 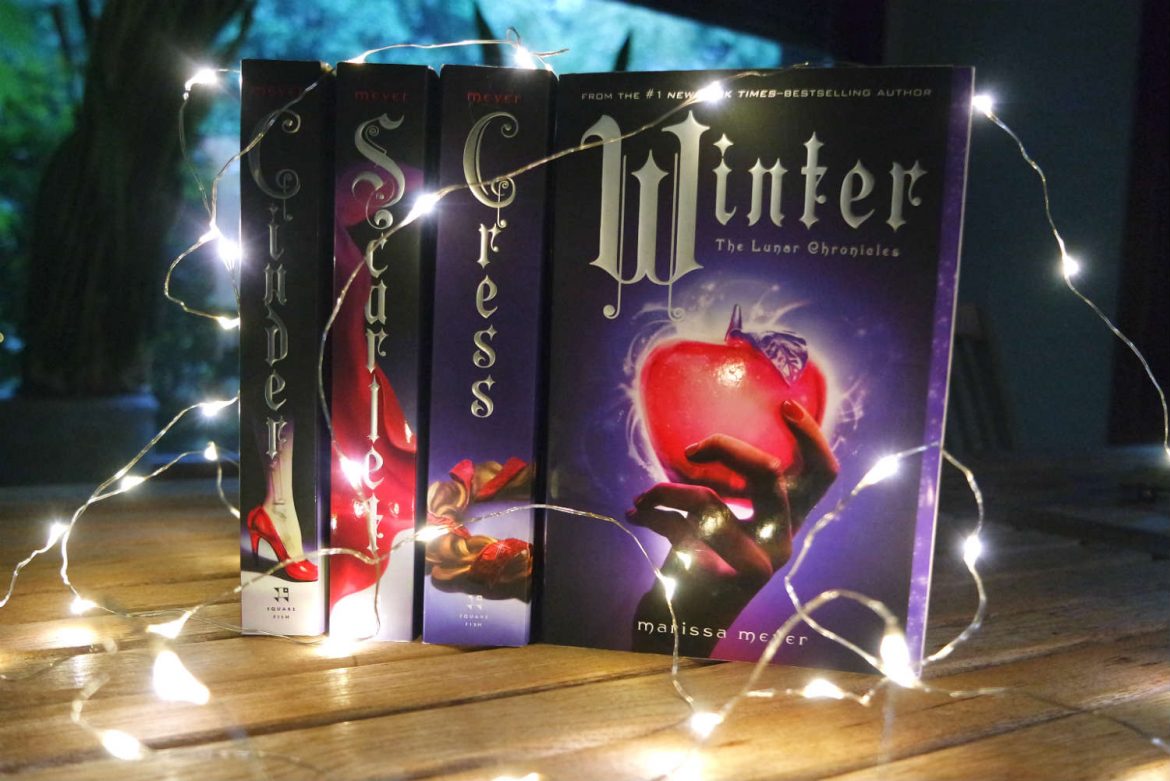 A while ago, I told you about Cinder, the cyborg mechanic living New Beijing. After meeting Prince Kai, she involuntarily got involved in the political struggle between Earth and Luna, a kingdom on the Moon ruled by the terrible Queen Levana. How does the Lunar Chronicles series continue?

Marissa Meyer got her inspiration from classic and well-known fairy tales. Cinder is a cyborg with a prosthetic foot that she can easily remove like a true Cinderella. In the next books, we are introduced to Scarlet (wearer of a red hoodie, who lives on a farm with her grandmother and meets a mysterious guy named Wolf), Cress (a young woman with extremely long hair, locked in a satellite orbiting Earth), and Winter (stepdaughter of the evil queen, and described by everyone as the most beautiful person on Luna). And of course this fairy-tale squad all get their own love interests in the books.

I loved how individual each character is. The four girls all have different personalities, and so do the boys. This makes it fun to skip from one point of view to the other, because they all have a distinct voice. Adding these characters one book at a time makes the story expand gradually. At first it’s just Cinder and Kai, but by the end of the final book we have an impressive cast, high stakes and ever-changing odds.

The final book, Winter, is over 800 pages long, yet it never gets dull. I can’t go into detail here without spoiling the previous books, but it’s such a rollercoaster. Levana proves herself to be a cunning opponent with lots of tricks up her sleeve. And the peculiar gifts of the people of Luna, with their ability to cast glamours, make for quite a few shocking twists.

At times, the Lunar Chronicles books can be rather violent, especially the last one. Luckily, there is also plenty of comic relief. This mainly comes from Thorne and Iko. Iko is an especially interesting character, because she is an android with a faulty personality chip. Somehow, this gives her a more “human” personality, with sarcasm and other traits you wouldn’t expect from an android. In the first book I felt like Meyer missed a chance to explore what it means to be human, but in the later books this does get some attention without being too on-the-nose.

These four books form the core of the Lunar Chronicles series. But if you can’t get enough, there is also Fairest, which tells the story of Levana’s youth. This is listed as part 3.5, so fits best between Cress and Winter. In Winter there are a few references to Levana’s past, but nothing that requires reading Fairest to understand. And then there’s also Stars Above, a collection of short stories starring the main characters in prequels, and one epilogue to Winter.

If you love creative reimaginings of fairytales, you can’t go wrong with The Lunar Chronicles. This series started out pretty modest with Cinder, and expanded to a sweeping tale that encompasses adventure, friendship and humour in an engaging world (and moon). So that’s a solid 4.5 stars (rounded up to 5) for me!

The #1 New York Times-bestselling series that brought fans a complex and thrilling world of cyborgs and evil queens, available together for the first time in one beautiful boxed set

The Lunar Chronicles are futuristic retellings of classic fairy tales. In Cinder, a teenage cyborg (half human, half machine) must deal with a wicked stepmother, start a rebellion against the evil Queen Levana, and decide how she feels about a handsome prince. As the series continues, Cinder forges alliances with Scarlet, a spaceship pilot who is determined to solve the mystery of a missing loved one with the help of a magnetic street fighter named Wolf; Cress, a computer hacker who is imprisoned by Queen Levana; and Winter, a princess who's in love with a commoner, and who discovers that Cinder, Scarlet, and Cress may hold the key to saving her kingdom and the world.