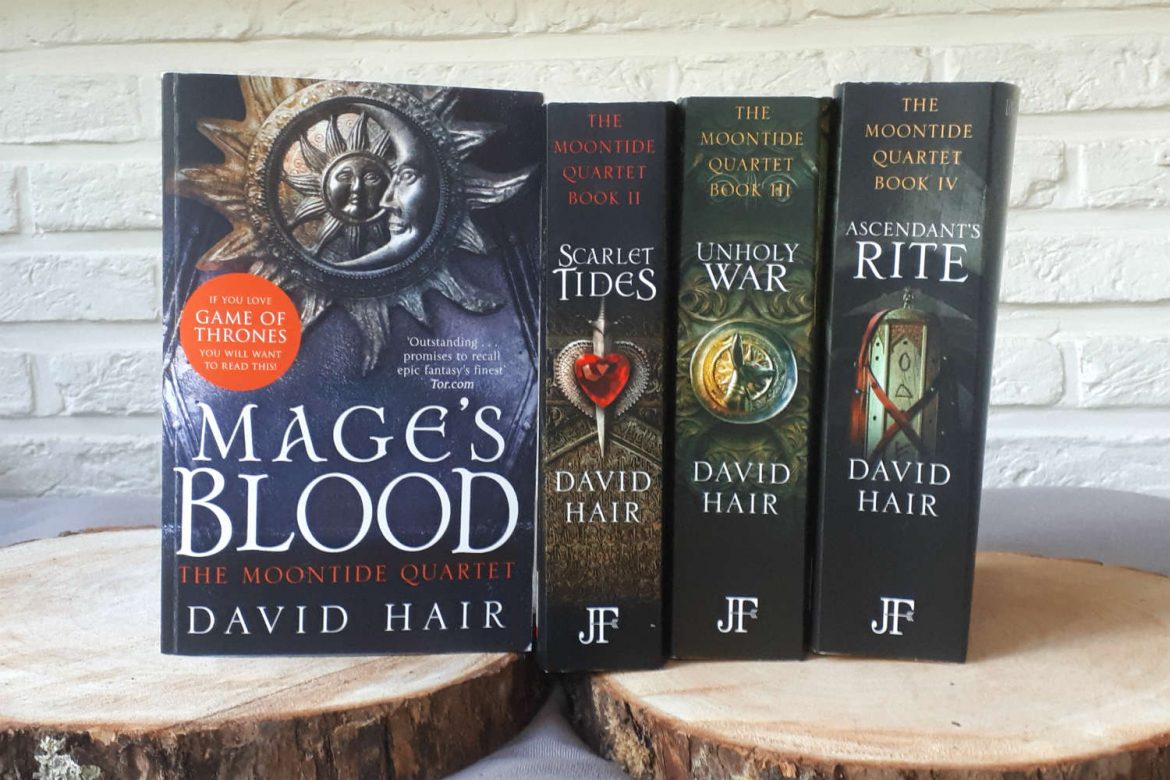 Yay, I’m back after taking a short break! And my blog is now officially one year old. I want to thank every single one of you, and I hope you’ll all keep coming back for more reviews, unboxings and other fun. But back to business now with a review of the Moontide Quartet by David Hair!

The Moontide Quartet is a series of epic fantasy books. They tell the story of Urte, a world divided into two continents. Once every 12 years, the ocean levels drop low enough for the bridge connecting the continents to emerge. This is the signal for the northern continent of Yuros to launch a crusade into Antiopia. But this time, the eastern continent is ready.

The scale of these books reminded me a bit of A Song of Ice and Fire. There’s a lot of scheming going on. Everyone has their own motives, so alliances shift constantly. But the main focus for the story is on a few seemingly ordinary people. First there is Alaron, a young mage student about to graduate. There’s his aunt Elena, assigned as a bodyguard/mentor to the children of the royal family of Javon (in the East). And finally, there’s Ramita, a market girl whose life is turned upside down when the most powerful mage in the world chooses her to become his wife.

We follow these three people in the lead-up to and during the Moontide, but we also meet a ton of other characters. Some are mainly good, some are mainly bad and others shift between the two. But there’s also a lot of character development, meaning characters aren’t fixed on this scale. For example, I didn’t like Kazim at first, but he started growing on me by the end of the second book and I ended up really loving him.

I was intrigued by the idea of the Moontide and the crusades, and I loved the diversity and cultures in this series. However, most cultures are clearly inspired by our own world and some names are almost literally copied from existing concepts. The name the eastern people use for their holy war? “Shihad.” The name for the devil? “Shaitan.” And there are even peaceful monks living in a monastery high up in the mountains who wear saffron robes. Yes, like buddhist monks.

This obvious link to our own world isn’t necessarily bad and it makes for a compelling story rife with conflict, but it feels a bit cheap. Why not create your own cultures, or at least your own words for concepts?

That being said, the story gripped my attention and this was a series that kept me thinking about it even during the day when I wasn’t reading. I love some good plotting, betrayal and unlikely heroes rising above themselves in dire circumstances, so you can imagine I adored these books.

One tiny note of criticism though: David Hair might need a better editor. I mean, I don’t mind an occasional spelling error. Especially not in books of this size. Of course you should aim for a flawless manuscript, but I’m well aware you can’t rule them out entirely. However, if they happen every few pages, it starts to get annoying. This was mainly an issue in the third book, so maybe its publication was a bit rushed?

Anyway, don’t let that distract you from the great story this quartet provides! If you love A Song of Ice and Fire, you’ll definitely enjoy this series. There’s even a Littlefinger-ish character that plays a major part in the Moontide Quartet. You might see more parallels with other characters, as well (but I won’t go into detail here). So if you’re looking for an epic fantasy series to spend the upcoming long dark nights with, I can recommend this one.

Most of the time the Moontide Bridge lies deep below the sea, but every 12 years the tides sink and the bridge is revealed, its gates open for trade. The Magi are hell-bent on ruling this new world, and for the last two Moontides they have led armies across the bridge on crusades of conquest. Now the third Moontide is almost here and, this time, the people of the East are ready for a fight... but it is three seemingly ordinary people who will decide the fate of the world.