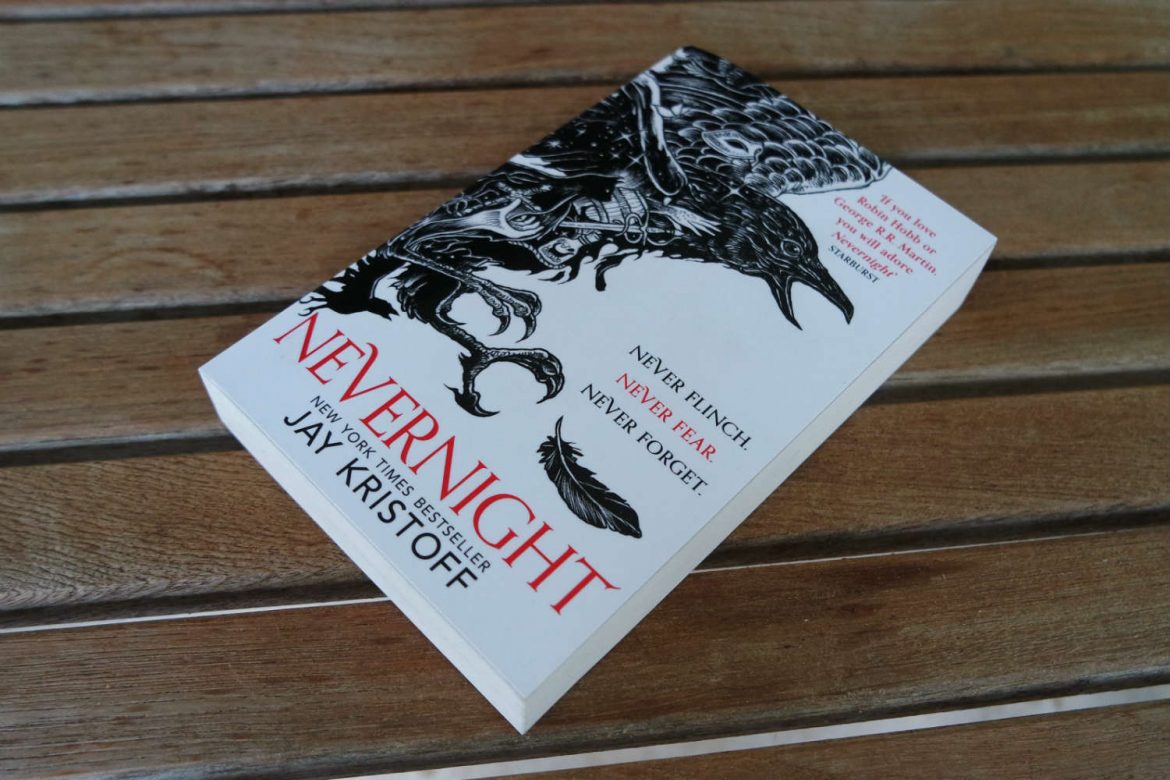 The cover of Nevernight may be predominantly black and white, but on the inside it’s red. Bloodred. And I love it!

Mia Corvere is an orphan who travels to the Red Church of Itreya to train as an assassin. Her main reason behind this is to take revenge on the people who killed her father and locked up her mother and baby brother. The only problem is that these people are the leaders of the city of Godsgrave.

So Mia and her shadowy companion, the wonderfully sarcastic talking not-a-cat Mister Kindly, start their training with the Red Church, together with about 28 others. It’s hard to keep track of how many classmates there are, since they tend to drop dead. One is murdered on the first day, the others die as a consequence of their lessons. Can’t identify the poison you’ve just unknowingly ingested? Too bad, it was nice to know you.

In a way, this training reminded me of Harry Potter meets the Hunger Games: relentless killing and competition in an old building where the stairs and hallways seem to shift constantly. But with way more blood. One example: assassins can teleport across the world by stepping into a portal that is in fact a pool of blood. Yep, Nevernight is that gory and delicious!

A quick warning though before you dive in (into the book, not the pool of blood): there are footnotes. Lots and lots of them. In fact, most of the worldbuilding happens in these footnotes. It takes a while to get used to them, and at first they kept pulling me out of the story. Luckily, Jay Kristoff also adds sarcastic comments in those footnotes to make it worth reading them. I suppose you could just skip them, but you might miss important explanations of how the world works.

Another thing that made it take a while for me to get into the story, was the frequent use of flashbacks. At first, we keep switching between the present and the past (printed in italics), which slows down the story.

But once the frequent flashbacks are over, this story keeps going like a truck without brakes. And the ending hits you like a truck as well. I. Did. Not. See. That. Coming. That’s all I can say about it. I knew a few characters were going to die in the end, but I did not expect those specific ones to. In that regard, this book is like A Song of Ice and Fire. It regularly pulls the rug from under you. And if you think a character has plot armor? Well, think again.

I don’t often give books 5 stars, but Nevernight truly deserves them in my opinion. I can’t wait jump into the sequel Godsgrave and witness how Mia’s hunger for revenge leaves a trail of blood in the streets. The as of yet untitled 3rd and final part is scheduled to release in September 2018.

From New York Times bestselling author, Jay Kristoff, comes a dangerous new fantasy world and a heroine edged in darkness. Destined to destroy empires, Mia Corvere is only ten years old when she is given her first lesson in death. Six years later, the child raised in shadows takes her first steps towards keeping the promise she made on the day she lost everything. But the chance to strike against such powerful enemies will be fleeting, so if she is to have her revenge, Mia must become a weapon without equal. She must prove herself against the deadliest of friends and enemies, and survive the tutelage of murderers, liars and daemons at the heart of a murder cult. The Red Church is no ordinary school, but Mia is no ordinary student. The shadows love her. And they drink her fear.