New Books I Look Forward To In August 2020 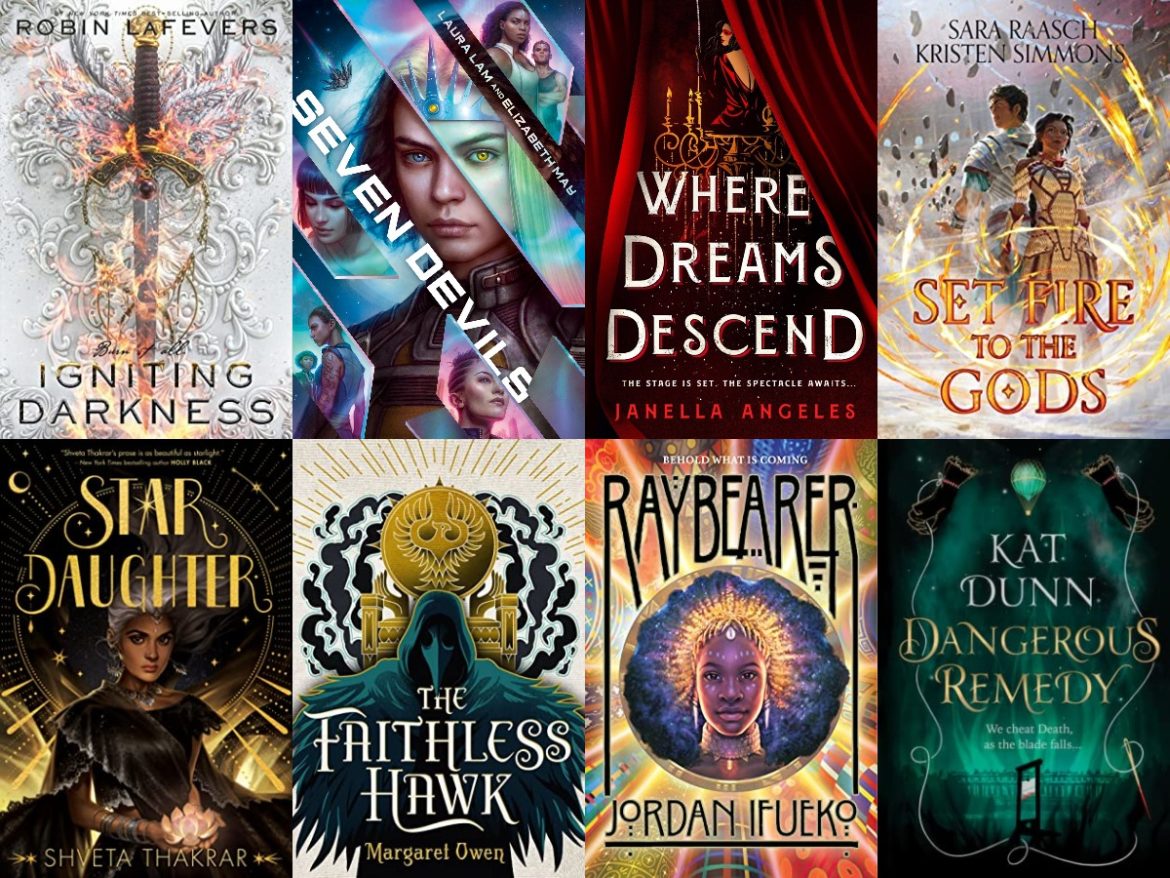 Hi everyone! How are you all doing? I hope you’re well despite *gestures at everything*. What’s the weather like where you live? Here it’s really hot today, but so far the summer has been bearable. Meaning I can actually do stuff instead of just lying around trying not to melt into a big puddle. But it’s still fun to settle down and do nothing. Especially when you have a good book to read. Speaking of books, I took a look at the new books hitting the shelves next month and there are quite a few exciting titles. So here’s my overview of August 2020 books!

If I missed a book, or if one of these has been postponed, let me know in the comments!

This is the finale of the Courting Darkness duology, which itself is a spin-off of the His Fair Assassin trilogy. It’s set in 15th-century France, and focuses on the women of the convent of Saint Mortain, who are trained as spies and assassins. I can’t tell you anything more without giving away too much about the plot of the other books, but let me tell you that the stakes are incredibly high after one of the novitiates made a costly mistake that endangers the entire convent. I got to read an excerpt of Igniting Darkness through Netgalley and my heart was racing like crazy! Out on August 4th!

The authors have stated that this book is aimed more at adult audiences (protagonists are in their 20s and 30s, there’s sex scenes, violence and swearing), but that it also has crossover potential. And look, “feminist space opera duology”? Where do I sign up?! It’s about Eris, who has faked her death to escape her life as the heir to the galaxy’s most ruthless empire. But her recruitment by the Novantaen Resistance throws her right back into the fray. Her new mission: to infiltrate a spaceship ferrying deadly cargo and return the intelligence gathered to the Resistance. But her partner for the mission bears an old grudge against Eris. And on the ship, they discover more than they bargained for. Can they, together with the fugitives they found, save the galaxy in time? Out on August 4th!

In a city covered in ice and ruin, a group of magicians face off in a daring game of magical feats to find the next headliner of the Conquering Circus. But an unseen danger strikes behind the scenes. As each act becomes more and more risky and the number of the missing magicians piles up, three are forced to reckon with their secrets: the powerful showgirl who wants to prove she’s the best, the enigmatic keeper of the club, and the brooding judge with a dark past. How amazing does that sound? I need this book right now! Out on August 25th!

Ash is descended from a long line of gladiators. When her mother dies in the arena, she vows to avenge her by overthrowing her fire god, whose temper has stripped her country of its resources. Madoc grew up fighting on the street to pay his family’s taxes. But he hides a dangerous secret: he doesn’t have the earth god’s powers like his opponents. His elemental gift is something else – something that hasn’t been seen in centuries. When Ash inadvertently throws the fire and earth gods into a conflict that can only be settled by deadly gladiator games, the fights put Madoc in Ash’s path. His powers are the weapon her rebellion needs, but he won’t jeopardize his family. And then they uncover an ancient war that threatens to unravel the world… Gladiators, gods, elemental magic? Yes please! Out on August 4th!

Sheetal is the daughter of a star and a mortal, making her used to keeping secrets and pretending to be normal. But when an accidental flare of her starfire put her human father in the hospital, Sheetal needs a full star’s help to heal him. Unfortunately, her mother returned to the sky long ago. Sheetal’s quest to save her father will take her to a celestial court of shining wonders and dark shadows, where she must take the stage as her family’s champion in a competition to decide the next ruling house of the heavens. This contemporary fantasy  is described as a mix of Hindu mythology and Neil Gaiman’s Stardust. Who can say no to that? Out on August 11th!

This is the sequel to The Merciful Crow, which I adored. I have to confess I don’t remember an awful lot about how that book ended, so I’ll need to refresh my memory before starting this one. But I can tell you that the main character is Fie, daughter of the chieftain of the Crows, the lowest caste, forced to travel around and deal with victims of the plague. When the Crows are called to collect the body of prince Jasimir, their whole life is turned upside down. Because the prince faked his death and now offers them a deal: protect him from the ruthless queen and he’ll protect the Crows. In this world, the castes are based on birds, each with their own powers, and magic can be extracted from teeth. TEETH! The Faithless Hawk is out on August 18th!

Tarisai was raised in isolation by a mysterious, often absent mother known only as The Lady. The Lady sends her to the capital of the global empire of Aritsar to compete with other children to be chosen as one of the Crown Prince’s Council of 11. If she’s chosen, she’ll be joined with the other Council members through a bond deeper than blood. That closeness is irresistible to Tarisai, who has always wanted to belong somewhere. But The Lady has other ideas, including a magical wish that Tarisai is compelled to obey: kill the Crown Prince once she gains his trust. Can Tarisai choose a different path for herself? I love this premise so much! Out on August 18th!

Technically, the ebook was published in May, but the physical copies were delayed due to the pandemic. So I’m kinda cheating here, but I can’t not talk about this book. Camille is a revolutionary’s daughter. She leads a band of outcasts: a runaway girl, a deserter, an aristocrat in hiding. As they Battalion des Mortes, they save those about to meet a bloody end at the blade of Madame Guillotine. But their latest rescue is not what she seems. She’s no aristocrat, but her dark powers make her wanted by both the Royalists and the Revolutionaries. But who and what is she? As Camille learns the truth, she is forced to choose between loyalty to those she loves and the future. Out on August 6th!

Looking for even more stuff to read? Here’s the list of new books hitting the shelves in August 2020!

Which August 2020 books are you most excited about? Let me know in the comments!