New Books I Look Forward To In December 2019 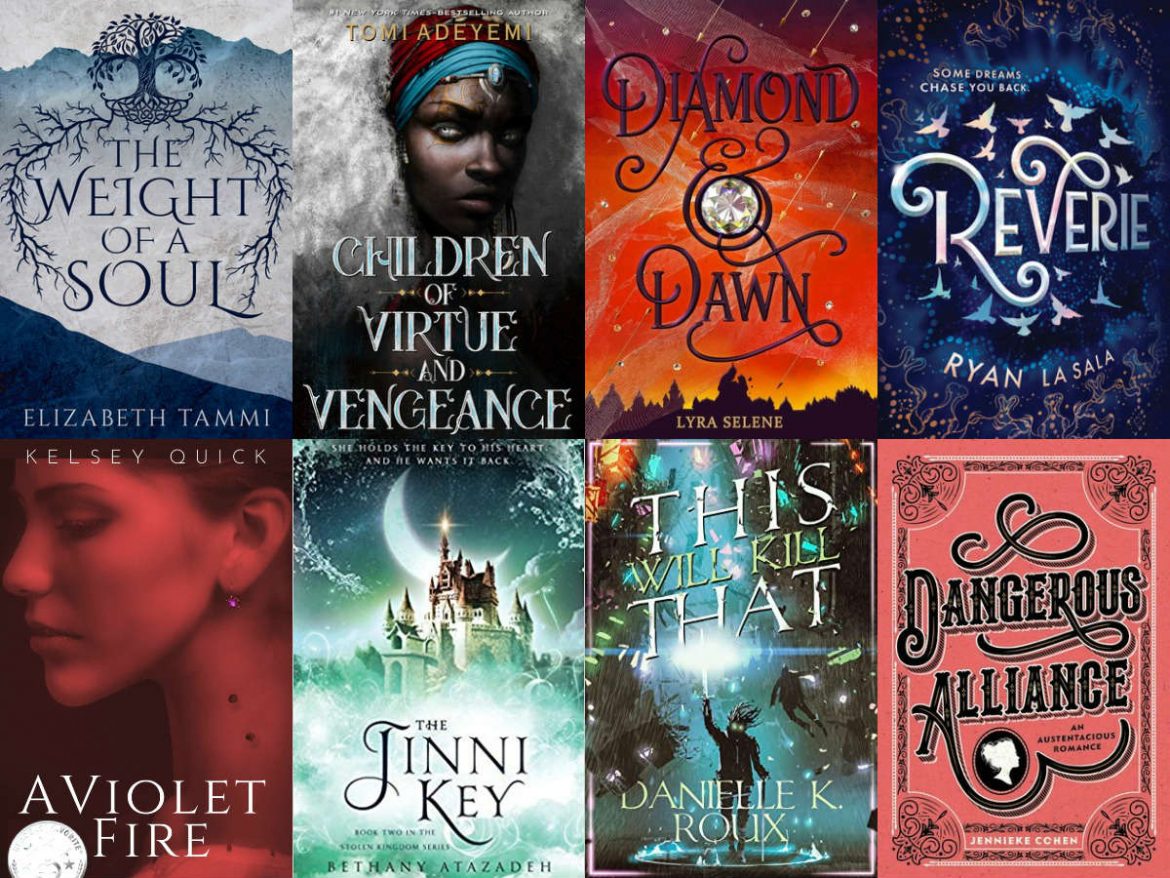 Hi everyone! November has come and almost gone, so it’s time to look ahead to the most wonderful time of the year. The holiday season is here! So pull out those decorations, your favourite blankets, and a pile of great books! Like every month, I made a list of all the YA books that will arrive in a bookstore near you in the upcoming weeks. December 2019 is a pretty quiet month, giving us all time to catch up on our TBR pile (jk, it’s hopeless). But I still marked 8 new books I’m excited about. Read on to find out more about them!

The Weight of a Soul – Elizabeth Tammi

When Lena’s younger sister Fressa is found dead, the whole Viking clan mourns, but Lena never recovers. She can’t rest until she knows what killed Fressa and why. And how to bring her back. So Lena strikes a deal with Hela, goddess of death. But Lena soon discovers dangerous secrets about her own family and finds herself in the middle of a plan to spur Ragnarök – the end of the world. Vikings and a deal with a goddess of death? This definitely goes on my TBR list. Out on December 3rd!

This is the sequel to Children of Blood and Bone, aka CBB. CBB is still on my shelf of unread books, so I’m not going to look at the synopsis of this sequel out of fear for spoilers. But I can tell you that CBB was one of the most popular books last year. It tells the story of Zélie, who is left without her mother after all magic has disappeared under the order of a ruthless king. Zélie gets the chance to bring back magic and strike against the monarchy. With the help of a rogue princess, she must outwit the crown prince, who wants to eradicate magic for good. This series is a West-African inspired fantasy, and it sounds so good. Children of Virtue and Vengeance is out on December 3rd!

This is another sequel to a book I haven’t read yet but that’s on my TBR list. In the first book, Amber & Dusk, Sylvie has the power to create illusions. She knows that gives her a place in Coeur d’Or, the palais of the Amber Empress, so she travels to the Amber City. But empress invites her in only as part of a wicked wager. Sylvie must assume a new name, Mirage, and begin to navigate the court. But it soon becomes apparent that nothing is as it appears and no one will answer her questions. I love court intrigue and undercover protagonists, so I have to get these books! Diamond & Dawn is out on December 3rd!

All Kane Montgomery knows for certain is that the police found him half-dead in the river. He can’t remember how he got there or why his life – and even reality itself – feels so different now. Three almost-strangers claim to be his friends and the only people who can tell him what’s going on. But as Kane and the others are dragged into worlds that materialize out of nowhere, he realizes that nothing is an accident. And they will have to do everything they can to stop a sinister force from altering reality for good. Look, I’m not the biggest fan of urban fantasy, but this story sounds absolutely mesmerizing! Out on December 3rd!

In the Vampire Stratocracy of Cain, human blood is scarce. For centuries, councils have tried to counter this by enslaving and breeding humans. Wavorly Sterling is a supply unit, bound to server her blood to her master for the rest of her life. But Wavorly was not bred in Cain and knows freedom, so she is determined to escape. However, her hate makes way for admiration for her master and savior, Anton Zein. Despite all the comfort, danger still lurks in the castle. Can Wavorly face her fears and doubts? VAMPIRES, BABY! These bloodsuckers are going to a bookstore near you on December 9th!

This is the second book in a series of four. The series is centered around the main character Arie, but every book introduces new characters. The first book, The Stolen Kingdom, was a loose Aladdin retelling, while this one is a retelling of the Little Mermaid. Arie, the main character, finds herself in trouble and the only one who can help her is a mermaid named Rena. When Rena finally is allowed to visit the surface on her 16th birthday, she watches a Jinni fall from the sky and chooses to save him. Soon, she can’t get him out of her mind. But maybe, with a little help from Arie, she doesn’t have to. It’s no secret that I love retellings, so it shouldn’t come as a surprise that this series goes on my TBR list.

This Will Kill That – Danielle K. Roux

District City is full of monsters. The kind who murder innocent people for no apparent reason. And leaders of rival Colors clash over the secrets of the past. After the Plague decimated the population, Rin figured people would have stopped killing each other, but they didn’t. Her parents disappeared and now she is set to take over as head of the Green faction. She must contend with her relationship to her rival, Lady Amaya. Amaya is running away from captivity and takes shelter with Rin. There she meets two young men with demons of their own. As they dig deeper, Amaya and Rin must decide whether to fight monsters, or become them. This sounds amazing: rivalries, enemies forced to work together,… How can you not be excited about this one? Out on December 3rd!

Lady Victoria Aston has everything she could want. But now she must marry, or find herself and her family destitute. Armed with the wisdom she has gained from Jane Austen’s novels, she enters society’s treacherous season. Unfortunately, Miss Austen can’t help her decide whether Mr. Carmichael is indeed a scoundrel, if her former best friend is out for her heart or her dowry, or how to fend off the attentions of Mr. Silby. And even worse, the books also can’t help her with the mysterious accidents that pop up around her and that could prevent her from surviving until her wedding day. I love cute historical romances and I keep telling myself I need to read more Jane Austen. So this definitely goes on my list! Out on December 3rd!

Looking for more new books? Here is the full list of the December 2019 YA releases!

And that’s the (relatively short) list of December 2019 YA releases. Which book(s) are you most excited about? Let me know in the comments below!