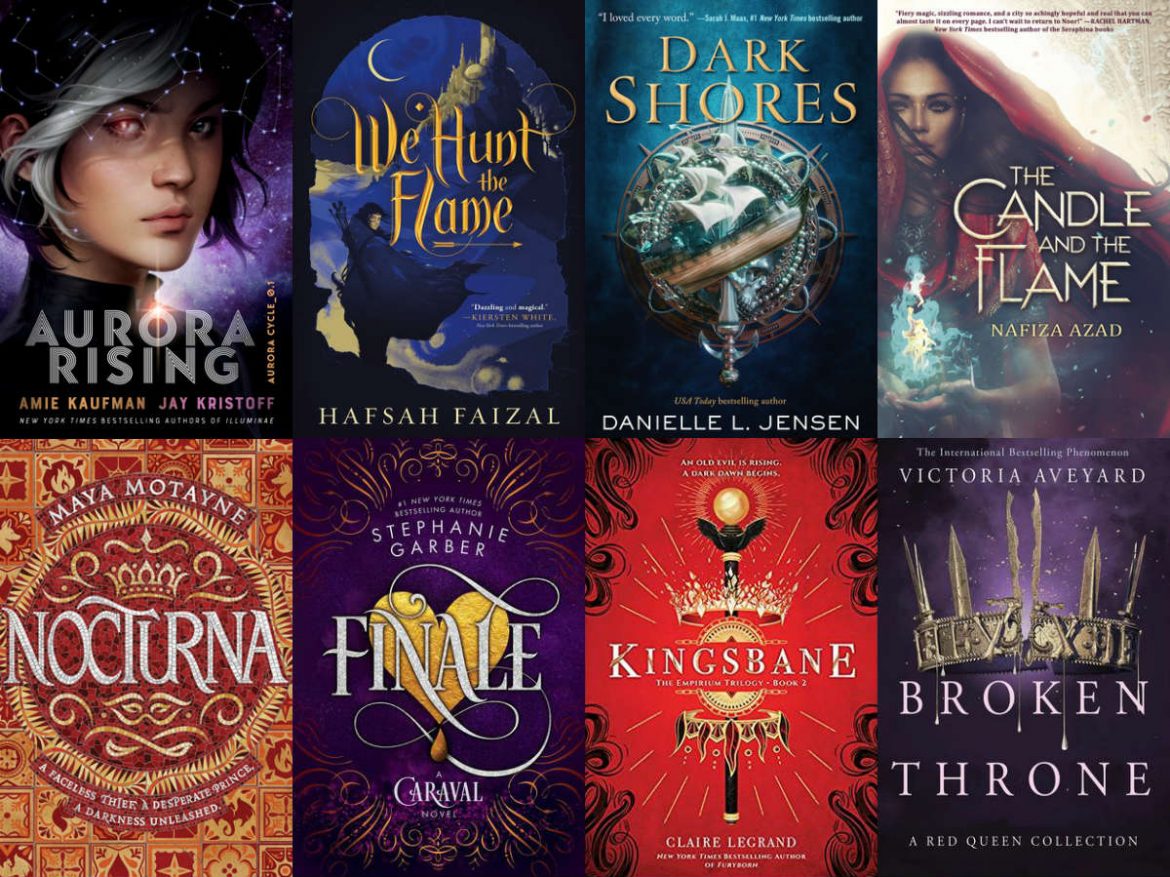 I can barely believe it, but another month has passed. And that means it’s time to take a look at the new books that will drop in stores next month. Science-fiction, stories set on the high seas and the Silk Road, and books that are part of popular series: these are the May 2019 releases I’m most excited about!

We begin this list with some science fiction. The year is 2380 and the graduating cadets of Aurora Academy are being assigned their first missions. Tyler Jones, the star pupil, is ready to recruit the squad of his dreams… but ends up with the misfits and dregs nobody else wanted. That alone would be enough trouble, but it gets worse. Tyler just rescued a girl from cryo-sleep and she could be the catalyst that starts an epic, all-out war. It’s written by the same duo that brought us the immensely popular Illuminae series (which is still on my TBR list). Out on May 7th!

We Hunt the Flame – Hafsah Faizal

Zafira is the Hunter, disguising herself as a man when she braves the cursed forest of the Arz to feed her people. Nasir is the Prince of Death, an assassin serving his father, the king. Both are legends in the kingdom of Arawiya, but neither wants to be. Now that war is brewing, Zafira sets out on a quest to uncover an artifact that could stop the Arz. Nasir is sent by the king to retrieve the artifact and kill the Hunter. This world is inspired by ancient Arabia and I can’t wait to read this one! Out on May 14th!

The Maarin are the only ones who possess the knowledge to cross the Endless Seas. But they have one mandate: East must never meet West. Teriana, the heir to the Maarin Triumvirate breaks this mandate to help her closest friend escape an unwanted betrothal. Meanwhile, Marcus, commander of the legion that helped conquer the East, does everything he can to protect his secret. When Teriana’s crew is captured by a senator, who also threatens to reveal Marcus’ secret, they are forced into an unlikely alliance. Adventures on the high seas, blackmail and something that sounds like the set-up for enemies-to-lovers? Yes please! Out on May 7th!

The Candle and the Flame – Nafiza Azad

Fatima lives in the city of Noor, along the Silk Road. The city bears the scars of its recent past, when the Shayateen djinn slaughtered everyone – except Fatima and two other humans. Nowadays, Noor is protected by the Ifrit djinn. But when one of them dies, Fatima is changed in ways she cannot fathom and she is drawn into the intrigues of the maharajah and his sister, the affairs of the djinn, and the dangers of a magical battlefield. This sounds so good, and apparently it’s strongly feminist as well?! I need this! Out on May 14th!

Finn is a talented faceshifter, and she hasn’t seen her own face in years. Which is how she likes it. But when she’s caught by a powerful mobster, she’s forced into an impossible mission: steal a legendary treasure from the royal palace, or lose her magic forever. Prince Alfehr (or Alfie) is first in line for the throne after the murder of his older brother. But his doubts and grief lead him to dabbling in forbidden magic to try and bring his brother back. When Finn and Alfie’s fates collide, they accidentally unlock a terrible power. Together, they must vanquish what they have unleashed, to save the fate of the kingdom. This book is set in a Latinx-inspired world and I can’t wait to read it! Out on May 7th!

Finale is – as you might guess from the title – the final book in a series. And not just any series, but the hugely popular Caraval trilogy. I enjoyed the first book, but wasn’t too fond of the flowery prose and the overload of twists. Which is why I haven’t gotten around to reading Legendary, the second book. Therefore, I also refuse to read the official summary of Finale (gotta avoid those spoilers!). But this might just be the most hyped book of the month, so I can’t *not* mention it, right? And maybe I should use this occasion to pick up Legendary and binge the series… Anyway, Finale is out on May 7th!

This is the sequel to Furyborn, which I read last year. I won’t talk about Kingsbane’s story here, because it would spoil the first book in the series. Furyborn had its issues (which I talked about in my review), but the angels and the Blood and Sun Queens are interesting and I want to know more about them. Out on May 21st!

And we conclude this list with Broken Throne, book 4.5 in the Red Queen series. Again, I enjoyed but didn’t love the first book in the series and haven’t gotten around to reading the rest yet. I’ve heard the series gets better though, so I might still pick them up. Anyway, back to Broken Throne! This isn’t a regular novel, but a companion to the series, meaning it comes with three brand-new novellas, two previously published novellas, maps, flags, bonus scenes and so on. So if you love this series, you’ll adore Broken Throne. Out on May 7th!

Looking for even more new books? Here are all YA releases for May 2019!

And those are all the YA releases for May 2019! Which ones have you set your eyes on? Let me know in the comments below!