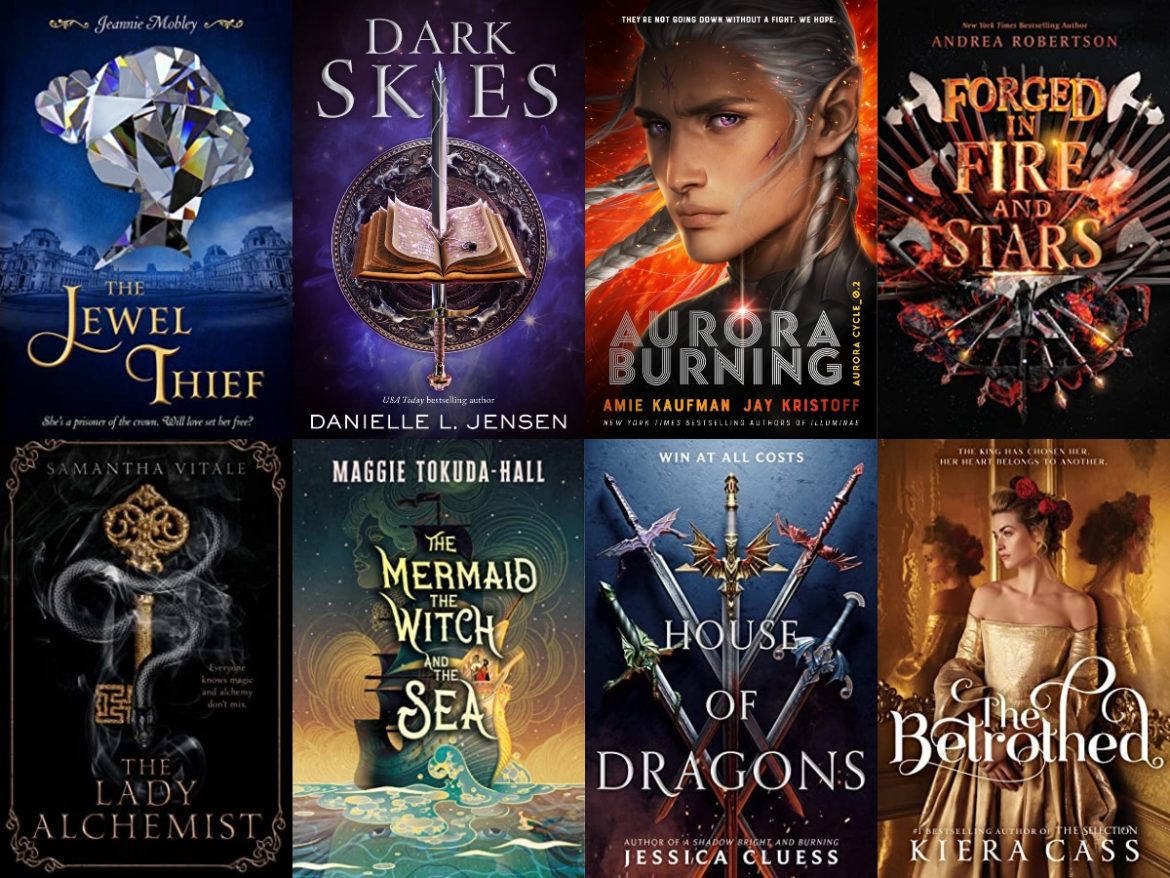 Hi everyone! I hope you’re all safe and well. As I wrote last week, it’s a rough time for the publishing industry. Many upcoming books have been postponed until this is all over, and book sales have plummeted (despite us all being stuck at home). So if you want to support the authors, publishers, and bookstores, now would be a great time to buy some books, if you have the means to do so. Not sure which books to buy? I went through the list of upcoming May 2020 novels and selected 8 I myself am excited about. Note: due to the fact that so many publication dates have been postponed, it is possible this list contains some errors. If you spot a book here that has been delayed, or if you know about a book that is missing from this post: let me know!

Juliet Pitau sits in her cell in the Bastille, charged with stealing the Hope Diamond from King Louis XIV. She has one final chance to convince the King that her motives were pure. Rene, a scribe for the king and the man she loves, is recording her confession, but he won’t even look her way – or forgive her for her betrayal of him. Before she was imprisoned, she was the daughter of the finest gem cutter in all of Paris, who was tasked by the king to cutting the diamond. While he spirals into depression, Juliet takes it upon herself to have the diamond cut for the King. But with every misstep, she brings her family closer to ruin. This book had me at the mention of 17th century France. Add in some sparkly jewels and I’m sold! Out on May 26th!

This is the second book in the Dark Shores series, but it’s not a real sequel to the first book. In fact, it focuses on two different protagonists. Lydia is a scholar in the Empire, but when she meddles in the plots of the most powerful man in the Celendor Empire, her life is in danger. She manages to escape to the far side of the Endless Seas. Here, she meets Killian, Marked by the God of War. He is disgraced after an enemy army invades Mudamora. Lydia and Killian find themselves entangled in a web of political intrigue while danger looms. I got to read an eARC of this book thanks to Netgalley and the publisher. My review will be going online on Friday, but I can already tell you I really enjoyed this! Out on May 5th!

This is the sequel to Aurora Rising, a scifi story in which star pupil Tyler Jones ends up with a squad of losers and misfits. And with Aurora, a girl he rescued from interdimensional space. Now Squad 312 is back to save the galaxy from an ancient evil. I read the first book in the series a few weeks ago (keep an eye out for my review!) and loved it! It was funny and action-packed and full of unexpected twists. So I’m really reaaaaaaallllyyyyyy looking forward to this one! Especially since the cover suggests the story will focus more on Kal, everyone’s favourite Space Legolas. And it promises bank heists! In space! Out on May 5th!

Ara has always known about the legend of the Loresmith, the blacksmith who served alongside kings and queens to protect the kingdom. She was destined to inherit the title until the monarchy’s downfall years ago. But when the lost Princess Nimhea and Prince Eamon steal her away with a mission to retake the throne – and take her place as the Loresmith -, her whole world turns upside down. Ara will discover new truths about her family’s legacy and face the gods themselves. She must use all her skills to figure out who she can trust and forge the right path forward. Out on May 5th!

Sepha is an exceptional alchemist, able to bend the rules in ways no one else can. But then a slip of the tongue lands her in prison with a mountain of straw, and she has to admit she can’t transmute straw into gold. Facing a death sentence, she is forced to make a deal with a magician. She escapes, but now has one year to alchemically create a body for the magician – or else her firstborn child will be his. And that’s not all… How can she save her country when the body she owes the magician will be used to destroy it? This sounds like it might be inspired by Rumplestiltskin and I am so here for that! Out on May 26th!

The Mermaid, the Witch, and the Sea – Maggie Tokuda-Hall

Flora the girl takes on the identity of Florian the man to earn the respect and protection of the crew of the pirate ship Dove. On their voyage, the pirates prepare to sell their unsuspecting passengers into slavery, while Flora is drawn to the Lady Evelyn Hasegawa, who is on her way to a dreaded arranged marriage. Soon, they set in motion a wild escape that will free a captured mermaid and involve the mysterious Pirate Supreme, an opportunistic witch. Look, it has pirates, so I’m all in! Out on May 5th!

When the Emperor dies, the five royal houses of Etrusia attend the Call, where one of their own will be selected to compete for the throne. It is always the oldest child. But this year is different. Five outcasts will answer the call… A liar who must hide her dark magic, a soldier who has sworn to never lift a sword again, a dragon trainer whose skills alone will keep her in the game, the thief who knows he must take what he wants, and the murderer who was born to rule and will stop at nothing to take her throne. How good does that sound?! And how gorgeous is that cover?! Out on May 12th!

Confession time: I have never read The Selection (please don’t hurt me!). But I know those books are hugely popular and now that author Kiera Cass is back with a new series, I am intrigued as well. When King Jameson declares his love for Lady Hollis Brite, she is shocked – and thrilled. After all, she’s grown up at Keresken Castle, vying for the king’s attention alongside other daughters of nobility. But Hollis soon realizes that falling in love with a king and being crowned queen may not be the happily ever after she expected. And when she meets a commoner with the mysterious power to see right into her heart, she finds that the future she really wants is something completely different. Out on May 5th!

Looking for even more books to read? Here’s the (hopefully) complete list of May 2020 novels!

Which May 2020 books are you looking forward to the most? Let me know in the comments below!