New Books I Look Forward To In November 2020 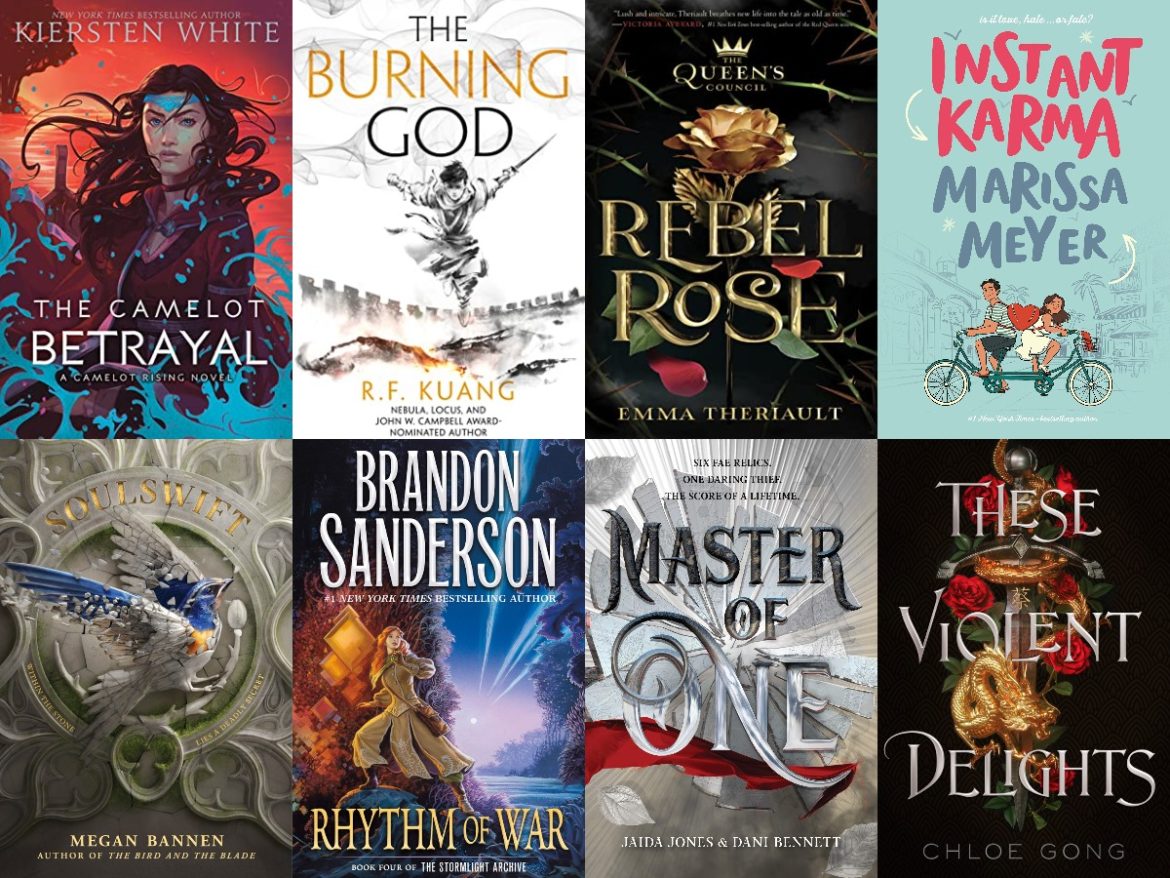 Hi everyone! It’s been a while (again…) since my previous post because I’m all out of energy at the moment. I’m not even in a reading slump right now, I’m just too tired to read. Like, I want to pick up my book, but then I just don’t have the energy to focus on the words. I hope this will improve a bit in the upcoming weeks, but until then, this blog will be less active than before. However, I just couldn’t miss my monthly overview of books I’m looking forward to. So here are the eight books that I’m adding to my ever-growing TBR list in November 2020!

This is the second book in the Camelot Rising series that started with The Guinevere Deception. In that first book, Guinevere has come to Camelot to wed King Arthur. She was sent by Merlin to be his wife and protector from those who want to see the young king’s city fail. But Guinevere isn’t quite who she seems – she is a changeling, a girl who has given up everything to protect Camelot. I haven’t read the first book yet, but I’ve always been fascinated by Arthurian legends and this series is definitely on my list. The Camelot Betrayal is out on November 10th!

So this is ABSOLUTELY not a children’s or even YA book. But I read the first book of the trilogy, The Poppy War, a couple of months ago and was totally blown away by it. It tells the story of Rin, a war orphan, who is allowed into the nation’s most prestigious military academy. There, while targeted by rival classmates for her colour, poverty and gender, Rin discovers she possesses a lethal, unearthly power – the nearly-mythical art of shamanism. This power could sway the tide in the looming conflict with the powerful Federation that threatens to invade. This series is brutal, it’s devastating, it’s heartbreaking, but above all it’s so freaking good. The Burning God, the final book of the trilogy, is out on November 17th!

What happened to Belle after she broke the Enchantress’s curse and restored Beast to his human form? It’s 1789 and France is on the brink of revolution. It’s only a matter of time before the rebellion arrives on their doorstep. When Belle stumbles across a magic mirror that holds a warning, she wants nothing more than to ignore the voice calling her to accept a crown she never desired. But factions of the revolution may already within her own castle. Is Belle ready to embrace her own strength and the magic that ties her to so many female rulers before her – to become the queen she is meant to be? Look, real history mixed with reimagining the Disney Princessess? Count me in! Out on November 10th!

Prudence Daniels is quick to cast judgment on the lazy, rude, and arrogant residents of her coastal town. One day, after a night out with her friends, she wakes up with the ability to cast instant karma on those around her. Pru giddily makes use of the power, punishing everyone from public vandals to karaoke hecklers. But there’s one person on whom her powers consistently backfire: Quint Erickson, her lab-partner and all-around mortal enemy. Soon, Pru begins to uncover truths about Quint, her peers, and even herself that reveal how thin the line is between virtue and vanity, generosity and greed,… and love and hate. This sounds like a such a cute YA contemporary romance, and it’s by the author of the Lunar Chronicles! Out on November 3rd!

Gelya is a Vessel, a girl who channels the word of the One True God through song. Cloistered with the other Vessels, she believes that a saint imprisoned Elath the Great Demon centuries ago, saving humanity from earthly temptation. When Gelya stumbles into a cover-up by the military, she reluctantly teams up with Tavik, an enemy soldier, to survive. Tavik believes that Elath is a mother goddess who must be set free, but while he succeeds in opening Her prison, he inadvertently turns Gelya into Elath’s unwilling human vessel. Now the church that raised Gelya considers her a threat and together with Tavik she must find a way to exorcise Elath’s presence from her body. Will this release stop the countdown to the end of the world, or will it cause earth’s destruction? And what will become of Gelya? This author broke me with The Bird and the Blade, so I’m fully prepared to have my heart shattered again. Out on November 17th!

This is the fourth book in the Stormlight Archive. I haven’t read these books yet, but Brandon Sanderson is one the biggest names in fantasy and I loved not only how he took over the Wheel of Time series from Robert Jordan but also his sci-fi Skyward. This series, that will eventually span ten books, describes a world where the consecrated orders have fallen, but their mystical swords and suits of armor remain and can turn ordinary men into near-invincible warriors. As a fan of epic fantasy, I really should pick up these books! Rhythm of War is out November 17th!

Rags is an excellent thief. He’s stolen into noble’s coffers, picked soldiers’ pockets, and even liberated a ring or two off the fingers of passersby. Until he’s caught by the Queensguard and forced to find an ancient fae relic for a sadistic royal sorcerer. But this relic turns out to be a fae himself – a distractingly handsome, annoyingly perfect, ancient fae prince called Shining Talon. And things are only about to get stranger from there. This is described as “the heist and intrigue of Six of Crows and the dark fairy tale feel of The Cruel Prince”. While I wasn’t crazy about the latter, I am intrigued by the fae. So I’m really curious about this one! Out on November 10th!

1926, Shanghai. A blood feud between two gangs runs the streets red, leaving the city in chaos. At the heart of it all is Juliette Cai, who has returned to assume her role as the proud heir of the Scarlet Gang. Their only rivals are the White Flowers and their heir Roma Montagov – Juliette’s first love… and first betrayal. But when gangsters on both sides show signs of instability, people start to whisper. Of a contagion, a madness. Of a monster in the shadows. Juliette and Roma now must work together to stop this mayhem – or there won’t a city left for either of them to rule. A Romeo and Juliet retelling in Shanghai? Yes please! Out on November 17th!

Looking for even more books to add to your reading list? Here’s the full list of new YA books (and some others) hitting the shelves in November 2020!

What November 2020 books are you most excited about? Let me know in the comments below! And if you spot a mistake (a book that got delayed, or one that’s missing from my list), please drop a comment as well. Stay safe, stay healthy, and happy reading!