New Books I Look Forward To In September 2019 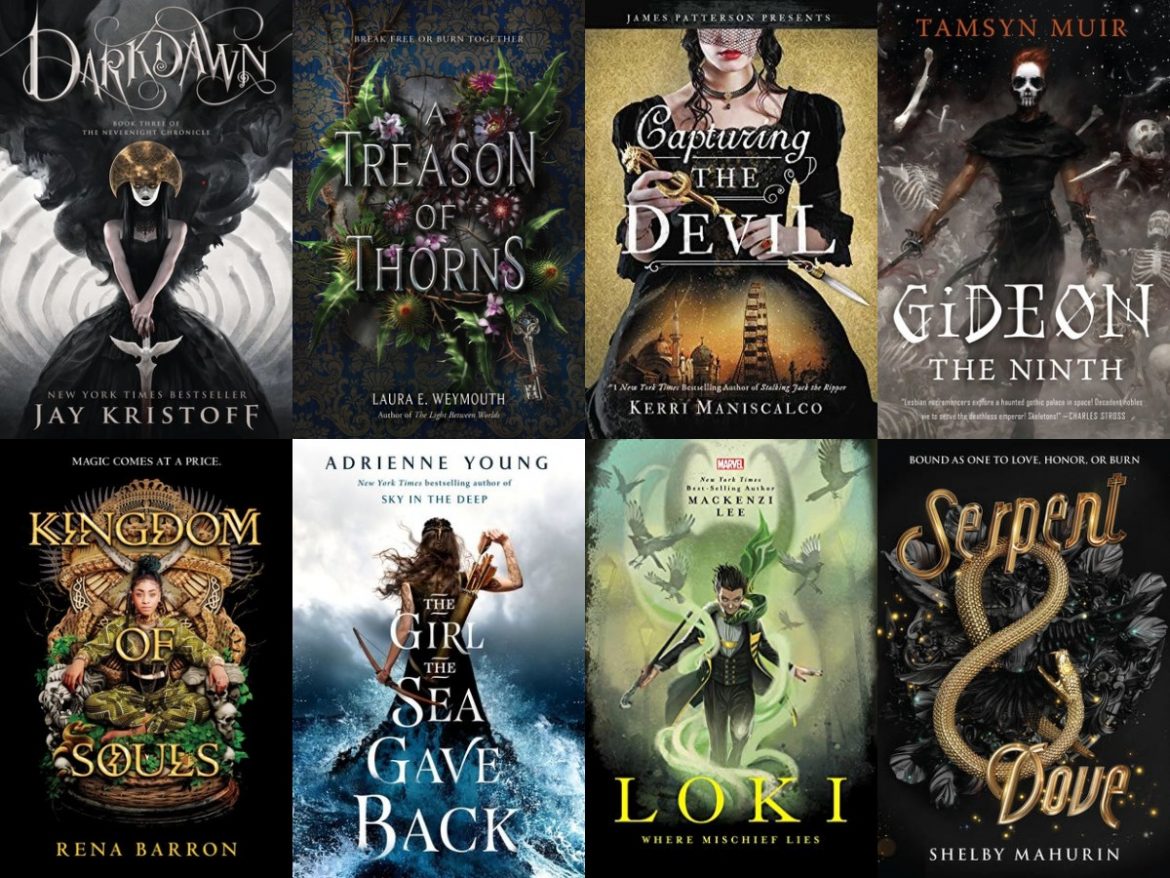 Hi everyone! September is right around the corner and you know what that means: out with the summer heat, it’s time for sweater weather and Halloween decorations! A new month also means a ton of new reading material to look forward to. I went through the lists and selected the 8 books I’m most looking forward to in September 2019!

Let’s start with the one I’m arguably the most excited about. I mean, I’ve only been talking about it for months (sorry to everyone who had to listen). Darkdawn is the epic finale to the Nevernight Chronicles (be sure to check out my reviews for the other books, Nevernight and Godsgrave) and I am both really looking forward to and dreading finding out what happens to Mia, Mr Kindly, Ash, and all those other characters. I have no idea what’s going to happen, other than the fact that Mia’s still out for revenge, so there will be lots of blood. And lots of sarcasm. Warning: this series is not Young Adult! Darkdawn is out on September 3rd!

Violet is the daughter of Burleigh, one of the six great houses of England. Burleigh’s magic always kept the countryside well. But when her father committed high treason trying to free Burleigh from the king’s oppressive control, everything changed. He was killed and Violet was forced into hiding. Now she returns and finds Burleigh has run wild with grief. Violet would do anything to help, but this sets her on the same deadly path as her father all those years before. How far is she willing to go to save her house? The magic sounds so good in this one, as does the dilemma Violet will face! Out on September 10th!

This is the fourth book and finale to the Stalking Jack the Ripper series, of which I read the first and second book (waiting on my book buying ban to end so I can buy the third book). Audrey Rose and Thomas have arrived in America. When they attend the World’s Fair in Chicago, they find reports of missing people and unsolved murders. Of course, the two of them immediately begin their investigations, but the serial killer they soon face is unlike any they’ve heard of before. This series is perfect for the Halloween season. It’s gory, creepy and will keep you glued to the pages all night. Out on September 10th!

Speaking of Halloween… How about a necromancer? Gideon was brought up by unfriendly nuns and is ready to abandon that life of servitude. She packs up her sword and prepares to escape, but her childhood nemesis won’t set her free without a service. Meanwhile, Harrowhark, a bone witch, has been summoned into action. The Emperor has invited the heirs of each of the Houses to a deadly trial. If Harrowhark succeeds, she will become an immortal, all-powerful servant of the Resurrection, but without Gideon’s sword, Harrow will fail. People who got their hands on early copies of this book have been gushing about it for months. And it does sound pretty awesome, right? You could even say it’s to die for! Quick note: like Darkdawn, this is not YA, but aimed at an older audience. Out on September 10th!

Arrah was born into a family of powerful witchdoctors. But each year, she fails to call forth her ancestral powers. There’s only one thing she hasn’t tried: trading years of her own life in return for magic. But then the Kingdom’s children begin to disappear. Desperate to find the culprit, Arrah learns that the Demon King is stirring from his imprisonment. His hunger for souls will bring the world to its knees, unless Arrah pays the price for the magic to stop him. Dark magic, demons and murders? Who can say no to that? Out on September 3rd!

The Girl the Sea Gave Back – Adrienne Young

Tova has lived among the Svell, the people who found her washed ashore. They use her for her gift as a Truthtongue, who can cast the rune stones and see into the future. But when two other clans join forces, danger looms for Tova and the Svell. The leaders of the Svell look to Tova for advice, who sets into motion a series of events that will change everything. This book is a companion novel to Sky in the Deep. It’s set in the same world and at least one of those characters makes an appearance here, but I think you can read this one on its own. In any case, I love Viking-inspired stories, so this goes on my list. Out on September 3rd!

If there’s one thing you should know about me, it’s this: I’m Loki trash. So when I heard about an upcoming novel featuring our favourite villain-who-actually-just-needs-a-hug, I clicked so hard I nearly broke my mouse. Anyway! In this novel, we meet Loki before the whole Avengers stuff goes down. His only ally in Asgard is the sorceress Amora, but when the two of them cause the destruction of one of Asgard’s most prized possessions, Amora is banished to Earth and Loki slips into anguish. But when Asgardian magic is detected in relation to murders on Earth, Odin sends Loki to investigate. Yes, Loki *and* nineteenth-century London. Oh, and Loki is queer (not that that surprises anyone, I guess)! Out on September 3rd!

Two years ago, Louise fled her coven and took shelter in the city of Cesarine, where witches like her are hunted. Reid, sworn to the Church, has always learned not to let a witch live. But then they are forced into marrying each other, in the middle of the war between witches and the Church. Louise soon faces an impossible dilemma. Look, I’m not going to lie. Witches and enemies-to-lovers? This book sounds like it was written just for me. Yes please! Out on September 3rd!

Looking for even more books to read? Here’s the full list of YA releases for September 2019!

Which September 2019 releases are you most excited about? Let me know in the comments!