New books to look forward to in November 2018 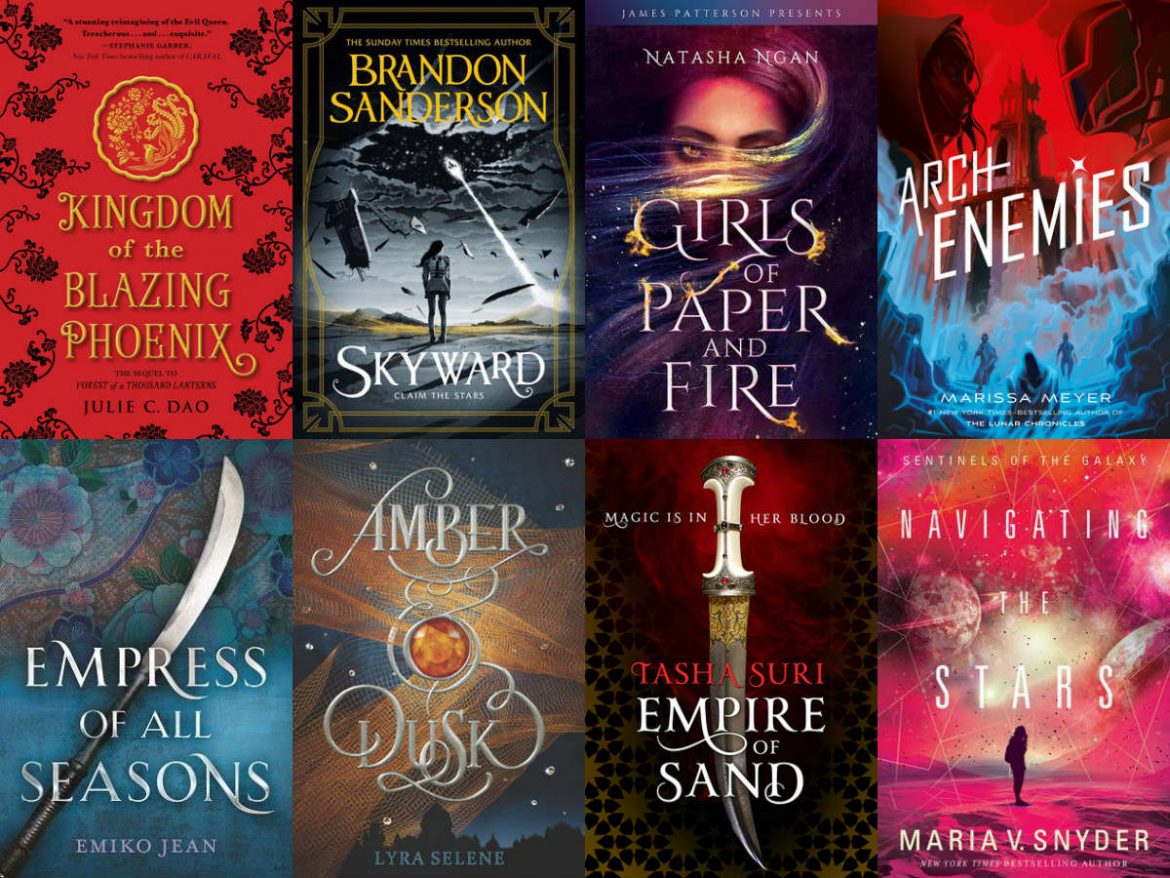 Boooo! Can you believe October is over already? I don’t know about you guys, but I’m getting serious anxiety over my Goodreads reading challenge. I’m 5 books behind on my schedule and I’m afraid I’m not going to make it! I have a huge pile of books to get through, but in case you’re looking for inspiration, here are some of my recommendations from the list of new YA releases for November 2018.

This is the sequel to Forest of a Thousand Lanterns, which was released a year ago. In that book, we witnessed Xifeng’s rise to power. Now, years after those events, she rules as the cruel Empress. Her stepdaughter Jade has grown up in exile, and even though she doesn’t want the throne for herself, Jade knows she is the only one who can stop Xifeng. But will she fall prey to the same weakness that consumed Xifeng? Xifeng was a very flawed heroine, so I’m looking forward to her confrontation with Jade (and I wonder if I’ll like Jade). Out on November 6th!

The human race is nearly extinct and its remnants live on a planet where they are constantly attacked by alien starfighters. Spensa, a teenage girl, longs to be a pilot. When she discovers the wreckage of a ship, she knows this is her chance. I don’t usually read science fiction, but this one seems intriguing. It’s written by Brandon Sanderson, and if that isn’t enough to convince you, maybe the talking (and from what I’ve read, sassy) spaceship catches your attention? Out on November 6th!

Meet Lei, a girl from the Paper caste, the lowest class in Ikhara. Each year, eight girls from this caste are chosen to serve the king. But this year, nine are chosen, and Lei is one of them. During her training in the castle, she falls in love and she gets entangled in an explosive plot that threatens the very foundation of Ikhara. I am super excited about this one! It’s an ownvoices story in an Asian-inspired world, and it features an LGBT romance. It does come with content warnings for violence and sexual abuse, so be aware of that. Out on November 6th!

Archenemies is the second part in the Renegades trilogy, that started last year with the book Renegades (makes sense, right?). I haven’t read that one yet, but it’s a science fiction story about two warring factions. Nova, who hates the Renegades, is on a mission when she meets Adrian, a Renegade boy. In this sequel, the stakes are even higher and these enemies have to work together to save the world. I really loved Marissa Meyer’s Lunar Chronicles series, so I should definitely pick this one up as well. Out on November 6th!

Empress of All Seasons – Emiko Jean

Meet Mari, who has trained all her life to compete to become the new empress. She is ready to survive the palace’s enchanted seasonal rooms, but she has a dangerous secret. For Mari is a yokai, who can transform into a terrifying monster. And the emperor wants to enslave and destroy all yokai. Her fate collides with that of Taro, the prince who has no desire to sit on the imperial throne, and Akira, a half-human, half-yokai outcast. I love kickass protagonists, so I can’t wait to get my hands on this one. Out on November 6th!

Sylvie, who grew up in the permanent twilight of the Dusklands, has the power to create illusions. A curse, according to her guardians, but she knows it gives her a place in the imperial palace in Amber City. The empress invites her in, but only as part of a wager with her courtiers, and Sylvie has to assume a new name, Mirage. Can she navigate the deadly intrigue and twisted social circles to claim her spot? As you know, I’m a sucker for backstabbing and intrigue, so you can imagine my excitement about this one. Out on November 27th!

In this Mughal India-inspired story, the Amrithi are outcasts, coveted and persecuted for the power in their blood. Mehr is the illegitimate daughter of an imperial governor and an exiled Amrithi woman, whose magic she has inherited. When the Emperor’s most feared mystics notice her power, Mehr must do all she can to resist them and their plans. From what I gather, this is actually an adult fantasy, but fans of YA will enjoy it as well. Out on November 13th!

And finally we have another science fiction story. I wanted to include this one because it’s written by Maria V. Snyder, whose Poison Study I absolutely loved. Lyra Daniel’s parents are archaeological Experts and they drag their daughter to various planets to study the mysterious Terra Cotta Warriors that have been discovered throughout the Galaxy. When one of the planets goes silent and Lyra’s research base is attacked, she becomes involved in discovering why the Warriors were placed on these plants. And by who. Out on November 19th!

Looking for even more new books? Here is the full list of November 2018 Young Adult releases!