New books to look forward to in May 2018 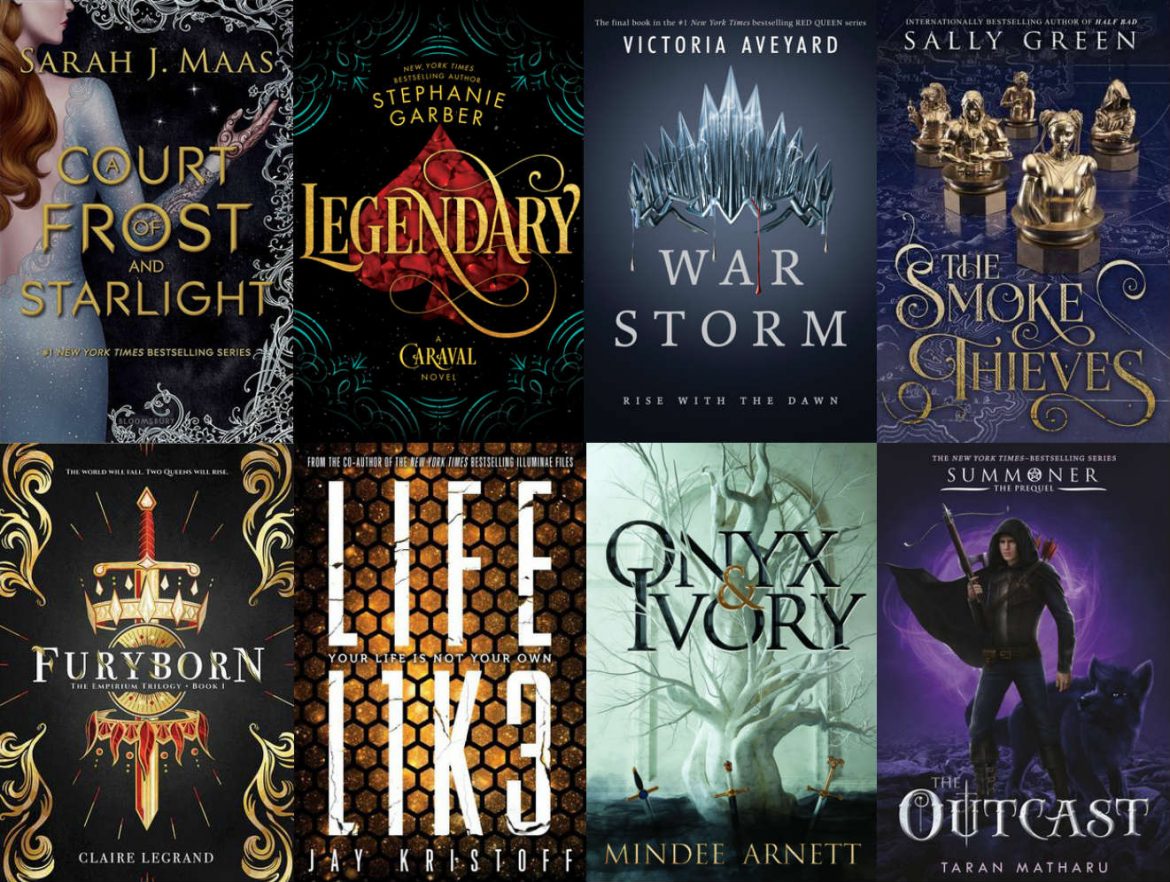 Every week new books hit the shelves in bookstores and libraries around the world. Deciding which ones to read can be hard. But don’t panic, I’m here to help! Below are some of the hottest Young Adult books you can expect in May 2018.

A Court Of Frost And Starlight – Sarah J. Maas

The month gets off to a great start with this release. A Court of Frost And Starlight is part 3.1 in the Court Of Thorns And Roses series by Sarah J. Maas. After the original trilogy ended with A Court Of Wings And Ruin, we get a companion novel that is set after the events of that book. With 224 pages in the hardcover edition it isn’t exactly a big book, but for fans of Feyre and Rhysand this novella is a must-have.

Another fantasy novel I’m looking forward to. The blurb mentions “a princess, a traitor, a hunter and a thief. Four teenagers with the fate of the world in their hands. Four nations destined for conflict.” This sounds like the start of an epic series with the right ingredients to get me hooked. The Smoke Thieves hits the shelves on May 1st.

Legendary is the sequel to Caraval, Stephanie Garber’s debut that was published last year. While the first novel was told from Scarlett’s point of view, we now follow Donatella’s adventures as she once again takes part in Caraval. Her mission: to deliver the mysterious Legend’s true name to the criminal with whom she struck a bargain. I can’t wait to find out more about Legend’s identity, so I might order this one when it’s released on May 29th!

This is the 4th and final part in the Red Queen series by Victoria Aveyard. It’s about Mare Barrow, a Red commoner who finds herself entangled in the web of intrigues at the royal court of the Silver elite. I have to admit I haven’t read this series yet, but I’ve heard so much about it. Side note: I love how the covers started out bright and then with each book turned darker. Out on May 15th!

On May 22th you can find Furyborn in your local bookstore, the first book in a new fantasy series. We follow Rielle, who has to prove her magic makes her the Sun Queen, and Eliana, who lives 1000 years after Rielle and who joins a rebel captain. I have an ARC of this book on my shelf, but haven’t read it yet. But I hope to get to it before Furyborn is released on May 22nd.

Kate, the daughter of a traitor, works for the imperial courier service. But she has a secret: she is a wilder, who can influence the minds of animals. When nightdrakes, creatures that should only be able to come out at night, attack a caravan in broad daylight, she has to face her past. For there are greater evils stirring in the kingdom. I’m so looking forward to reading this beauty that is published on May 15th.

The first book I read by Jay Kristoff was Nevernight, a fantasy novel about a school of assassins. You might also know him from the Illuminae Files, a trilogy set in space. With LIFEL1K3 Kristoff again chooses for a science fiction story, this time on a floating junkyard slash post-apocalyptic USA. I don’t usually read sci-fi, but for Jay Kristoff I might make an exception. This one is released on May 29th.

Like the Red Queen series, the Summoner books have been on my TBR list for quite some time. I should probably make some time to read this series about blacksmith apprentice Fletcher who discovers he can summon demons. The Outcast is the fourth book to be released in this series, but it’s a prequel about the first commoner to summon demons. So it should be possible to start the Summoner series by reading this book first. If you’re interested, run to your local bookstore on May 3rd!