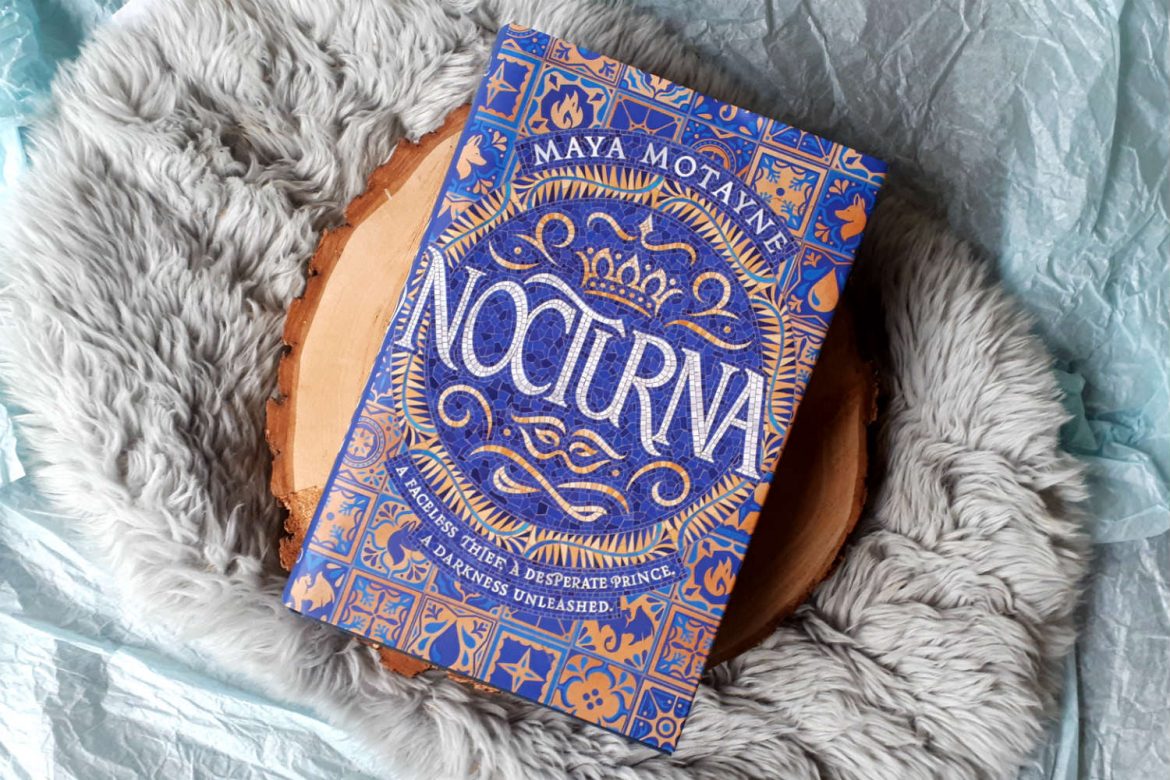 Hi everyone! Another week is almost over, so it’s time to think about what books we’ll be reading over the weekend. Got any interesting titles ready on your nightstand? Let me know below! I myself am hoping to get a lot of reading time, since I’m once again behind on my reading challenge. Maybe I should put aside the big books for a while and read shorter ones. Speaking of big books, I recently read Nocturna by Maya Motayne. I love the cover of this book (look at my blue Fairyloot edition, compared to the original red one you can see below!), but what did I think of the story? Read on to find out!

When Finn, a talented faceshifter, is captured by a mob boss, she is forced into an impossible mission: to steal a legendary treasure from Castellan’s royal palace, or she’ll lose her magic forever. Prince Alfehr is first in line for the throne after the murder of his brother, but he is riddled with grief and is desperate to find a way to bring his brother back, even if it means dabbling with forbidden magic. When Finn and Alfie’s fates collide, they accidentally unlock a terrible power that could devour the world. Now they must work together to save Castellan.

“Yay,‌ ‌a‌ ‌latinx‌ ‌fantasy!”,‌ ‌I‌ ‌thought‌ upon‌ ‌discovering‌ ‌this‌ ‌book.‌ As I’ve mentioned before, I’ve read quite a few Asian-inspired fantasy novels, but latinx? Not so much. Nocturna seemed like the perfect book to fill that gap. Unfortunately, mentioning tequila, sangria and pesos just isn’t enough to give your world a true latinx feel… Neither is having a character say “maldito” every 5 seconds, or having your magic spells just be the Spanish word for whatever they’re trying to do.

Look, I liked the two protagonists. Finn was fierce and Alfie (kind of a cringeworthy nickname though, to be honest) was adorable. I also enjoyed seeing these different characters with different backgrounds and personalities learn from one another.

But the rest of the world? That clearly suffered from a lack of world building, as did the other characters. I was also a bit confused about the magic. There were two different types of magic, apparently? The “general” magic that involved being able to open doors and stuff, and the “special” magic that was unique to each person (Finn’s ability to faceshift, for example). I think? I’m just not sure how it all works…

If I’m not mistaken, this is going to be a series. But this book also works as a standalone. So I’m not sure whether the next books will feature the same protagonists or we’ll get new characters in the same world…? In any case, we’ll definitely need more world building in the next installment.

Oh, and one final note: apparently the story of Nocturna is very similar to A Darker Shade of Magic by V.E. Schwab. Personally, I haven’t read that series yet, but I’ve seen a number of other reviewers mention this fact. Since ADSOM is high on my TBR list, I’m not going to look up what the similarities are exactly, but yeah, I wanted to mention this to you.

Set in a Latinx-inspired world, a face-changing thief and a risk-taking prince must team up to defeat a powerful evil they accidentally unleashed.

To Finn Voy, magic is two things: a knife to hold under the chin of anyone who crosses her…and a disguise she shrugs on as easily as others pull on cloaks.

As a talented faceshifter, it’s been years since Finn has seen her own face, and that’s exactly how she likes it. But when Finn gets caught by a powerful mobster, she’s forced into an impossible mission: steal a legendary treasure from Castallan’s royal palace or be stripped of her magic forever.

After the murder of his older brother, Prince Alfehr is first in line for the Castallan throne. But Alfie can’t help but feel that he will never live up to his brother’s legacy. Riddled with grief, Alfie is obsessed with finding a way to bring his brother back, even if it means dabbling in forbidden magic.

But when Finn and Alfie’s fates collide, they accidentally unlock a terrible, ancient power—which, if not contained, will devour the world. And with Castallan’s fate in their hands, Alfie and Finn must race to vanquish what they have unleashed, even if it means facing the deepest darkness in their pasts.