Traversing Chapters > Reviews > Rebel of the Sands – Gunshots in the desert

Rebel of the Sands – Gunshots in the desert 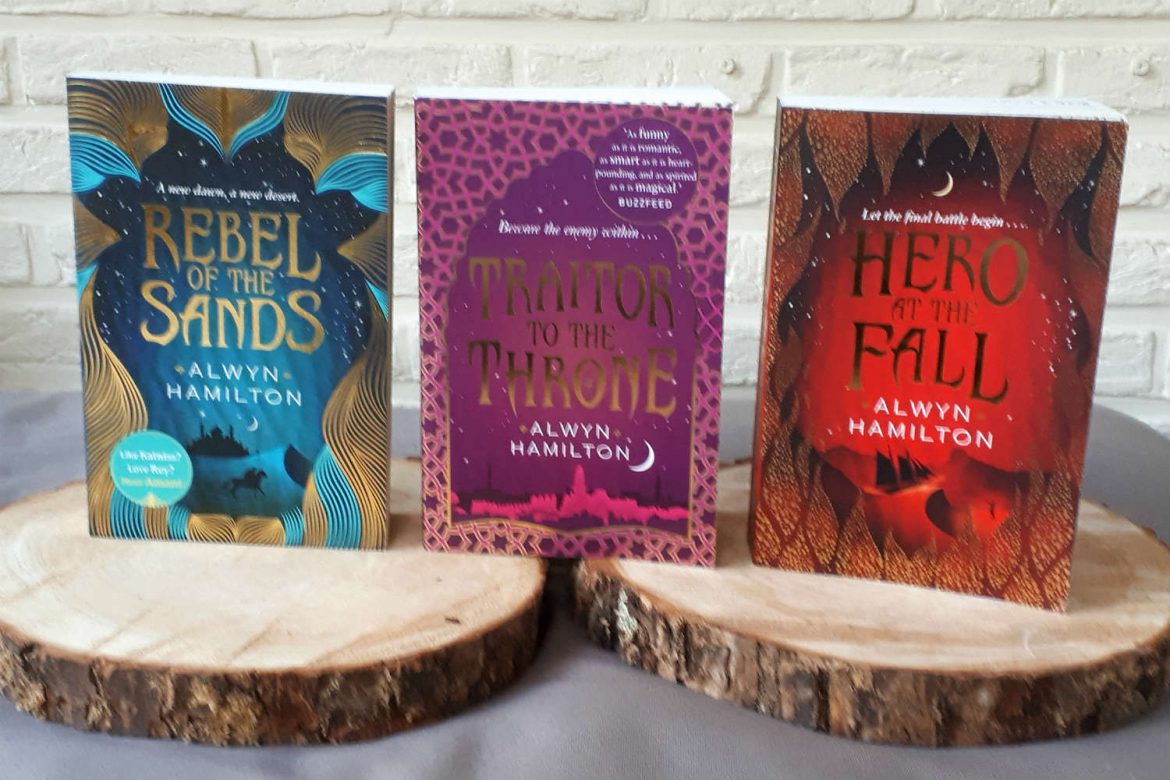 Let me start this review with a little story. About a year ago, I went to a book fair and there was this gorgeous cover that caught my eye: it was blue with gold, and it had a Arabian palace and a rider on horseback on it. I like to think I don’t judge a book by its cover, but I’ll confess this beautiful design made me pick it up. This book was Rebel of the Sands, by Alwyn Hamilton. I got home and started reading it. I liked it a lot, but for some reason, I never got around to buying the second and third parts of the trilogy. Until a few weeks ago. So here we are, with a review of this full series!

As you might expect from the cover, the story is set in a world inspired by the Arabian desert. But there’s more, because there are also some influences of the Wild West. So expect gun fights! In fact, our protagonist is Amani, a young woman growing up in a small village, who knows how to handle a gun. Her life is turned upside down when she meets Jin, a mysterious (and handsome) stranger. Together they embark on a journey across the desert that leads Amani to places she never expected to see.

I’m not going to go into much detail about the plot here, because that would spoil the fun for you. But I can tell you there’s a rebellion against the Sultan, and a lot of magic. You see, this isn’t just any desert, but the domain of the powerful Djinn (think Genie from Aladdin, only more devious and definitely not as funny). The magic is on the light side in the first book, but in the second and third book it grows more important.

In fact, I felt like the first and second book were totally different stories. While the first was an adventure across the desert, the second book was mainly set in the palace of the Sultan and had less action but more intrigue. I’m not saying I prefer one over the other, to be clear. They were just very different story-wise.

Since it’s been so long since I read Rebel of the Sands, I don’t really remember how I reacted to the many plot twists. But I can guarantee you that I didn’t see them coming in Traitor to the Throne and Hero at the Fall. Hamilton regularly took me by surprise and had me frantically reading on to find out what was happening.

Oh, and be prepared to cry. Seriously, this author is not afraid to kill off characters. I didn’t count them all, but the death count is pretty high in this series. Some were evil characters that I was glad to see the last of, but others… Why must you do this to me, miss Hamilton?! There were times I just sat here, staring into the distance, mourning a fictional character. The little interludes in which the stories of these newly deceased characters were told, were so beautiful and touching. I’m not someone who tends to cry while reading, but here I had to fight the tears a few times.

I had one major issue with this series though, mainly with the third book. We spent two books setting up the conflict, moving the chess pieces to their positions on the board… and then the finale fell a bit flat. The third book has a lower page count than the second one, which I found a bit odd before I started reading. And behold, the finale felt rushed. After everything our heroes went through in the first and second book, here it all was *so easy*. There’s a lot happening in this third book, Amani travels across the entire desert. And yes, a few characters meet an early (and painful) end, but never *before* they do whatever Amani/the plot needed them for.

That’s why I can’t give the Rebel of the Sands series the full five stars. Don’t get me wrong, it’s a fun trilogy with a creative setting and I loved the characters. But the story, while interesting and captivating, didn’t quite fulfill my expectations.

The New York Times bestselling novel by the Goodreads Choice Awards Best Debut Author of 2016, published in 15 countries! Mortals rule the desert nation of Miraji, but mythical beasts still roam the wild and remote areas, and rumor has it that somewhere, djinn still perform their magic. For humans, it’s an unforgiving place, especially if you’re poor, orphaned, or female. Amani Al’Hiza is all three. She’s a gifted gunslinger with perfect aim, but she can’t shoot her way out of Dustwalk, the back-country town where she’s destined to wind up wed or dead. Then she meets Jin, a rakish foreigner, in a shooting contest, and sees him as the perfect escape route. But though she’s spent years dreaming of leaving Dustwalk, she never imagined she’d gallop away on mythical horse—or that it would take a foreign fugitive to show her the heart of the desert she thought she knew. This startlingly original Middle-East-meets-Wild-West fantasy reveals what happens when a dream deferred explodes—in the fires of rebellion, of romantic passion, and the all-consuming inferno of a girl finally embracing her power.