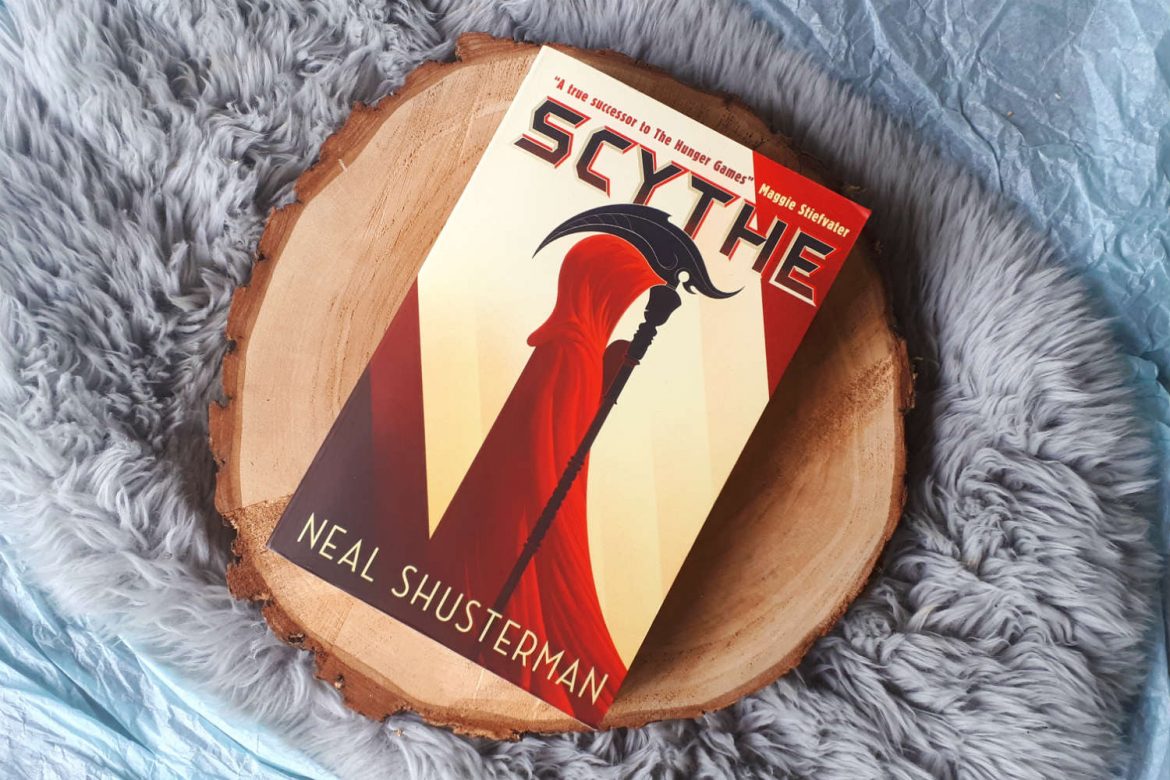 Happy Friday the 13th! Stay away from ladders and don’t let black cats cross your path. In fact, it might be better to just stay inside and read a book. And why not pick up Scythe by Neal Shusterman, a story of people who decide on life and death?

Society has reached its ultimate goal: it has defeated death. No one dies because of old age, disease or accidents anymore. To prevent overpopulation, Scythes are mandated to kill people, which is called gleaning. Two teenagers, Citra and Rowan, are selected by Scythe Faraday to become his apprentices. While they struggle with the fact that they are to become licensed killers, they get even worse news: only one of them can become a Scythe and will have to glean the other…

I enjoyed this so much! Which is probably a weird thing to say about a book about people with a license to kill and their apprentices… Anyway! Don’t expect an action-packed book. A lot of time is spent on Citra and Rowan learning about their new “job”, and the moral conflicts they face: how do you decide who to glean and who gets to live to see another day? So while this book is low on action that gets your heart racing, it never gets boring.

In between Citra and Rowan’s chapters, we also get snippets from other Scythes’ diaries. These provide an interesting look at how we arrived at this point in history. And some interesting points are raised, like how much of our lives, ambitions and even art are inspired by our inevitable death. In the world of Scythe, the chance of being gleaned is pretty low, so people have lost the urge to leave a mark on the world. So while this reality is a utopia at first look, I don’t think it would be such a great way to live…?

“So this book is a super serious novel”, you ask? Haha, hell no! There is a lot of humour, actually. Not of the slapstick variety though. Most of the humour is more subtle, with conversations or observations that bring a smile to your face.

Oh, and as a fan of Easter eggs, I had a blast. Scythes take their names from famous people in history: Faraday, Curie, Xenocrates, and so on. Some of these historical figures I knew, others I had to look up. Not that you need to do so to enjoy this book, by the way. I just loving learning new things. Other Easter eggs include Scythe Curie’s home, which might ring a bell if you know something about architecture.

So let’s talk about the main characters now. In my eyes, Rowan had the more interesting storyline in this first book and I am really curious to see what he does next. But I also loved Citra a lot. While her storyline might not have been as intriguing as Rowan’s, it was still fascinating to see how she adapted to her new position. There was some romance between these two characters. And while I felt it wasn’t necessary and wasn’t well developed either, it also didn’t really bother me.

Scythe is such an easy read and it was over before I knew. Luckily, the sequel Thunderhead was published last year. And The Toll, the finale of this trilogy, is coming to a bookstore near you in November. These two books are near the top of my shopping list for when my book buying ban ends, because Scythe was so addictive and I need more of it! So yeah, this is an obvious 5 stars!

A world with no hunger, no disease, no war, no misery. Humanity has conquered all those things, and has even conquered death. Now scythes are the only ones who can end life—and they are commanded to do so, in order to keep the size of the population under control.

Citra and Rowan are chosen to apprentice to a scythe—a role that neither wants. These teens must master the “art” of taking life, knowing that the consequence of failure could mean losing their own.