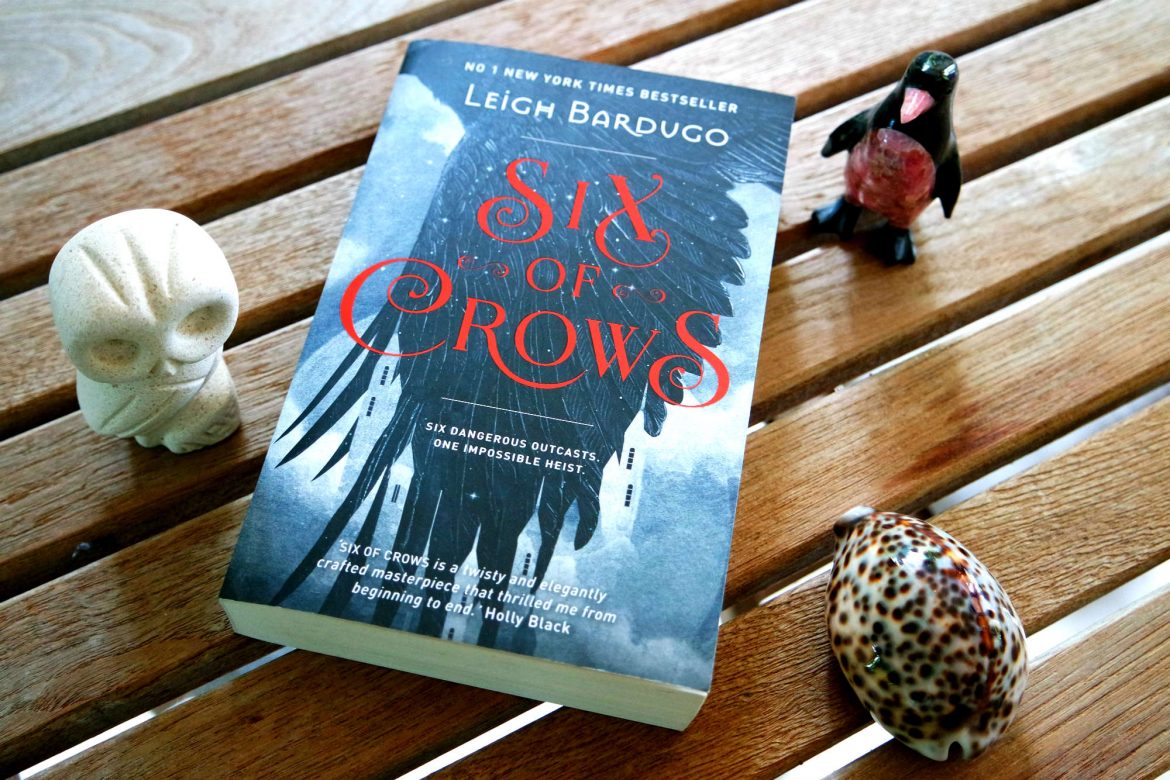 Which book should I review first? That thought had me looking at my Goodreads-shelves and my actual bookshelf. I decided to go for one of the best books I read this past year: Six of Crows by Leigh Bardugo, a sweeping tale of 6 unlikely heroes with complicated backgrounds and tons of action.

You might know Bardugo from her Grisha-trilogy, set in an alternative version of Russia. Six of Crows in set in the same universe, but this time in Ketterdam, an alternative Netherlands. In the dark alleys of the city we meet our main characters, a gang of thieves and convicts. They have to break into the Ice Court – a stronghold/maximum security prison that has never been breached – and retrieve a prisoner.

Bardugo does a great job creating a diverse cast with personal conflicts. There is Kaz, the prodigy thief and leader of the mission; Inej, the lethal acrobat; the big-mouthed Jesper, and so on. They not only struggle with their own dark pasts, but also with their relationships.

The story is told in 3rd person and it switches between these characters. Meaning we get a glimpse of their thoughts and feelings, without revealing everything. This keeps you guessing until the end. Especially Kaz is intriguing as the ultimate anti-hero and I wanted to say I like him best, but then I realized I love all these characters to bits. Every chapter made me go “yay, Inej’s POV… yay, Nina’s POV”, and so on.

It’s a quite dark story, as you might have guessed from the whole “6 criminals with troubled pasts on a dangerous mission”-set-up. Don’t expect a fun adventure. And although there is some romance, it never takes center stage. The ending is also not exactly a happy one and had me craving for more.

One final note: I read this book after reading the Grisha-trilogy. While you might be able to understand what is going on in Six of Crows without reading those books, I would recommend to at least look up what Grisha are and what they do. Otherwise their magic might get a bit confusing.

All in all, this was a great book, with awesome characters. If you like the idea of Ocean’s Eleven in a young adult fantasy setting, then this one is for you. There was however a bit of a slump in the middle, killing the pace. That’s why I can’t give this book the full 5 stars, but it wasn’t far off.

Ketterdam: a bustling hub of international trade where anything can be had for the right price--and no one knows that better than criminal prodigy Kaz Brekker. Kaz is offered a chance at a deadly heist that could make him rich beyond his wildest dreams. But he can't pull it off alone... A convict with a thirst for revenge. A sharpshooter who can't walk away from a wager. A runaway with a privileged past. A spy known as the Wraith. A Heartrender using her magic to survive the slums. A thief with a gift for unlikely escapes. Six dangerous outcasts. One impossible heist. Kaz's crew is the only thing that might stand between the world and destruction-if they don't kill each other first.