Sky in the Deep – Finding Your Family in the Fjords 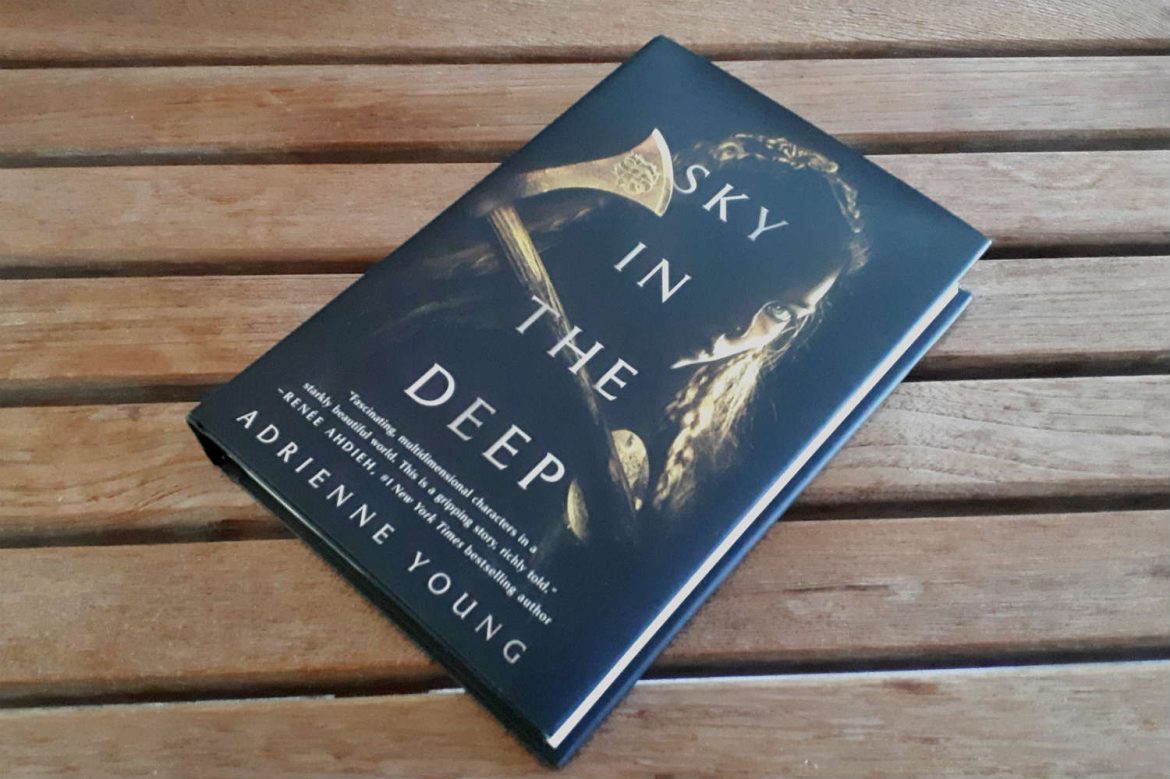 There is a quote by Toni Morrison that I think about a lot. “If there’s a book that you want to read, but it hasn’t been written yet, then you must write it”, it says. I’ve used it to encourage myself to start writing more. But Sky in the Deep comes close to this mythical and perfect book that I want to read. I’m sure this has made you curious, so let’s have a look at what I thought of this book!

Eelyn is a warrior in her Aska clan. Every five years, they gather for a battle against their rival clan, the Riki. But on the battlefield, she sees something that is impossible. Her brother Iri, who she watched die five years ago. He’s not only alive and well, but fighting alongside the Riki. During the battle, Eelyn is captured and she now has to spend the winter in the Riki village, with the family that took in Iri as their own son.

As I’ve said before, I LOVE LOVE LOVE Viking stories! I think these characters aren’t really Vikings though, I feel like Sky in the Deep is set in a fictional world and they have their own gods they worship. But their culture and the environment are clearly inspired by the Norsemen and Norway.

Speaking of culture, the book starts with a battle scene and later on in the story there’s more action (especially in the finale). But be prepared for a middle section that is more domestic. Eelyn, captured and having to work as a servant, helps Iri’s adoptive family with cooking, gathering plants, mending clothes, and so on. I loved it, it gave us a chance to get to know the members of the family. But if you’re looking for a book that is filled to the brim with clashing axes, this is probably not for you.

As you might expect, Eelyn and her brother have a strained relationship. She feels like he has betrayed their clan and has sided with the enemy. But as times moves on, she learns that these Riki aren’t so different from the Aska after all. I enjoyed seeing this realisation slowly dawn on Eelyn. It’s not an original idea, but I love seeing people’s perceptions about “The Other” being challenged. We all need to understand and love each other some more, yo!

And this will surprise exactly no one, but there is also a romance plotline. Eelyn and her captor/her brother’s best friend Fiske start off disliking and distrusting each other, but slowly grow closer together. And when a threat appears to both of their clans, they have to combine forces to save the people they love.

I’m such a big sucker for hate-to-love, so this romance made me happy! And I love how Fiske was actually a nice guy. Yes, he was the one who captured her and he shot her with an arrow, but after that, he treated her with respect (wow, that sounds weird, but it’s true!). The only thing I missed a little bit, was insight in his mind. Not that I wanted chapters from his POV, but the middle section of the book focused more on his mother Inge and his little brother Halvard. So him and Eelyn developing romantic feelings for each other felt a bit sudden. I wanted more interactions between them.

One final note: Sky in the Deep is a standalone. While I love immersing myself in intricate worlds and multi-book series, it’s also great to read a story that is wrapped up in one book. Adrienne Young’s next book will be a companion novel set in the same world. I suppose it might have a cameo by Eelyn and Fiske…?

So in summary: Sky in the Deep has many of my favourite things. Vikings, enemies-to-lovers romance that is also a slow-burn, a few exciting fight scenes and great character development for the main character. It’s not perfect though (I wanted to see more of Fiske), but deserves 5 stars nonetheless.

Raised to be a warrior, seventeen-year-old Eelyn fights alongside her Aska clansmen in an ancient rivalry against the Riki clan, but when faced with her brother's betrayal, and driven by a growing love for her brother's friend Fiske, she attempts to unite the two clans.