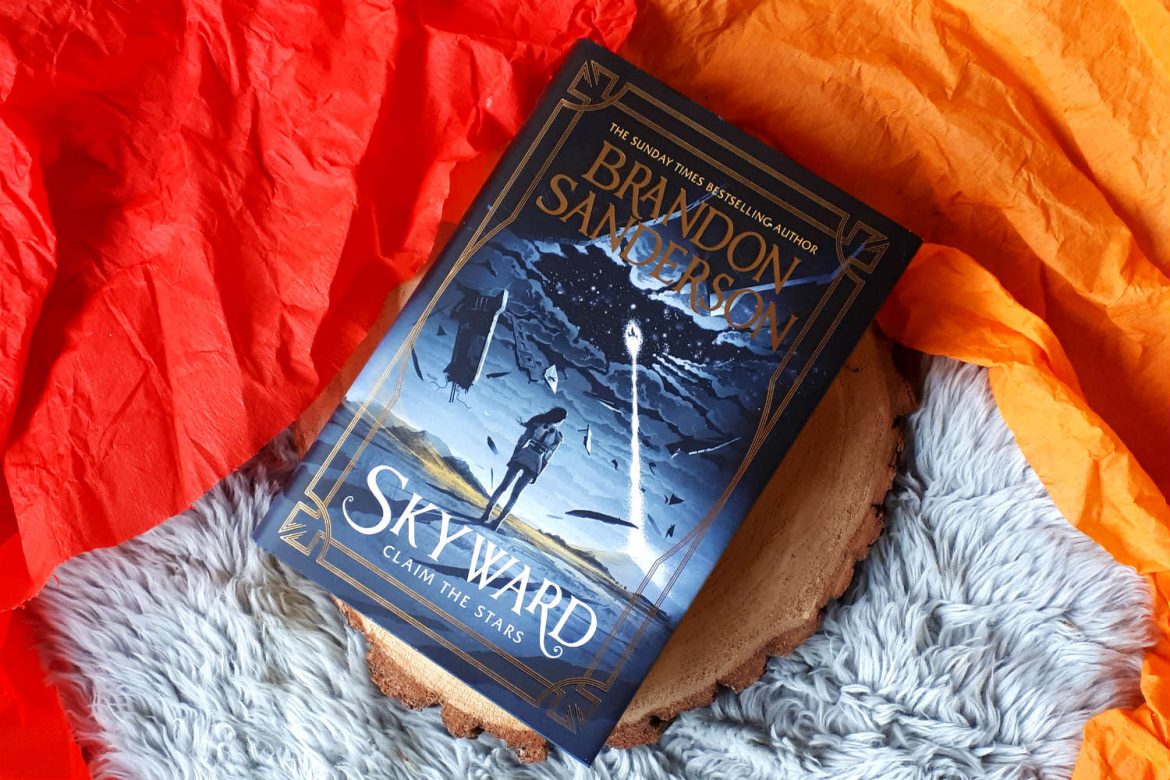 While I’m a big fantasy geek, I’m not too crazy about science fiction. I prefer dragons and elves over spaceships and martians. But Skyward by Brandon Sanderson promised us a talking spaceship and that sounded fun. And so it happened that soon after I received this book in my Fairyloot box, I curled up in bed with this behemoth. (Seriously, it’s massive!)

In Skyward, we meet Spensa, a girl living underground on the planet Detritus. In fact, the entire society lives in an extended cave system after landing here with their fleet a few decades ago. The people live in constant fear of attacks by mysterious alien starfighters. During one of those attacks, Spensa’s father turned traitor and abandoned his flightmates. Now, Spensa has to live with the constant shame of being a traitor’s daughter.

Against all odds, she is allowed to enter flight school. But that is by no means the end of her problems. Learning how to fly a spaceship, as it turns out, is the least complicated part of her training. And when she discovers the wreckage of an abandoned spaceship in a cave, this leaves her with more questions. Because this ship appears to have a soul.

This was the first “real” Brandon Sanderson book I’ve read. I read The Wheel of Time series, which he took over after Robert Jordan passed away, but it’s hard to say how much of those books are his style. While this was my first book, I know it’s not going to be my last. Because I had so much fun reading this!

There are spaceships and thrilling dogfights, but what really made this book shine, were the characters. Spensa grew so much in this story. At first she was angry at everything and everyone, but she soon started realizing that not all things are as black-or-white as she used to think. I also adored her classmates and instructor, but the one character who stood out most of all, was M-Bot, the talking spaceship! He reminded me a bit of Toothless from How to Train Your Dragon and made me laugh out loud a few times.

The story itself had a nice pace. This book is 500 pages long, but I flew through it at the speed of light. If I had to name one negative point of Skyward, it’s the dogfighting. I was often a bit confused during these scenes, especially about the manoeuvres these spaceships performed. But that might just be me. Other than that, I loved the twist at the end and I can’t wait to find out more!

And beyond the characters and story, there was an interesting theme: what makes someone a coward or a hero? Does being afraid of danger make you a coward? Are heroes always fearless? I love books that make me think about these kinds of questions.

To sum things up, I loved Skyward so much! It had a fun story, great characters, it made me laugh, it made me cry, and it made me think. And isn’t that the definition of a great book? Now I just have to find a way to make the time go faster until November 2019, when the second part in this series, Starsight, is released!

Spensa's world has been under attack for hundreds of years. An alien race called the Krell leads onslaught after onslaught from the sky in a never-ending campaign to destroy humankind. Humanity's only defense is to take to their ships and fight the enemy in the skies. Pilots have become the heroes of what's left of the human race. Spensa has always dreamed of being one of them; of soaring above Earth and proving her bravery. But her fate is intertwined with her father's - a pilot who was killed years ago when he abruptly deserted his team, placing Spensa's chances of attending flight school somewhere between slim and none. No one will let Spensa forget what her father did, but she is still determined to fly. And the Krell just made that a possibility. They've doubled their fleet, making Spensa's world twice as dangerous . . . but their desperation to survive might just take her skyward . . . Praise for Brandon Sanderson's #1 New York Times Bestselling Reckoners series: 'Another win for Sanderson . . . he's simply a brilliant writer' Patrick Rothfuss 'Action-packed' EW.com 'Compelling . . . Sanderson uses plot twists that he teases enough for readers to pick up on to distract from the more dramatic reveals he has in store' AV Club