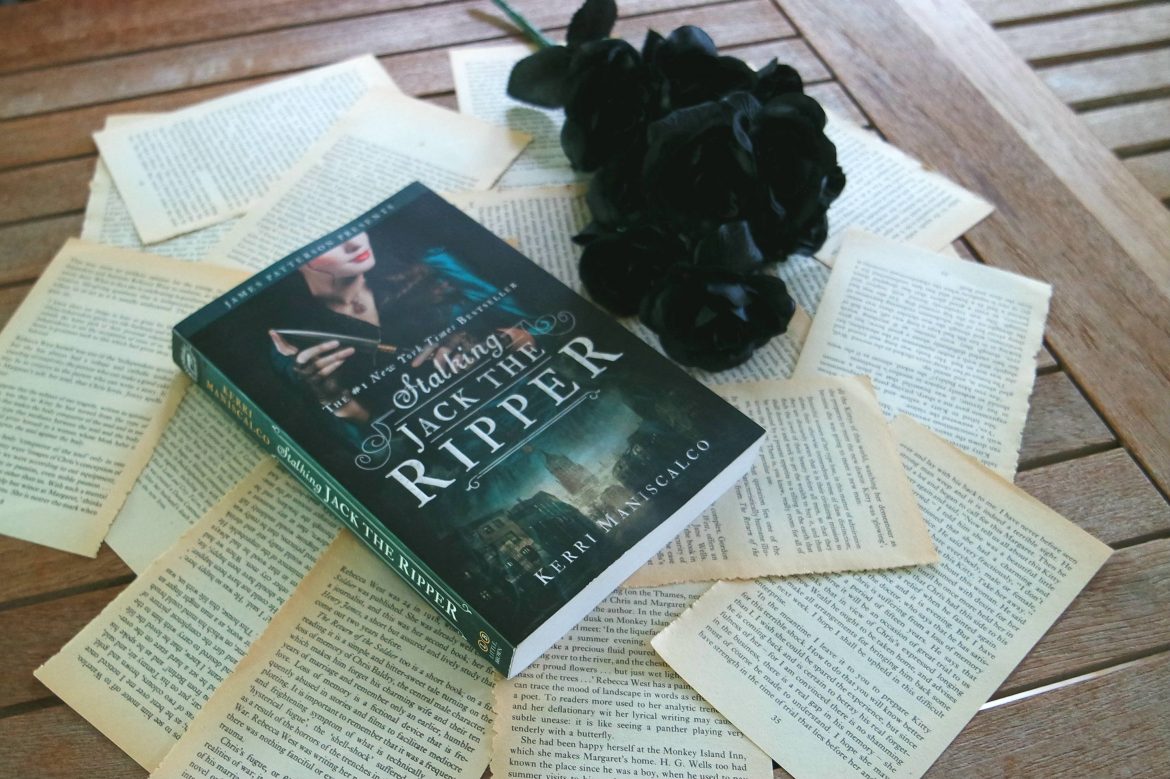 Is there a better way to get in the mood for Halloween than by reading about a serial killer in the Victorian era? I don’t think so, which is why I curled up with a blanket and Stalking Jack the Ripper, by Kerri Maniscalco.

Our main character is Audrey Rose Wadsworth, a young woman who prefers studying the human body over chatting with other ladies. Together with her uncle and the insufferable Thomas Cresswell she finds herself investigating the Whitechapel murders, committed by our famous killer.

The cover immediately caught my attention, it looks so pretty and mysterious! Inside, there are old pictures of London, which help set up the scene. One warning: there are 2 photographs you might find a bit disturbing, depending on how sensitive you are for these things. They’re in black and white, and they’re not too gory or anything. But if you’re unaware and you turn the page, you might get a bad surprise.

Echoes of the classics

Back to the story then! Audrey Rose is a typical YA heroine. She isn’t interested in most girly things (except fashion, she loves pretty clothes) and has very modern opinions for a woman in the late 19th century. But that didn’t bother me at all. And I loved her banter with Thomas, who is himself an interesting character. He’s incredibly sassy and reminds me a bit of Sherlock (the Benedict Cumberbatch incarnation).

The story of course is about finding Jack the Ripper. Unfortunately, I figured out who the killer was by chapter 5 or so. I’m not going to talk about this too much, but I blame Midsomer Murders for seeing through the plot twists!

But even though I knew who the Ripper was, the finale was still intense. His motives were incredibly gruesome. Having a lively imagination isn’t exactly a good thing with scenes like that. Again, I can’t go into much details without spoiling it, but it was an homage to another classic novel. It actually gave me nightmares (confession: I’m not that brave when it comes to scary stories, so I brought that on to myself, woops).

All thing considered, I’m giving Stalking Jack the Ripper 4 stars. I’m definitely putting the sequel, Hunting Prince Dracula, on my TBR list. But I already know I will probably be super scared reading it!

Presented by James Patterson's new children's imprint, this deliciously creepy horror novel has a storyline inspired by the Ripper murders and an unexpected, blood-chilling conclusion... Seventeen-year-old Audrey Rose Wadsworth was born a lord's daughter, with a life of wealth and privilege stretched out before her. But between the social teas and silk dress fittings, she leads a forbidden secret life. Against her stern father's wishes and society's expectations, Audrey often slips away to her uncle's laboratory to study the gruesome practice of forensic medicine. When her work on a string of savagely killed corpses drags Audrey into the investigation of a serial murderer, her search for answers brings her close to her own sheltered world. The story's shocking twists and turns, augmented with real, sinister period photos, will make this dazzling debut from author Kerri Maniscalco impossible to forget.