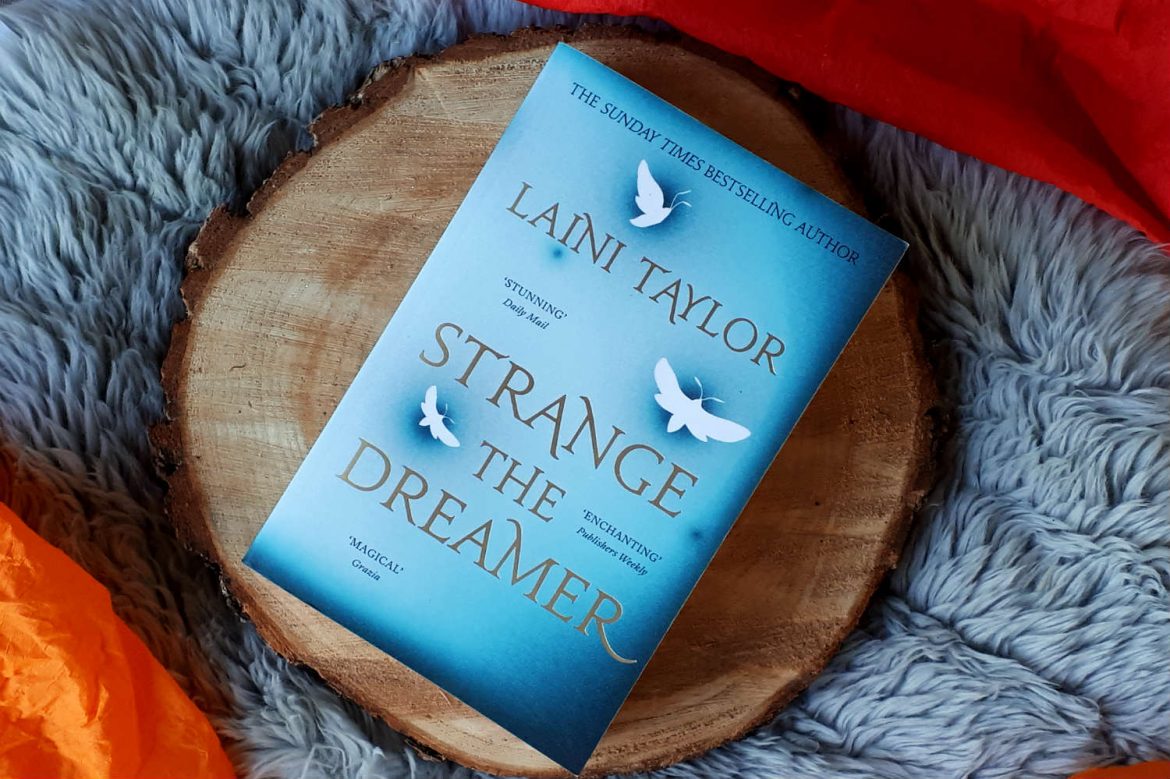 Have you ever been nervous about reading a book? I sure have! I had heard so many good things about Strange the Dreamer by Laini Taylor that I was afraid of picking it up. What if I didn’t like it as much as everyone else? So when I bought this book, it ended up on my pile of unread books for a few months. Until I finally decided to go for it.

Lazlo Strange is an orphan and junior librarian. He spends his days between books, while wondering about the lost city of Weep. One day, a delegation arrives, led by the mythical Godslayer, looking for people to accompany them to Weep and to help solve a mysterious problem. This is the perfect chance for Lazlo, but he is in no way prepared for what awaits them in the city he has always dreamt about.

So now you probably want to know what I think of this book, right? Unfortunately, it’s impossible to find the right words. I can however tell you what I loved about it: EVERYTHING! Throughout this book, I found myself thinking “how did a human mind come up with this story”. It’s so different from anything I’ve read before and every single page was a delight.

Strange the Dreamer focuses on Lazlo, who travels to Weep to learn what happened there all those years ago, and Sarai, who lives in the citadel high above the city. I loved both of them and I adored their interactions. Minor detail: this is a serious case of instalove. I’m usually not a big fan of those kinds of romances, but here it never really bothered me. It was great to see how their relationship grew and how they both explored these new feelings.

Shed a tear for Weep

Another thing I’m not a fan of, is flowery prose with long, detailed descriptions. But again, here it just worked, like Laini Taylor found the perfect equilibrium. Don’t expect a book filled with adrenaline rushes and action sequences. It gradually builds up to the finale, but this is a book that is all about the journey and not just the destination.

If you need more proof of how amazing I think Strange the Dreamer is: I rarely cry over books, but here I had tears in my eyes. And not just at one particular point in the story, but several times. I was moved by the story, by the characters and by the writing.

We are left with a number of questions at the end, but there’s no need to despair. Muse of the Nightmares, the sequel and finale to this duology, was published earlier this year. Unfortunately, I was stupid when buying Strange the Dreamer and didn’t pay attention to which edition I got. The matching edition of this sequel hasn’t been published yet, so either I have to wait a bit longer to find out how it all ends (oh, the horror), or get non-matching covers (oh, the even greater horror). The life of a bookworm is hard, I tell you!

An instant New York Times bestseller and Michael L. Printz honor book! Eleven best of lists including an NPR Best Book, a Goodreads Best YA Fantasy and Science Fiction Nominee, and more! From National Book Award finalist Laini Taylor comes an epic fantasy about a mythic lost city and its dark past. The dream chooses the dreamer, not the other way around--and Lazlo Strange, war orphan and junior librarian, has always feared that his dream chose poorly. Since he was five years old, he's been obsessed with the mythic lost city of Weep, but it would take someone bolder than he to cross half the world in search of it. Then a stunning opportunity presents itself, in the form of a hero called the Godslayer and a band of legendary warriors, and he has to seize his chance or lose his dream forever. What happened in Weep two hundred years ago to cut it off from the rest of the world? And who is the blue-skinned goddess who appears in Lazlo's dreams? In this sweeping and breathtaking novel by National Book Award finalist Laini Taylor, author of the New York Times bestselling Daughter of Smoke & Bone trilogy, the shadow of the past is as real as the ghosts who haunt the citadel of murdered gods. Fall into a mythical world of dread and wonder, moths and nightmares, love and carnage. The answers await in Weep.