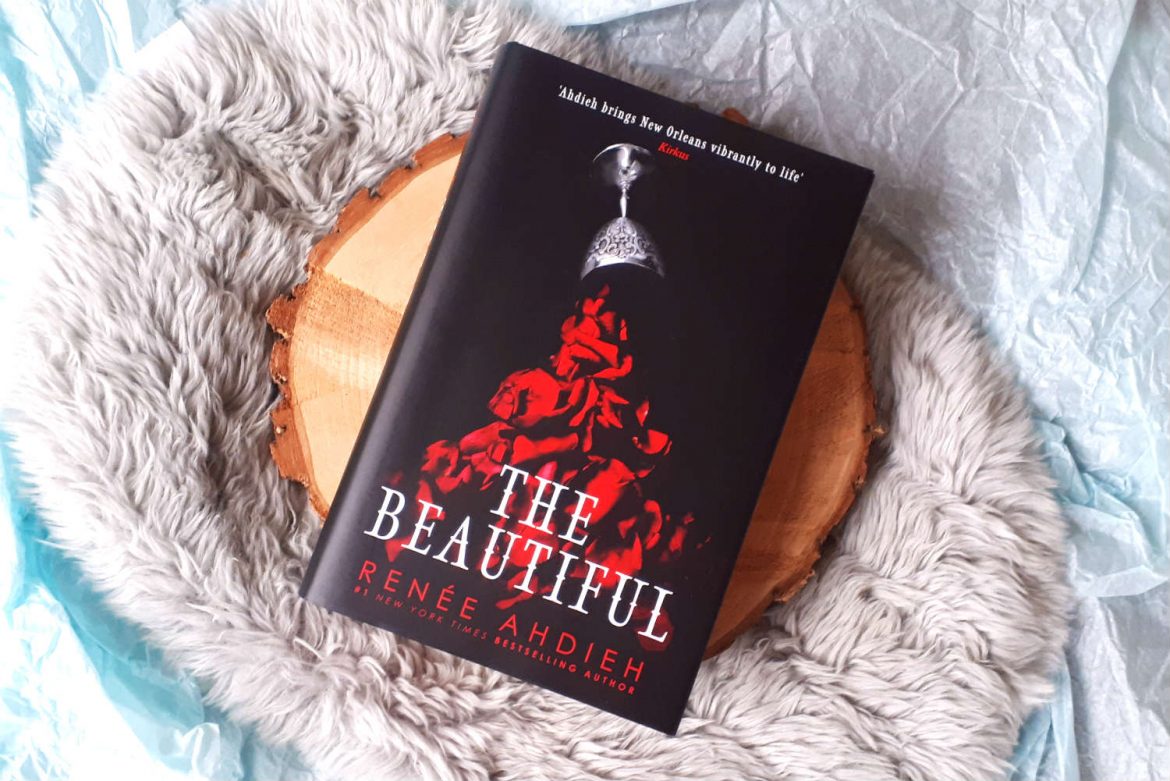 Hi everyone! How’s your reading challenge coming along? I’m perfectly on track to reach my goal of reading 45 books by the end of this year. It helps to have books that just draw you in and that you can’t put down. What, did I just read 100 pages in one sitting?! One of the books that surprised me like that was Flame in the Mist by Renée Ahdieh. So you can imagine how excited I was about her latest novel, The Beautiful! Here’s my review.

The year is 1872. Celine has just arrived in New Orleans after being forced to flee Paris. She is taken in by the sisters of the Ursuline convent together with six other girls. Soon, Celine finds herself drawn into the underworld of the city, known as La Cour des Lions, where she catches the eye of its leader, Sébastien Saint Germain. But when the body of one of the girls from the convent is found in the lair of La Cour, Celine has to battle her attraction to and suspicions about Sébastien. When more bodies are discovered, it seems that the killer has set Celine in his sights…

So this was presented as the next big vampire book. It sure looks likes the bloodsuckers are making a comeback a few years after the Twilight hype has faded. But The Beautiful didn’t have as much vampire-y stuff as I’d expected. Yes, there are supernatural creatures and victims are drained of their blood. But it’s not like vampires simply stroll on the page. Not that it bothered me, but I just wanted you to know what to expect.

I loved both Celine and Sébastien, and their interactions. Although I have to say that Celine felt like a 21st-century woman in 19th-century New Orleans. Her opinions and look on the world all seemed distinctly modern, but that doesn’t mean I didn’t like her. Oh no, I definitely did! Sébastien was also a great character whose main talents in this book appear to be brooding and smirking. Which, let’s be honest, is exactly how we like our YA love interests.

Like with Flame in the Mist, the story and writing in The Beautiful were amazing! I just couldn’t put this one down. However, it left me confused after turning the final page… The denizens of La Cour are shadowy figures and they remain shrouded in mystery throughout the book. I’m not entirely sure who/what they are, to be honest. There are also several factions in this story and it’s not quite clear to me which faction is what and what their relation to the other factions is. Hopefully the sequel will explain that better.

Because yes, I absolutely will read the sequel, which is titled The Damned. It’s slated for publication in June 2020, so that’s not too much of a wait. In the meantime, I’ll just have to stare at both of these gorgeous covers and swoon over Sébastien. Feel free to join me, I can really recommend this book that gets 4 stars from me!

New York Times bestselling author Renée Ahdieh returns with a sumptuous, sultry and romantic new series set in 19th century New Orleans where vampires hide in plain sight. In 1872, New Orleans is a city ruled by the dead. But to seventeen-year-old Celine Rousseau, New Orleans provides her a refuge after she's forced to flee her life as a dressmaker in Paris. Taken in by the sisters of the Ursuline convent along with six other girls, Celine quickly becomes enamored with the vibrant city from the music to the food to the soirées and--especially--to the danger. She soon becomes embroiled in the city's glitzy underworld, known as Le Cour des Lions, after catching the eye of the group's leader, the enigmatic Sèbastien Saint Germain. When the body of one of the girls from the convent is found in the lair of Le Cour des Lions, Celine battles her attraction to him and suspicions about Sèbastien's guilt along with the shame of her own horrible secret. When more bodies are discovered, each crime more gruesome than the last, Celine and New Orleans become gripped by the terror of a serial killer on the loose--one Celine is sure has set her in his sights . . . and who may even be the young man who has stolen her heart. As the murders continue to go unsolved, Celine takes matters into her own hands and soon uncovers something even more shocking: an age-old feud from the darkest creatures of the underworld reveals a truth about Celine she always suspected simmered just beneath the surface. At once a sultry romance and a thrilling murder mystery, master storyteller Renée Ahdieh embarks on her most potent fantasy series yet: The Beautiful.