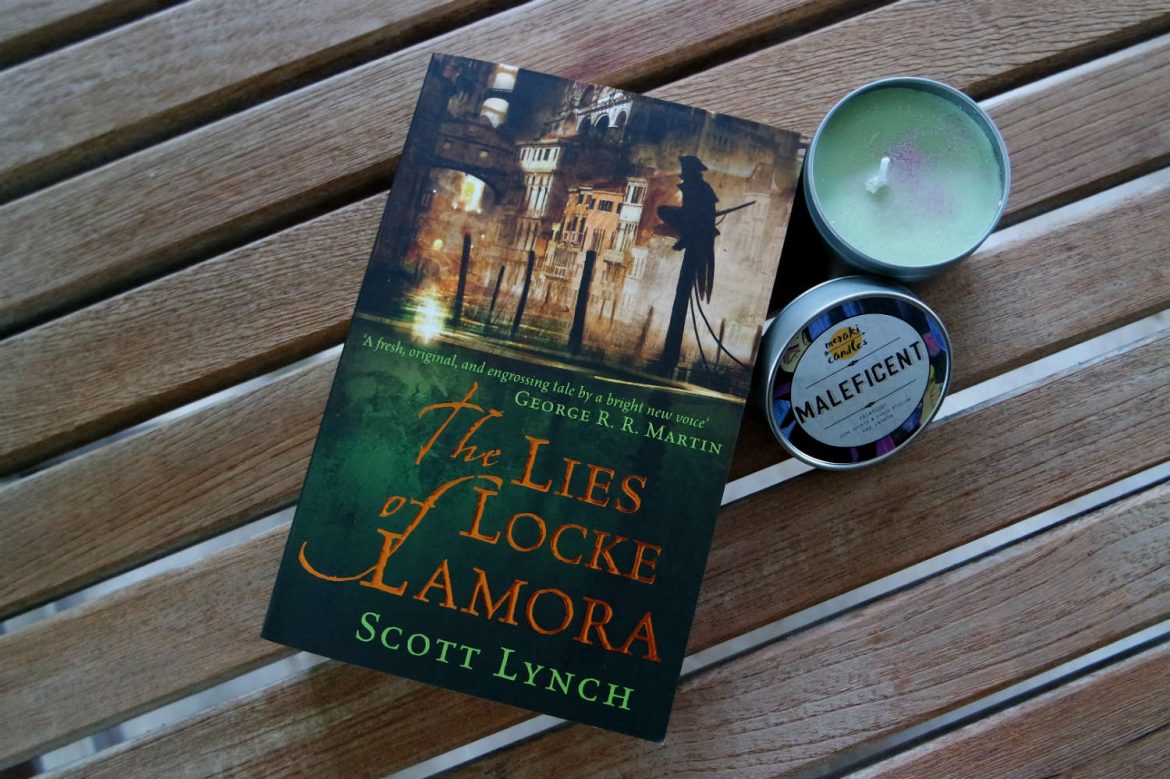 Once upon a time… I was at a book fair and at the only booth that focused on English books, I found The Lies of Locke Lamora. Since I had seen that book mentioned on Instagram a week earlier, it caught my eye. And because the synopsis reminded me a bit of Six of Crows (or rather, Crooked Kingdom), I had to buy it.

Scott Lynch wrote his The Lies of Locke Lamora about 10 years before Leigh Bardugo unleashed Kaz Brekker on the world. There are clear similarities between Kaz and Locke. Both of them have a rather unfortunate start at life, but find themselves leading a gang of criminals at a young age. And both of them end up in a gang war.

In The Lies of Locke Lamora, we join our main character and his friends, the Gentleman Bastards. In their latest scam they try to relieve a nobleman from his considerable richness. But then the Grey King, a mysterious stranger with a grudge against the king of the underworld, shows up. Locke and his friends are drawn into this power struggle and need all their wits to survive.

Meanwhile, we also get some insight in how Locke, a young orphan with a big mouth, came to be the leader of the Gentleman Bastards. I loved these flashbacks, since they often were quite funny. They even made me laugh out loud a few times. Unfortunately, as soon as the main story speeds up, these flashbacks disappear and it feels like we’re missing part of the history. How did Bug end up with the gang? How or when did their mentor die?

Despite these flashbacks, it’s a fast-paced story. The book is over 500 pages long but it only took me 4 days to read it and I’m not the fastest reader out there. I just couldn’t put it down and it had my full attention. That says something because I easily get distr- SQUIRREL!

One major difference with Kaz Brekker and his Crooked Kingdom, is the violence in this book. There is a lot, and it is rather explicit. As you might remember from my Nevernight review, I don’t mind this at all. Meaning I enjoy it in a weird way. Hey, it’s a violent war in the underworld, people get killed and it will be ugly.

The setting is a fantasy version of Venice, with structures that are left behind by an older civilization that has disappeared. While I can see the appeal of a city with canals, it’s starting to become a bit of a cliché by now. This is not Lynch’s fault of course, but seriously, think about it. How many fantasy books have you read recently that are set in a alternate version of Venice or Amsterdam? Or is it just coincidence on my part…?

Anyway, I immediately put the sequel, Red Seas Under Red Skies, on my TBR list. There is also a third book available (The Republic of Thieves), and number 4 is in the works. But it seems Scott Lynch suffers from GRRMartinitis and it’s taking him forever to finish it. Not that I mind this a lot, it’s just a warning for people who like to read the entire series in one go. Which I totally understand in this case.

So to summarize: I absolutely loved The Lies of Locke Lamora and adore Locke himself as well. Yes, I know he’s a criminal, but go read the book and try telling me you don’t like him. Basically just go read this book, it’s worth it.

Debut author Lynch pens a witty and fast-paced narrative that is nearly as much of a con as the wily schemes of its hero.