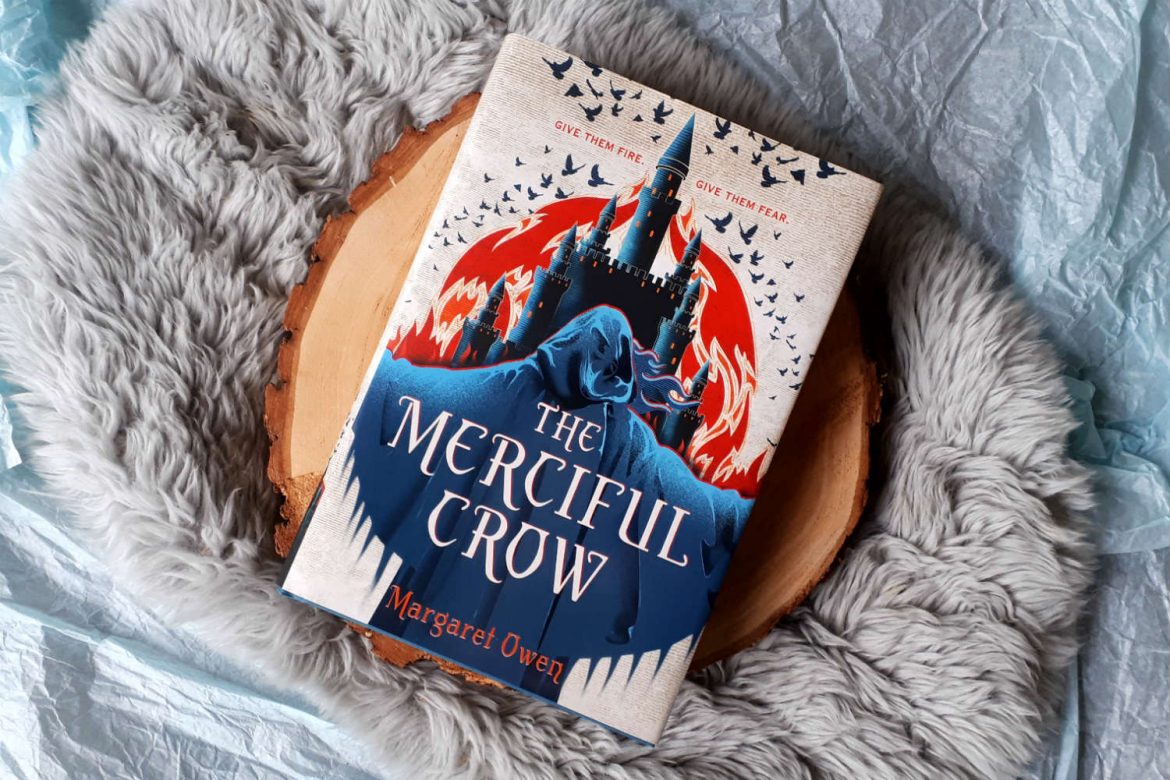 Hi everyone! Who is ready for Halloween? Any books in particular you want to read this week? Let me know in the comments below! And if you’re still looking for a recommendation, might I suggest a book about a girl who extracts magic from teeth. Yes, teeth! Here’s my review of The Merciful Crow by Margaret Owen!

Fie belongs to the Crow caste, the lowest tier in society. They travel around, working as undertakers. When they’re called to the royal palace to collect the body of the crown prince. However, crown prince Jasimir turns out to have faked his own death and he strikes a bargain with Fie: protect him from a ruthless queen, and he’ll protect the Crows when he becomes king. Together with Jasimir’s bodyguard, Tavin, they set out on their journey.

Aaaagh, I was really excited about this book and it ended up being so much fun! If you want to relax with a great story, this is definitely one I would recommend to you! It’s also perfect for this time of year, if you ask me.

Although… relaxing is not always possible with The Merciful Crow, because this book was action-packed. Seriously, there were rarely any dull moments and our main characters went from one threat to the next tight situation. There weren’t a lot of sudden plot twists, but all the action still made it an entertaining read.

I absolutely ADORED the castes and the magic system! This society is divided into several castes, all named for birds. For example: Phoenixes are the royal caste and they have fire magic, while the Peacocks have glamour power. There are several other castes, which I’m not going to explain here (but there’s an overview at the beginning of the book, so don’t worry about being confused by the castes).

But I do want to mention the Crows, of course. They are the lowest caste and have no real power of their own. Instead, they can extract magic from the teeth of other people: give them a Peacock tooth and they can glamour people. How freaking cool is that?! That has to be one of the most original and creative forms of magic I’ve read in a looooong time.

(I do think there’s more to this magic and the castes, since their powers are called “birthrights” and there is frequent mention of dead gods. Luckily, we have a sequel to look forward to in the summer of 2020!)

So let’s talk about the main characters for a moment. Fie, the protagonist, is fierce as hell. I loved her to bits. It was great to see how she taught the prince and his bodyguard about the hardships of life as a Crow. And the love interest! He was great as well and definitely someone I would crush on in real life.

Just one small note: the writing was a bit dense and I found my reading speed was slower than usual. Not that it bothered me, because that meant I got to spend more time in this world. But I just wanted you to know about it.

But don’t let that stop you from picking up this book. The Merciful Crow was really great and fun. The magic system was creative and the main characters earned themselves a place in my heart. So yes, this gets a full 5 stars from me!

One way or another, we always feed the crows.

Fie abides by one rule: look after your own. Her Crow caste of undertakers and mercy-killers takes more abuse than coin, but when they’re called to collect royal dead, she’s hoping they’ll find the payout of a lifetime.

When Crown Prince Jasimir turns out to have faked his death, Fie’s ready to cut her losses—and perhaps his throat. But he offers a wager that she can’t refuse: protect him from a ruthless queen, and he’ll protect the Crows when he reigns.

Hawk warrior Tavin has always put Jas’s life before his, magically assuming the prince’s appearance and shadowing his every step. But what happens when Tavin begins to want something to call his own?